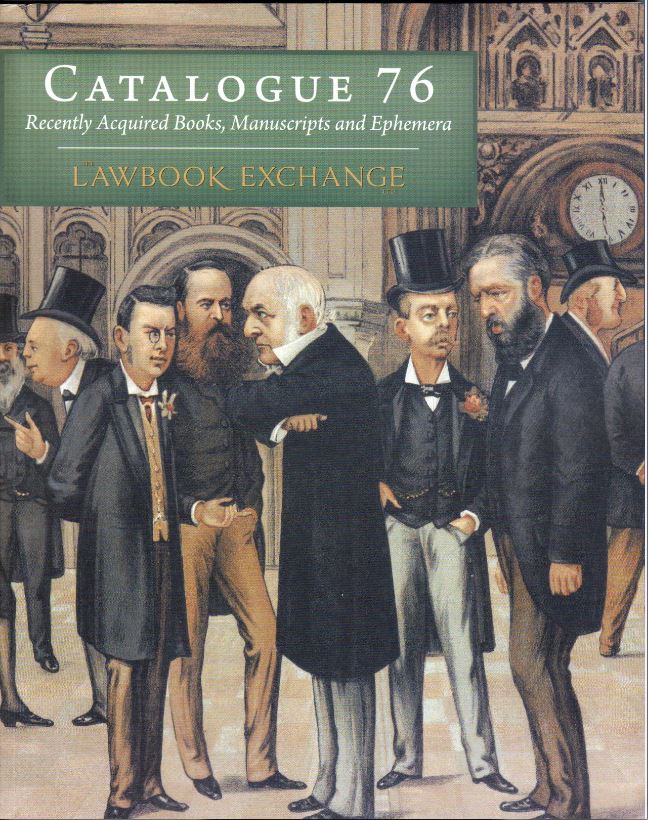 The Lawbook Exchange has issued its Catalogue 76 of Recently Acquired Books, Manuscripts and Ephemera. It is filed with significant legal and constitutional texts for serious scholars and collectors. There are also some books for the less scholarly among us, tales of gruesome murders and other horrible crimes centuries ago. These are the “fun” books. Today, we would hear about such things on TV or the internet, stories lost as soon as the electrons stop flowing. Back then, these tales had to be printed in books and pamphlets, preserving them for our entertainment today, just as they entertained an earlier generation with their lurid details. Here are a few items found in this latest Lawbook catalogue.

Probably the most significant book ever written about the United States was Frenchman Alexis de Toqueville's account of Democracy in America, written in the 1830's. However, de Toqueville did not come to America to learn about its political institutions. He came to study its prison system. His famous book would come a few years later as he wrote about what else he had learned on his visit. His first account concerns American prisons and it is here offered as item 3: Du Systeme Penitentiare aux Etats-Unis at de son Application en France... (the prison system in the United States and its application to France). It was co-written with Gustave de Beaumont and published in 1833, two years before the first part of his book on American democracy. The two spent nine months traveling around the United States observing prisons, interviewing both wardens and prisoners. It led them to advocate prison reform in their own country. Priced at $2,500.

If you are wondering who are those gentlemen on the cover of this catalogue, it is a group that was gathered in The Lobby of the House of Commons, 1886. This caricature appeared in Vanity Fair on November 30, 1886, and features such politicians of the day as William Gladstone, Lord Randoph Churchill, and Charles Stewart Parnell. The artist was “Lib,” the name used by Liberio Pesperi. Vanity Fair was published from 1869-1914, with around 2,400 caricatures appearing during its run. Twenty-one of these were published in double-page prints and also printed separately. This is evidently a separately issued print since it lacks the vertical crease of those included in the magazine. Item 73. $350.

Item 41 is one the Lawbook Exchange describes as “the first work devoted to laws relating to women.” Attributed to Thomas Edgar and published in 1632 (only edition), the title is The Lawes Resolutions of Womens Rights: Or, the Lawes Provision for Woemen. The anonymous work is also referred to as The Womens Lawyer. It covers issues relating to women, including dower, age of consent, divorce, descent, rape, and many more. $9,500.