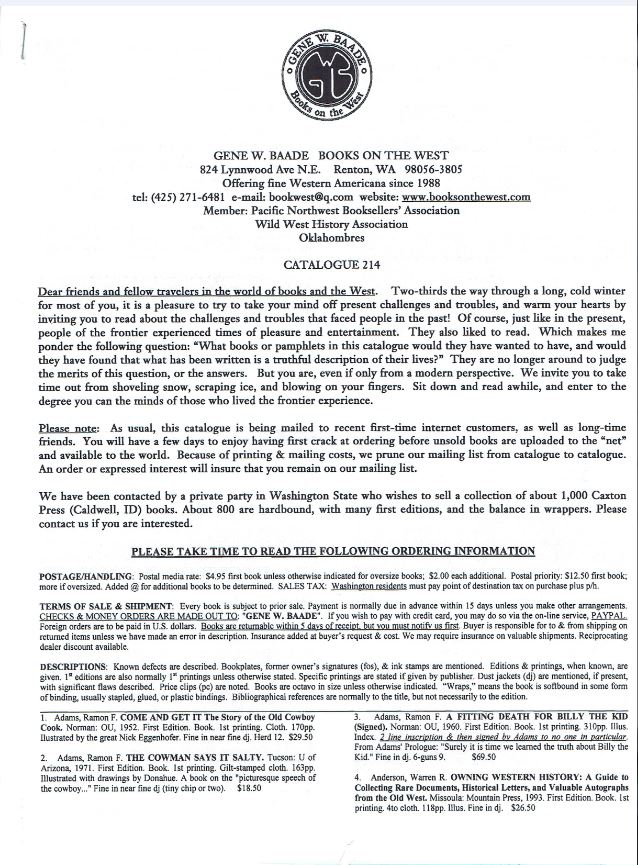 Gene W. Baade Books on the West has released Catalogue 214. Offered is a selection of Western Americana, much of it obscure, almost all very affordable. Here is a catalogue for time travelers, either by horse or early automobile, back to the days when the West was wild, but starting to be tamed. These are a few of the selections.

We will start with one of the great mysteries of the Old West: True Story of Jacob Walzer and His Famous Hidden Gold Mine (The Lost Dutchman), by Charles Higham. This book was privately published in 1946 or 1948, but the Lost Dutchman is still lost today. Walzer was a German immigrant who had a farm east of Phoenix and reputedly gave a deathbed confession of having been told of the location of a fabulously rich gold mine in the barren hills of Arizona. Not surprisingly, the legend led to its share of gold seekers. Forty years after Walzer's death in 1891, another person supposedly found the mine, only to be murdered. This really upped the ante on the search, leading many more to believe there must be such a mine. They were searching in the 1940's and prospectors still come to Arizona every year in a vain hope of being the one who finally finds the missing gold, which more than likely does not exist. The exact spelling of Walzer's name is unclear, with many variants offered. This copy is annotated by an earlier owner with claims that his name was actually spelled “Wolz.” Item 65. Priced at $95.

Item 24 is a collection of personal tales entitled Tell Me A Story, by Laura E. Crews, published in 1970. Laura Crews and numerous of her family members participated in the Oklahoma Land Run of the early 1890's. You may be wondering where her stories were hidden all of those years, not to be published until 1970. The answer is that Laura hadn't gotten around to writing them yet. You see, Laura was the last survivor of the Land Run, not finishing her memoirs until 1967. She was 99 when her book was finally published, and even then she was not through. Miss Crews lived to be 105. She never married, but raised many nieces and nephews whose parents did not survive a fraction as long as she did. Laura did have one bit of good fortune – the land she claimed in the Run was over an oil field from which she was able to collect royalties. This copy is inscribed by the author to two of her nephews and nieces. $35.

Item 156 is a 1903 book about the Elks of Washington. No, this is not about large animals wandering about the countryside of the great northwestern state. These are the fraternal Elks, the Benevolent and Protective order of Elks. This obscure book has sections on Elk history, national Elks, and those from Washington State. Several prominent Elks are captured in illustrations. Many others are referenced by name. This was the time of the height of fraternal lodges, and while membership has declined over the years, the Elks still have hundreds of thousands of members around the country today. $250.

Item 97 is a Wolf Bounty Certificate from 1887, perhaps explaining why these animals were nearly hunted out of existence in the American West. It was issued to a Ben Strickler who had presented the skins of 11 wolves. In those days, wolves were more common, and ranchers wanted to be rid of the nuisance. Eventually, wolves would be hunted so much that the federal government had to protect them under the Endangered Species Act. That ban was lifted in 2011, so once again, American wolves are being hunted down. This bounty certificate was issued by the Justice of the Peace of Choteau County, Montana, and is also signed by two witnesses. $100.

Here is a creature much rarer than a wolf, and as hard to find as the Lost Dutchman Mine. We suspect for the same reason, though many will disagree vehemently with that observation. Item 137 is First Photos of “Bigfoot,” California's Legendary “Abominable Snowman.” They appear in an article by Ivan Sanderson in this February 1968 issue of Argosy Magazine (along with numerous other articles). The pictures were taken from the classic 1967 home movie of Roger Patterson and Bob Gimlin. It was taken near Bluff Creek, California, just one of many strange goings-on in the Golden State. In the movie, the creature saunters by, to some looking suspiciously like a man in a monkey suit, to others its movements saying it can only be the real thing. You decide. This copy has been signed by Bob Gimlin under a photograph of him and Patterson. “Patty,” the name they gave the sasquatch, has not signed it. If she had, the price would be much higher. $100.