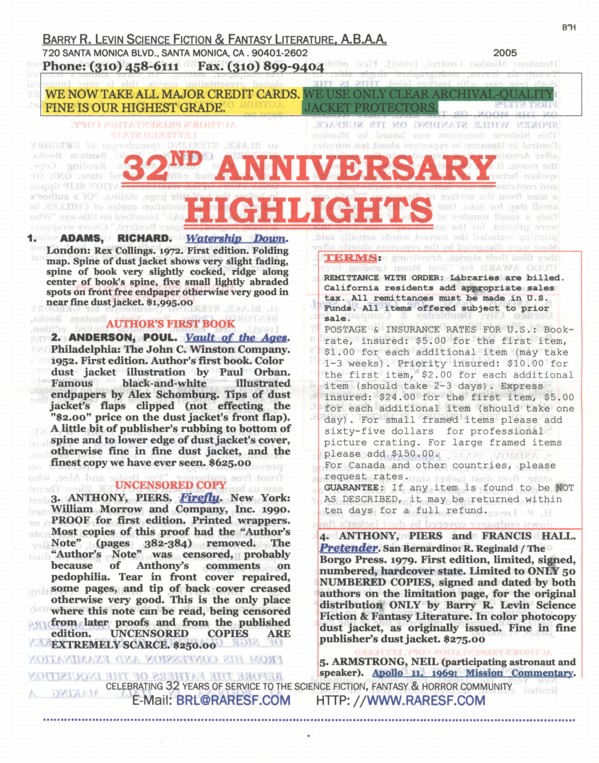 This is our first review of a catalogue from Barry R. Levin Science Fiction & Fantasy Literature. It is hardly the first catalogue from Levin. In fact, we are starting with their "32nd Anniversary Highlights." Levin, of Santa Monica, California, is a major dealer in the fantasy and science fiction field. Most of the books in this catalogue are either first editions, or special printings and signed copies. While the tales may be quite fantastic, the books are very real. Here are a few of them.

One of the favorite subjects of fantasy literature is the discovery of a lost race. Here is a very early example. The title is, The Memoirs of Sigr Guadentio Di Lucca...Making a Discovery of an Unknown Country in the Midst of the Vast Deserts of Africa... Mr. Di Lucca tells of the ancient and highly civilized society he finds deep inside the continent. He recounts their history, customs, religion, and how they got across the deserts in the first place. The book was copied from the original manuscript kept at St. Mark's Library in Venice, and translated to English from the original Italian. Of course, this part is as fake as the story itself. It was written in English and published anonymously, though the author is now known to be Simon Berington. Along with "lost race" collections, this book fits a collection of utopian books as well. Item 13. Published in 1737. Priced at $1,500.

Edgar Rice Burroughs is indelibly linked to his famous character, Tarzan of the Apes. Those books certainly fit into the character of fantasy, but fewer people are aware that Burroughs was, even before Tarzan, a science fiction writer. In fact, he produced both a Mars and a Venus series of books, along with many others. If nothing, Burroughs was prolific. And while few people, including Burroughs himself, considered his work great literature, it was, and still is, amazingly popular. Item 26 is the original contract Burroughs signed with publisher A.C. McClurg & Co. for the first edition of his 1922 novel, The Chessmen of Mars. The contract comes in a frame with a picture of Burroughs. $6,500. Item 27 is a copy of the first edition of the first of Burroughs' Mars series, A Princess of Mars. Published by McClurg in 1917. $800.

Another science fiction writer better remembered for other things is L. Ron Hubbard. Hubbard, of course, was the founder of the Church of Scientology, which has attracted several celebrities and many followers, while also generating its share of controversy along the way. While science fiction is what Hubbard is second most remembered for, he also wrote a few westerns. In fact, his first book was a western. It portrays the Blackfeet Indians at the time of Lewis and Clark and problems encountered with the Hudson's Bay Company. The book takes the perspective of a white child raised by Indians, and is said to be sympathetic to the Native Americans' situation, somewhat unusual for the time (1937). The book was published shortly before Hubbard began developing the theories which became scientology. Its title is Buckskin Brigades, and this is a first edition with its rare dust jacket. Item 57. $5,000.