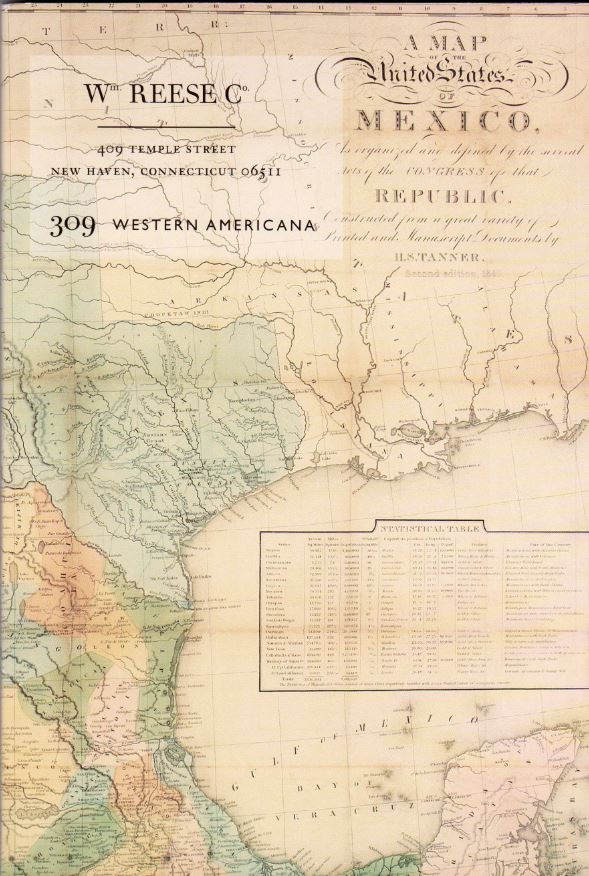 The William Reese Company has issued a catalogue of Western Americana, their catalogue number 309. It contains all new material for the firm, acquired in 2013. It includes a mix of books and one-of-a-kind manuscripts and photographs. The great majority of items are from the 19th century. There was not much written about the area prior to the 19th century, while later material is not quite “Old West” western Americana, hence the concentration from the 1800's to early 1900's. The works offered are historic, significant, and desirable to anyone fascinated with the American West in its youth. Here are a few samples.

We start with a remarkable letter written by Sam Houston in 1855. Houston was a Texas senator at the time he wrote to fellow Texas Senator Thomas J. Rusk. Houston was seeking the nomination of the Know-Nothing Party, then at the peak of its very brief run as a serious contender. While noted for its nativist, anti-immigrant and anti-Catholic positions, the party was surprisingly moderate on the slavery issue. Houston represented a slave state, and was a slaveowner himself, and yet this letter finds him on his way to Boston to speak to the Boston Anti-Slavery Society. Rusk had sent Houston a warning that speaking to this group would be harmful to his political aspirations, but from his train Houston writes, “...I must go on. Under like circumstances Gen. Jackson would have done so. To be honest and fear not is the right path. I would not conceal an honest opinion for the Presidency... I know well it is a risk, but it is for the harmony of the Union, if perchance I benefit it.” Houston did not get that chance, as the Know-Nothings selected a safer candidate, former President Millard Fillmore. However, Houston would remain loyal to the “harmony of the Union,” being removed from his office as Governor of Texas in 1861 when he refused to take an oath of loyalty to the Confederacy after opposing secession. Priced at $6,750.

Item 118 is a Mexican War letter which also contains some very interesting political observations. It was written by William Wallace Smith Bliss to a fellow soldier, Ethan Allen Hitchcock. It is dated July 23, 1846, from Matamoros. Bliss was evidently serving on General Zachary Taylor's staff at the time. He provides some details of the fighting and other conditions in Mexico, but what is perhaps most intriguing is Bliss' opinion of Taylor's presidential ambitions. Taylor was the ultimate reluctant candidate. He expressed no interest in the presidency, and claimed he had never even voted, but his growing popularity made him a desirable candidate for either party. He would eventually agree to run as a Whig in 1848, though he expressed little interest in their programs and did little to support them after he was elected. His popularity came from the belief that he was a man of principle, rather than politics, and by essentially taking no public stands on the issues of the day, managed to avoid seriously offending voters either North or South. In 1846, Bliss accounts that Taylor was already receiving a steady flow of letters urging him to seek the presidency. Based on his observations, Bliss is convinced Taylor will not do so. Writes Bliss, “The General is pestered with all sorts of presents and complimentary letters... But his greatest torment is the Presidential question... He replies to all these (I believe, for I am happily rid of this part of the correspondence) that he has no views to the Presidency – that he is opposed to the elevation to that office of any military chief – and that above all he does not wish his name used in any such connection while operating in the field, as it might inspire the Govt. with distrust and impair his usefulness. Depend upon it, he has no higher ambition than to retire to the bosom of his family. I cannot believe that he will suffer himself to be brought forward as a candidate under any circumstances.” Wrong! $2,850.

Next up is one of the more recent items in this catalogue, a photo album with the manuscript title Souvenir of a Pleasant Month. It was compiled by Mr. and Mrs. C. B. Riker of California. They had engaged on a road trip through California and Arizona. This was no longer the Old West, but the beginning of the New West, as the Rikers traveled by automobile rather than horse. Nonetheless, it would have been primitive, and perhaps not so “pleasant” by today's standards. They traveled during 1915, when roads were still mostly primitive. The Lincoln Highway had only just connected East and West a short time earlier. The album includes photographs of Los Angeles, Santa Barbara, and San Diego, including 15 of the 1915 San Diego Exposition. They head north and visit Monterey, Carmel, Santa Cruz and Palo Alto. In San Francisco, they snap photographs of the buildings of the Panama Pacific Exhibition. Another 50 photos capture a camping trip to Yosemite. They also move on to Arizona where they photograph the Grand Canyon and the Petrified Forest. Item 26. $950.