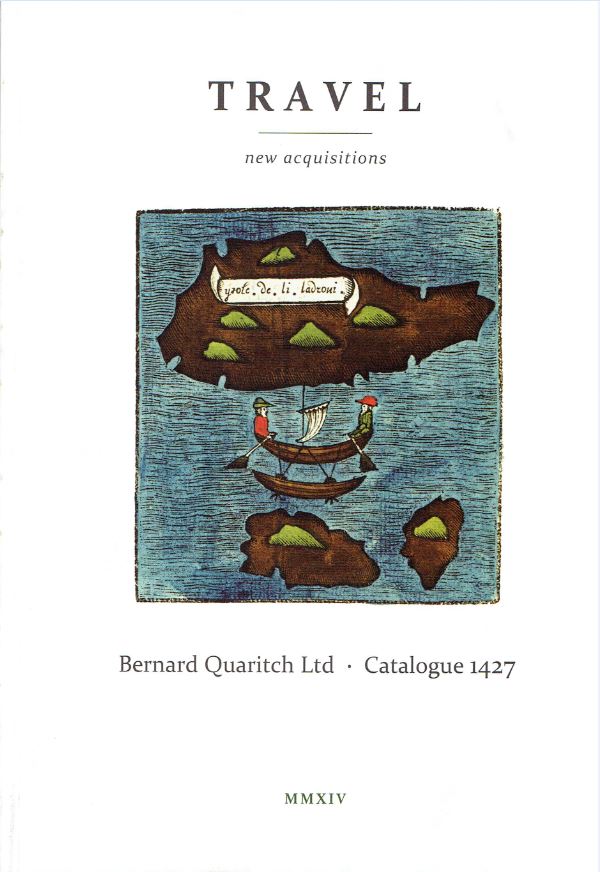 Bernard Quaritch Ltd. has issued their Catalogue 1427. Travel, New Acquisitions. Offered is a collection of travel accounts, ranging from the Age of Discovery by sea, to 19th century inland travels to the heart of still mysterious (to Europeans) continents – Africa, Asia, South America, Australia, Canadian North America, and Antarctica. Most of the explorers were British and the accounts in English, befitting an English bookseller who has been in business since the days of many of these travels. Here are some samples of these new acquisitions.

We will start with one of the earliest and most important of all the voyages of the Age of Discovery. Item 57 is a first edition of Antonio Pigafetta's account of Magellan's first circumnavigation of the globe: Primo viaggio intorno al globo terracqueo ossia ragguaglio della navigazione alle Indie Orientali per la via d'Occidente fatta dal Cavaliere Antonio Pigafetta Patrizio Vicentino Sulla Squadra del Capit. Magaglianes negli anni 1519-1522 (First journey around the globe to the East Indies by way of the West made by Antonio Pigafetta on the crew of Capt. Magellan in the years 1519 to 1522). Magellan's journey was truly amazing. He had no charts, limited ability to calculate latitude, none for longitude, and faced an unknown world populated by unknown peoples. Indeed, his journey established that the world was, in fact, round, and that America was not a part of Asia. Magellan also had to discover the hard to traverse Magellan Strait, the only way to get west of the Americas. The journey was impossibly difficult and the dangers immense, but somehow the circumnavigation was accomplished. However, Ferdinand Magellan was not among those to complete the trip, even if he is credited with the first circumnavigation. He was killed in a dispute in the Philippines. Very few actually circled the globe, only 18 of the original 270, and one of five ships, survived to make it back to the starting point three years later. Antonio Pigafetta was one of them. Though the journey was completed in 1622, Pigafetta's account was not published until 1800. Four manuscripts of his account survived, and this edition, taken from the manuscript in the Ambrosian Library, is likely the most accurate, as it is the only one written in Italian, and Pigafetta was Italian. Priced at £7,000 (British pounds, or approximately $11,687 U.S. dollars).

Here is a later journey that had similar results, at least in terms of what happened to its leader and men. Item 55 is The journal of a mission to the interior of Africa, in the year 1805... by Mungo Park. Park had reached the upper parts of the Niger River in an earlier visit, and returned in 1805 in hopes of riding down it to discover the terminus. The long circuitous route of the Niger results in it terminating in an unexpected location on the African continent. His first journey had been difficult, Park suffering illness and imprisonment by natives, but his second journey was much worse. They set off in the summer, and in the heat, illness spread through the camp. Only 12 of the 45 Europeans who set out survived to reach the river. Park was one of the survivors. However, between illness and hostile natives, the situation continued to deteriorate. Down to just three Europeans, Park was able to send his notes back with a guide, which is why this book exists. Neither Park nor the others ever returned, with it later was determined they were attacked by hostile natives. Offered is a copy of the second edition from 1815, which added additional information, biographical data about Park, and recollections of Park by Walter Scott. Novelist and poet Scott and Park met a year before this journey and became friends. £600 (US $1,001).

As long as we are focusing on tragic journeys, here is one more. However, this one differs from the others in that the Captain survived. In fact, he made out like a bandit, which, in reality, is what he was. Item 2 is A voyage round the world, in the years [1740-1744]...by George Anson. The journey was by George Anson. The book, technically, was by Richard Walter, a chaplain on one of Anson's ships, though it effectively is Anson's account. Anson set out for South America with six ships, his aim to intercept Spanish shipping, a polite description of piracy. The ships suffered all kinds of problems attempting to get through the Strait of Magellan. Only one ship made it, the others sinking or turning back. Between sinkings, disease, and other problems, most of Anson's men died. Still, he pushed on, continuing a circumnavigation. On the way back, he captured a Spanish vessel laden with treasure. Though most of his men died, Anson returned home a rich man. £3,000 (US $5,005).

Item 89 is A narrative of travels on the Amazon and Rio Negro... by Alfred Russel Wallace, published in 1853. Wallace undertook a journey to South America with his friend, naturalist Henry Walter Bates. He collected many specimens and studied the natural history, geology, and native tribes of the region. He was also trying to understand something deeper. He was familiar with the concept of evolution, but not the mechanism which brought it about. Those who believed in evolution pre-Darwin thought there was something inherent in the species that led it to improve itself. It would not be until after his return, and much deep evaluation, that Wallace would come up with a theory of natural selection. Of course, that is what Darwin had concluded, but he had yet to publish his theory. Wallace reached the same conclusion independently, but when he first announced his findings, Darwin was forced to publish (together with Wallace) his theory. £4,000 (US $6,678).