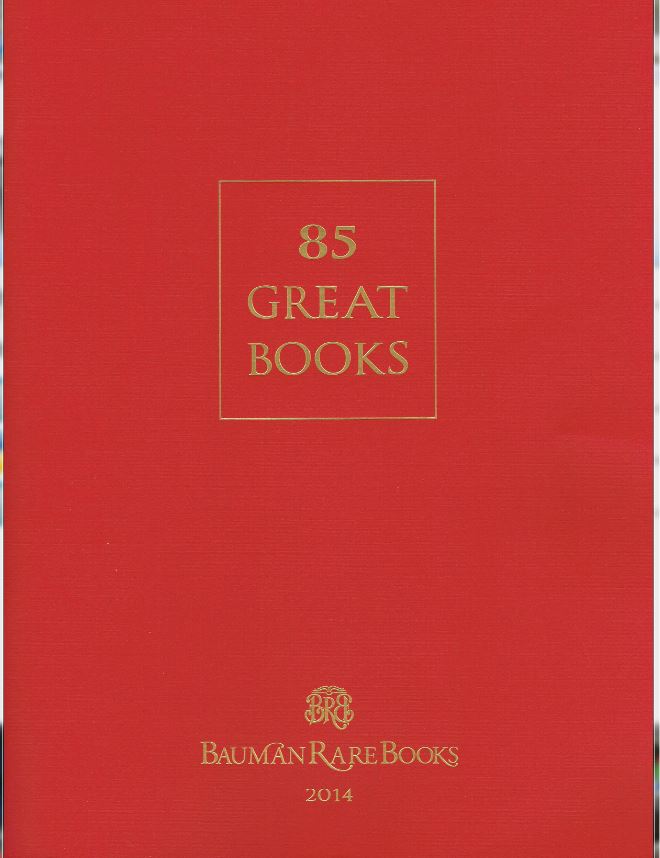 Bauman Rare Books has released a catalogue of 85 Great Books. The title is no exaggeration. There aren't many names here you won't recognize as greats. You will find books by or about Washington and Lincoln, Alexander the Great to Churchill, Einstein and Newton, the Magna Carta and the Declaration of Independence, Audubon to Goya, Pike and Mackenzie, Shakespeare and Seuss, the Bible and Darwin (and Pope too!). This is a catalogue for collectors at the highest level, with books that reach the stars. Here are just a few of them.

Item 2 was the most comprehensive history of the world ever printed, at least as of 1493. Hartmann Schedel believed his hometown of Nuremberg and the German nation had been shortchanged in most accounts of history, so he wrote one to resolve the problem. It proved to be an enormous undertaking. He went all the way back to biblical times and the beginning of the world, and proceeded right through the present and into the future, predicting the end of times. Along the way, he provided much useful information. The book is titled Liber Chronicarum (this is the first edition, which appeared in Latin), but is generally just known as the Nuremberg Chronicle. Among its notable features is its map of the world, that being the Ptolemaic rendition, the book being published shortly before Columbus returned with his account of the then unknown New World. It contains 1,809 woodcut images printed from 645 blocks (Schedel wasn't above using the same image multiple times). This copy is particularly desirable as it shows the portrait of the mythical Pope Joan uneffaced. Most copies have her portrait blacked out as the Church was not happy with the claim of there having been a female pope, that often being a vehicle to condemn its behavior. Priced at $150,000.

Few fictional works have the impact on the real world as this one: Uncle Tom's Cabin; Or, Life Among the Lowly. This is a first edition of Harriet Beecher Stowe's novel about slave life in the South. At the time it was published – 1852 – there was already enormous tension between North and South. The Compromise of 1850 had forced northerners to return runaway slaves, deeply offensive to them. What Stowe did was to throw more fuel on the fire, by vividly displaying the human (or inhuman) side of slavery. The book quickly sold out and through numerous added editions became widely known around the country and even across the seas. Its influence on attitudes toward slavery was enormous, helping to drive America closer to the inevitable split that would be needed to resolve the issue of slavery. Item 30. $22,500.

It is unusual to be both a leading participant in a major world event and its most notable biographer. Winston Churchill was not an ordinary man. He led Britain through its “darkest hour,” when it stood virtually alone against the onslaught of Nazi Germany. Eventually, he was able to bring others to his cause, and after years of struggle, turn the tide and win the war. After that, the voters of England rewarded Churchill by turning him out of office. He was not pleased, but set down to recounting the history of the war as he planned for his eventual return to office, which came in 1951. His history/memoir was appropriately titled The Second World War, and was published in six volumes from 1948-1954. The first volume is inscribed by Churchill. The set comes with a copy of David A. Thomas' Churchill: The Member for Woodford, published in 1995. Item 18. $17,500.