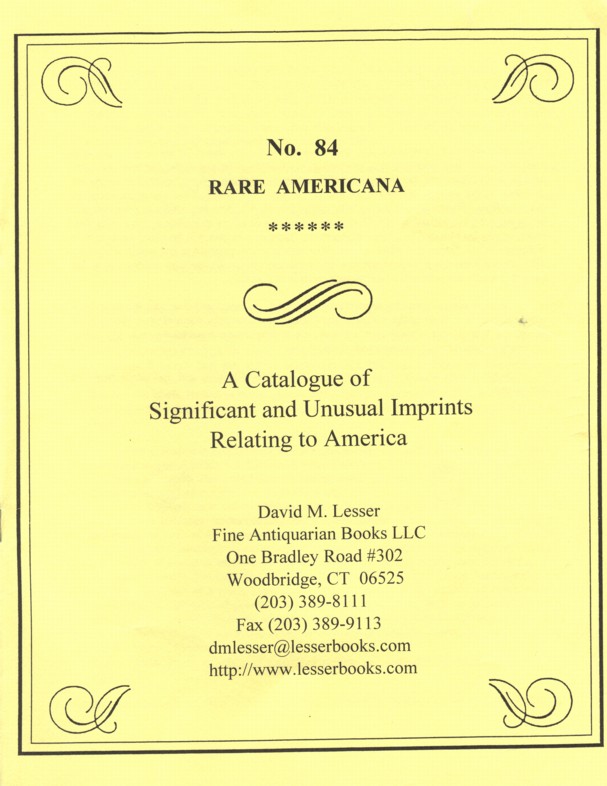 David M. Lesser Fine Antiquarian Books latest catalogue, number 84, fits the mold of the typical Lesser catalogue. It is filled with rare books and ephemera of Americana, mostly from the 18th and 19th centuries, and each piece comes with its own story. Reading through a Lesser catalogue is reading through a series of vignettes of American history. By the time you are finished, you will know a bit more about the nation's past, and in particular, many of the small incidents that led to the major confrontations which shaped its history. Lesser's catalogues are not just book catalogues, but mini-history texts as well. Some of what we found follows.

Item 3 is more than a bit ironic as it is an Extract of a Letter from the House of Representatives of the Masschusetts-Bay proclaiming their loyalty to the British crown, even as it protests mistreatment in the days before the Revolution. The year was 1770, and the colony was upset with taxes, restrictions on imports, and heavy-handed British control of their institutions. Nevertheless, the representatives proclaim, "we cannot be justly suspected of the most distant thoughts of an independence on Great-Britain." For emphasis, they go on to say "it is so far from the truth, that we apprehend the colonies would refuse it [independence] if offered them; and would deem it the greatest misfortune to be obliged to accept it." Methinks they protested too much. They would have jumped on such an offer, but one was never made. Priced at $1,500.

Here is a different take on the British taxes that were a primary cause of the American Revolution. Rev. John Fletcher makes his arguments in American Patriotism Farther Confronted with Reason, Scripture, and the Constitution...with a Scriptural Plea for the Revolted Colonies. In this 1776 book, Rev. Fletcher defends the right of the British to tax the colonists. However, he goes a bit farther than most by claiming that paying British taxes is some sort of religious obligation. "The duty of paying taxes to the protective power, is so strongly connected with Christianity, that the Colonists must practically give up the scriptures, or submit to the reasonable demands of the British legislature," claims Fletcher. No wonder the founding fathers decided to separate church from state. Item 58. $1,500.

One of the uglier political papers of early America was James Callender's The American Annual Register...for the Year 1796, published early the following year. Callender was a shrill opponent of the Federalists, not above making use of scandal to achieve his goals. In this publication, he raises charges of financial dishonesty on the part of Alexander Hamilton relating to payments he made to James Reynolds. This forced Hamilton to reveal the truth - that he was paying Reynolds blackmail to keep quiet about the affair he, Hamilton, was having with Reynolds wife Maria. Item 21. $875.