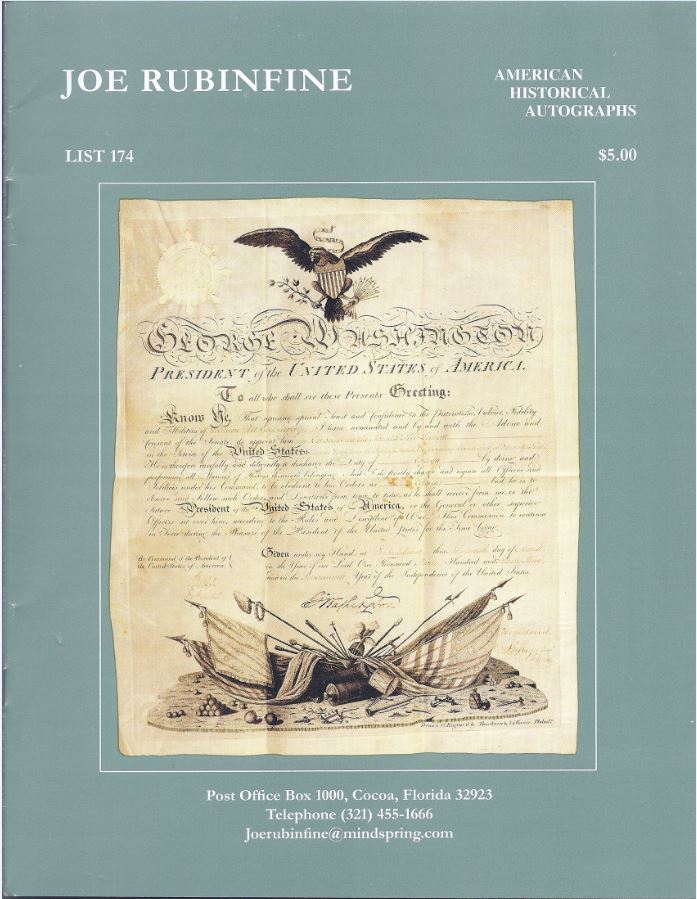 Joe Rubinfine has issued List 174 of American Historical Autographs. This is a collection of documents, occasionally a small form but mostly larger papers, including handwritten letters, from important personalities in American history. Some come from the height of their powers or significance, others from the days before they were well-known, or after their retirement from notable positions. Personal documents give us great insight into the personalities of those we otherwise know only from third-party accounts, often distorted by the opinions of those outsiders. These documents often provide a look into the hearts and minds of those who may have become icons, but were once real people like the rest of us. Here are a few of these documents.

We will start with an amazing letter from one of America's best known soldiers, though more for the wrong reason than the right. George Armstrong Custer will always be remembered for his final defeat because it was so thorough. Neither he nor any of his men survived his one-sided loss in the Battle of Little Big Horn. His reputation was ruined, but his loyal wife, Elizabeth Custer, spent the remaining 57 years of her life rehabilitating the honor of her late husband. General Custer was hardly a great soldier, and his ego a bit oversized, but one thing that cannot be doubted about the General and his wife was the truly devoted love they held for each other. This was a love story few could match. If there is any doubt that Gen. Custer shared the love for Elizabeth that she displayed towards him in her 57 years of widowhood, that should be dispelled by this letter. Item 10 is a letter from Custer to his wife dated January 14, 1869, from Fort Cobb (now Fort Sill) Oklahoma, to Fort Leavenworth, Kansas. It is addressed to “Darling of all the World.” The letter is 39 pages in length. Seriously. Try tweeting or texting that! Obviously, Custer has lots to say. He talks about his brother's loneliness and tendency to drown his sorrows in alcohol. He speaks highly of a newly arrived subordinate, Major Marcus Reno, who would be a major figure in the story of the disaster at Little Big Horn, blamed by many for not providing Custer sufficient support when things went wrong. Others involved in that tragic battle also appear in this letter. Still, what stands out is the enormous affection Custer expresses for his wife. He talks of retrieving the mail late at night because he knew there would be a dozen letters from Elizabeth, and sure enough, his estimate was precisely correct. He received an even dozen from the “Queen of Women.” Custer writes, “...there is a little woman...who can lead her boy whither she chooses...to her will I am ready a slave...they may take the Battle of the Washita and all the renown I have reaped from it – if I can only be permitted to go to you and there remain.” Priced at $100,000.

Here is an ironic item that relates to a forgotten event that changed American history in ways that are incalculable yet will forever be unknown. Item 28 is an official appointment from 1865 by President Andrew Johnson, appointing Hannibal Hamlin as Customs Collector in Boston. The appointment of Hamlin to such a minor post, that served more as a source of income than an important role in government, is unusual. At the start of the year, Hamlin was Vice-President of the United States. Indeed, it was Johnson who had replaced him in that office. President Lincoln had agreed to replace Hamlin with Johnson, not because of any problems with Hamlin, but for political advantage. Hamlin was an anti-slavery Republican from Maine, a constituency Lincoln felt confident in holding in what looked like a very challenging reelection campaign at the time of his nomination. Johnson was a “War Democrat,” a loyal union supporter but otherwise more appealing to less radical and more southern oriented constituencies. Lincoln made the switch for practical political reasons, and Hamlin loyally supported his reelection. Of course, no one could have anticipated what would happen. Lincoln was assassinated, and because of the political switch, it was the new vice-president, Johnson, who succeeded him, rather than Hamlin. His more moderate, sympathetic views toward the South, which almost got him removed from office, were undoubtedly very different from the approach Hamlin would have taken. American history would have turned out differently, though no one can say just how. Johnson likely felt he owed something to Hamlin in making this appointment. However, the latter would resign from this post a year later in protest of Johnson's policies, and returned to the senate in 1868, serving until 1880. Amazingly enough, Hamlin, who died in 1891, outlived the next six vice-presidents who succeeded him in office. $4,500.