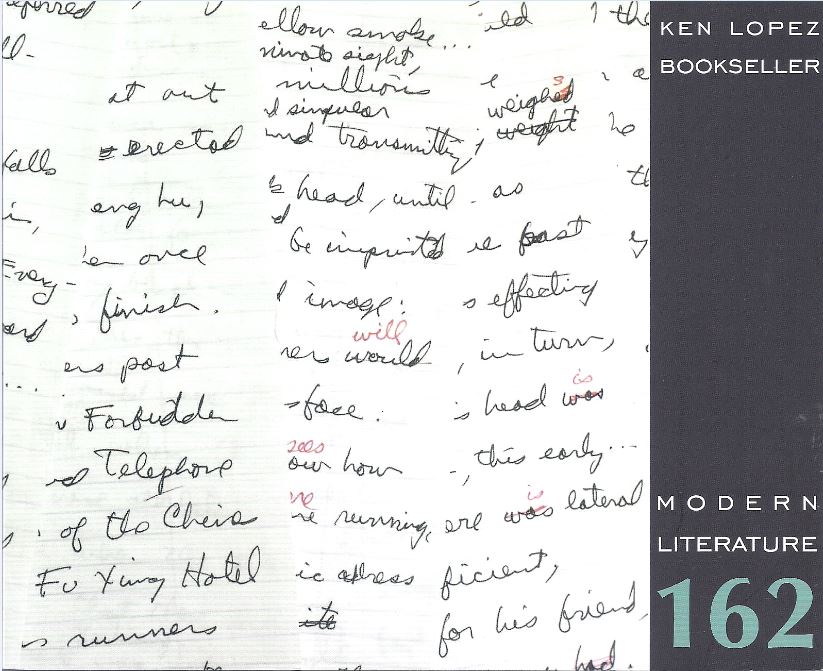 Ken Lopez Bookseller of Hadley, Massachusetts, has issued Catalog 162. Their specialty is modern literary first editions. That is not an exclusive. This catalogue contains many related items, such as letters and manuscripts from the authors who produced modern literature. There are also a few items not literature at all, such as a government report pertaining to Indian resettlement. An occasional surprise adds an element of suspense, though it is collectors of modern literature and its authors who will most enjoy this catalogue. Here, now, are a few samples from its pages.

Many thought of Hunter Thompson as weird, an appellation he was not afraid to use. However, his style became better known as “gonzo journalism.” Item 201 is Thompson's Songs of the Doomed. Gonzo Papers Vol. 3, published in 1990. That is when it was published, though not when it was written. Rather, it is a collection of essays, newspaper articles, and other hard-to-find Thompson items, some dating back to the 60's, but more from the then more recent 80's. Thompson has inscribed this copy, “To Jeannette – thanx for the grapefruit. - the fat is in the fire. Good luck. HST/Hunter.” The inscription is dated Aug. 17, 1992 from Owl Farm, his home in the Colorado mountains near the tiny hamlet of Woody Creek. It was his “fortified bunker,” his home from the early days of writing until he died. As to what this inscription means, who knows, other than Jeanette? Priced at $750.

This would have to be rather early for “modern” literature, but it is a most interesting association copy. Item 72 is James Joyce's Verbannte, which is the German edition of Exiles, published in 1919. Though he had already earned a literary reputation by then, in the days before Ulysses he was chronically short of money. His situation was such that he needed to be bailed out, and fortunately, some admirers did just that. Scofield Thayer, co-owner of the literary journal The Dial, sent Joyce $700. His partner, J. S. Watson, added another $300. It enabled Joyce to settle a court case against him and move forward with his endeavors. This copy is inscribed “To J . R. [sic] Watson, Jun / with grateful regards / James Joyce.” $10,000.

Item 1 is the first American edition of the first work from Nigerian writer Chinua Achebe. Things Fall Apart, published in 1959, is seen as the first major work of post-colonial African literature. Achebe writes of his own society, that of the Ibo tribe, and the effect of colonialism on its people. The English, not understanding the society's culture, impose their own rules and values, and along the way, that of the Ibo is changed, much irretrievably lost. This copy is signed by Achebe. $3,500.

Item 55 is a book, Lopez notes, “some consider the best baseball novel ever.” It is Bang the Drum Slowly, the second of a series of four baseball novels by Mark Harris. It is a look at a gritty New York baseball team, as seen through the eyes of one of its pitchers. It was adapted for television with a young Paul Newman in the lead role, and later as a film with Robert Di Niro as the catcher. This book was published in 1956, and the copy has been signed by Harris. $1,500.