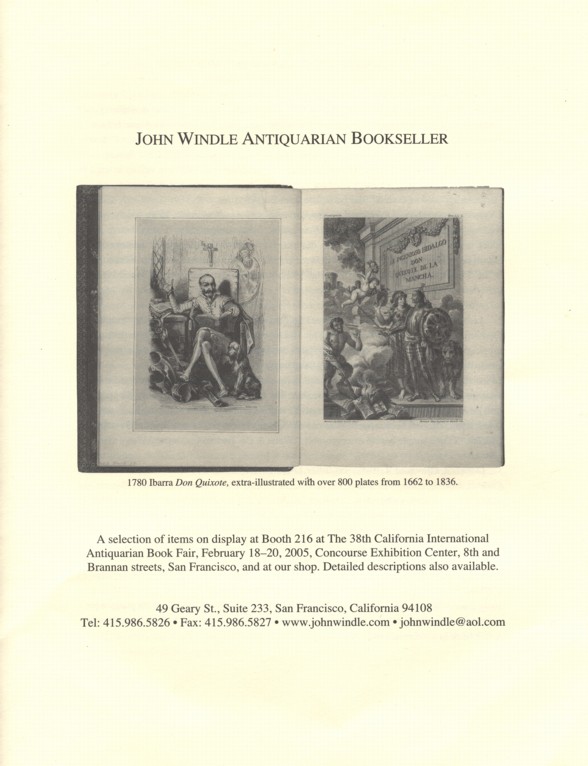 John Windle Antiquarian Bookseller has issued a catalogue in conjunction with the California International Antiquarian Book Fair held this past month. Windle offers a wide variety of material, ranging from very early European books to 19th century Americana. While the type of material varies, the common thread is that Windle specializes in fine and important material. Here are a few of the items being offered for sale.

Item 103 is the Stockdale London printing of George Washington's famous A Circular Letter from George Washington...to His Excellency William Greene, Esq., Governor of the State of Rhode Island. Written from his headquarters in Newburgh, New York, in 1783, Washington resigns his position as Commander of the Continental Army. Washington expresses his desire to retire from public life, while promoting a strong union and strong military. He notes the great opportunities now open to the new nation, but also understands it is at a major crossroads from which that opportunity will be lost if the nation does not act wisely. Priced at $2,250.

Only a few years later, France would undergo its revolution, and despite an auspicious start, that revolution would soon breakdown into anarchy and bloodshed. In the early days, hope was strong. Item 37 is a 1791 printing of the new French Constitution, La Constitution Francaise...Presentee au Roi le 3 septembre 1791....This constitution, which established a constitutional monarchy, gave legislative power to a new constituent assembly, but retained veto power in the king. This constitution would last only a year, effectively overturned by the insurrection of August 10, 1792, which would throw Louis XVI from power and start the deadly chaos which would soon overtake the country. $3,750.

In better days, Hugh Latimer preached The fyrste sermon of Mayster Hughe Latimer, whiche he preached before the Kinges Maiestie in 1549. Ordained a Catholic priest while a young man, Latimer became a devoted follower of the Reformation. This put him in good stead when Henry VIII removed the Catholic Church from authority in England and replaced it with his own church. The King, of course, was motivated more by a desire to dump his wife than promulgate new religious doctrines. In fact, Latimer's views may have been a bit too reformist, and he soon found himself in and out of prison and living on the fringes of the court through the remainder of Henry's reign. When Henry died, and Edward VI, the boy king, took over, Latimer became an immensely popular preacher. Edward, or perhaps his handlers, were strong supporters of the Reformation. This sermon, preached in 1549 before the 12-year-old king, came during Latimer's zenith. Unfortunately for Latimer, Edward would die at the age of 15, to be replaced by his half sister Mary Tudor, or "Bloody Mary." Queen Mary was a fanatical supporter of the Catholic Church, and her plan to restore the Church's authority included doing away with those who supported Protestantism. In 1553, Latimer was arrested on charges of treason, and in 1555, he and fellow preacher Nicholas Ridley were burned at the stake. It was all for naught. Mary died childless in 1558, and her half sister Elizabeth would return the thrown, once and for all, to the Anglican Church. Item 59. $9,750.