Sections from Diderot's Encyclopédie from Sotheran's 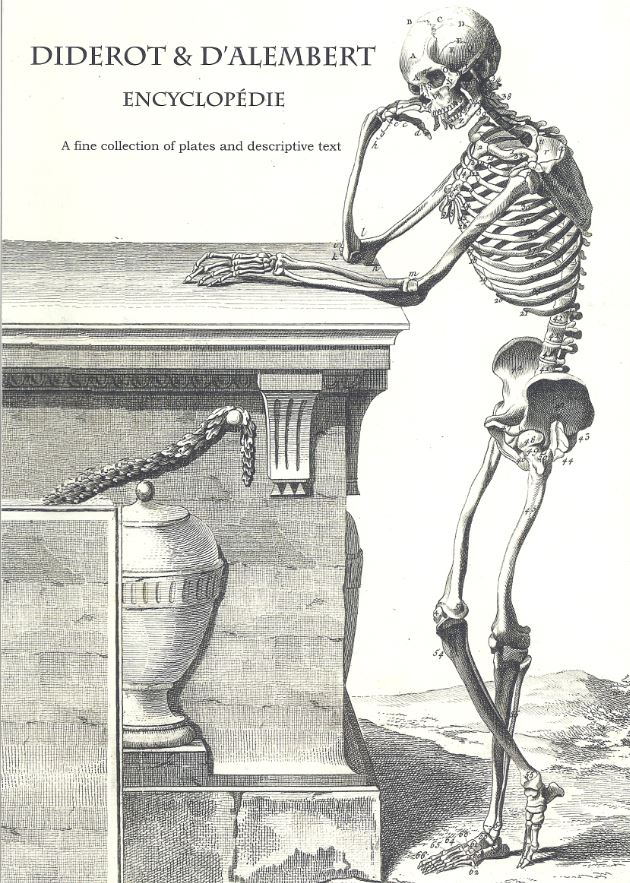 Sections from Diderot's Encyclopédie from Sotheran's

“The goal of an Encyclopédie is to assemble all the knowledge scattered on the surface of the earth, to demonstrate the general system to the people with whom we live, & to transmit it to the people who will come after us, so that the works of centuries past is not useless to the centuries which follow, that our descendants, by becoming more learned, may become more virtuous and happier, & that we do not die without having merited being part of the human race.”

Lofty goals. Actually, the Encyclopédie of Denis Diderot (and for part of its run co-edited by Jean d'Alembert) accomplished much more. While no one could quite assemble all of the knowledge in the world, the Encyclopédie contained 28 volumes with 71,818 articles and 3,129 illustrations. This does not include the later supplement, just the main volumes completed from 1751-1772. Among the achievements of Diderot was interviewing all sorts of businesses and manufacturing facilities to understand how they were run. Still, when we say the Encyclopédie achieved even more than its lofty goal, we refer to its roll in the Enlightenment in France, which would soon enough lead to a Revolution toward a more democratic and fair society (unfortunately, things did not turn out quite so well until a long time after the Revolution came). It changed the way people thought about their institutions, knowledge bringing light. The writers guided their readers toward higher ideals, and this may be the most important achievement of this massive document.

A complete set of the Encyclopédie is likely out of reach of most readers, running into six figures in American dollars. However, Sotheran's has obtained an incomplete set, deaccessioned from a library as a duplicate, which they are offering in sections. The sections include illustrations and text, which are suitable for framing for those who wish to display a portion of this influential work. They have issued a catalogue – Diderot & D'Alembert Encyclopédie. A fine collection of plates and descriptive text. It offers 175 sections from this set. You can choose those that are of particular interest for your own collection or for display at a far more modest cost than the entire set. Here are a few samples of sections that are available.

Item 1. Hatching chickens. Detailed information about incubators and hatching eggs, including a description of methods and equipment used by early Egyptians. Includes three plates of diagrams along with the text. Priced at £298 (British pounds, or roughly $488 U.S. dollars).

Item 10. Anatomy. There are 33 plates along with text on the human anatomy. Plates display many body parts, covering circulatory, digestive, muscular, nervous, reproductive, respiratory, and skeletal systems. There are also detailed diagrams of the vocal cords, ears, and brain. Sotheran's notes, “the suite serves as a useful and fascinating insight into the eighteenth-century understanding of the human anatomy.” £2,750 (US $4,505).

Item 29. Bakery. This section describes the art of the baker and the utensils and ovens used. One plate is provided which shows bakers at work plus separate images of ovens and utensils. The main article was written by Diderot but there are also separate articles, including one on ovens by an Italian nobleman. £98 (US $160).