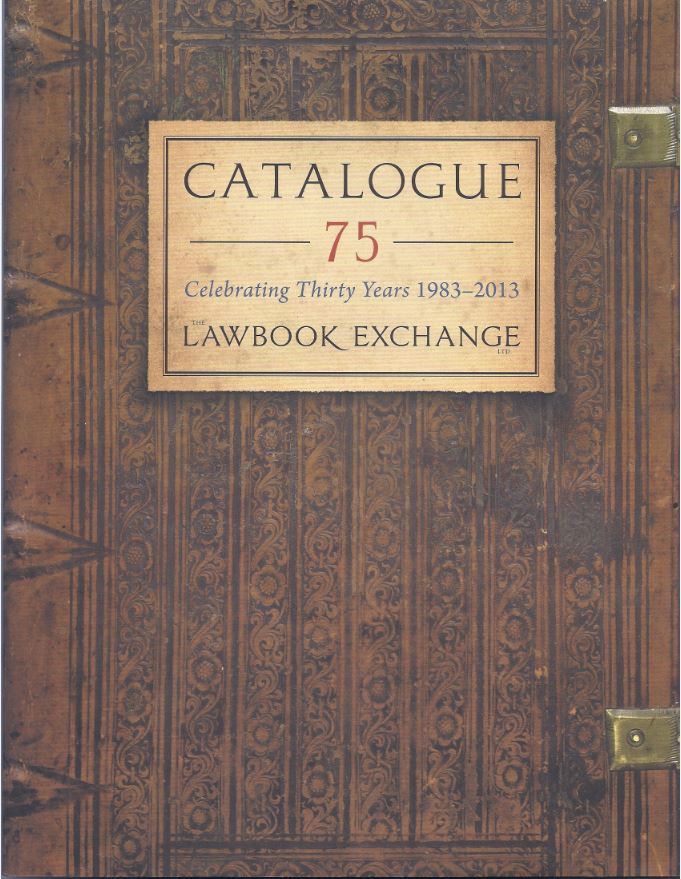 The Lawbook Exchange has published Catalogue 75. Celebrating Thirty Years 1983-2013. We will guess the fact the catalogue contains 30 items is not mere coincidence. This is not a typical Lawbook Exchange catalogue with many niche legal treatises mixed with sensational cases in publications meant for the common man. These 30 are a mix of books, artworks, manuscripts, and ephemera, with many very early legal tracts, printed as early as the beginning of the 16th century, but often dating back to much earlier manuscript versions. These early works were generally written in Latin, and that not being a language understood by this writer, we will focus on some of the books and ephemera written in living languages for this review. Here are some samples.

The greatest legal document in English history, the one that first established rights of the King's subjects, can only be the Magna Carta. Of course, there were no printing presses around in 1215 to whip off copies of this important document. It would be almost 250 more years before such was even possible. In reality, it would be even longer, into the 16th century, before Richard Pynson first printed a copy around 1508. Item 19 is another 16th century edition of the Magna Carta, the first to be published by Richard Tottell. Tottell had been apprenticed to a legal publisher around 1540, and went into business on his own a decade later. Tottell a few years later obtained a seven-year license to be the official printer of the common law, which was later renewed for another seven years, and then for life. After he died in 1593, the printing of such legal documents was opened to everyone. Tottell's Magna Carta also includes several other statutes adopted at various times in England. Priced at $6,500.

Before even the Magna Carta, there were laws, and soon enough someone would have to come up with a legal textbook. The first was written anonymously but attributed to Ranulf de Glanville. Glanville was a close advisor to Henry II and he played an important role in developing England's legal system. His work, which focuses more on procedures than case law, was completed around 1189. It was finally printed almost four centuries later, circa 1554, also by Richard Tottell. Item 11 is a copy of this first edition of Tractatus de legibus et consuetudinibus regni Angliae, Tempore Regis Henrici Secundi Compositus... $15,000.

Item 17 is another Tottell work published during his official license period, in 1583. It is Les Tenures du Monsieur Littleton, Sir Thomas Littleton's Tenures, in an edition edited by William West. This work, first published in 1481, is described by The Lawbook Exchange as “probably the most revered treatise in the history of the common law.” Coke went a bit further saying it is “the Ornament of the Common Law, and the most perfect and absolute work that was ever written in any humane science.” Much of it focuses on tenures and other issues relating to real property, and it is noted for renouncing the principles of Roman law and updating them with the common law. $12,500.

Here is a work of great importance to America's most fundamental governing document: Commentaries on the Constitution of the United States; with a Preliminary Review of the Constitutional History of the Colonies and States, Before the Adoption of the Constitution. The three-volume set was produced by Joseph Story, who served as a Justice on the U. S. Supreme Court for 34 years. The first two volumes are the “preliminary review,” covering first the colonies and their charters, and then the Continental Congress and the Articles of Confederation. The third volume provides his detailed, line-by-line commentaries on the Constitution. The Lawbook Exchange describes Justice Story's Commentaries as “the most substantial and influential work written on the American Constitution before the Civil War.” Item 25 is a first edition, published in 1833. $12,500.

Spain's monarchs may have been referred to as “His Most Catholic Majesty,” but that doesn't mean there was no competition between Crown and Church for power in Spain's extensive American colonies. Item 10 is De Regio Patronatu... two volumes from 1677-1679. It was written by Peruvian jurist Pedro Frasso. Frasso provides a legal analysis that takes the side of the Crown. $5,000.