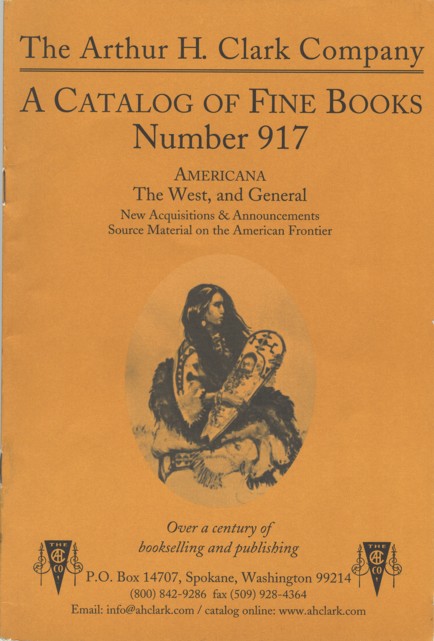 The latest catalogue from one of America's oldest booksellers, The Arthur H. Clark Company, of Spokane, Washington, has just arrived. It is focused on Americana, the West in particular, with a few other subjects thrown in. Many of the books recount travels and expeditions into the old west, as well as pioneering life and descriptions of the native Indians. There is much here for both readers and collectors among these 325 listings.

O.O. Howard is not exactly a household name, but he served his nation in many roles during the second half of the 19th century. General Oliver Otis Howard was a mathematics instructor at (and graduate of) West Point when the Civil War broke out. He would serve in various commands during that war, but was not notably successful. His 11th Corps was routed by the Confederates at Chancellorsville. He did not fare well at Bull Run either. Howard would lose his right arm at Fair Oaks, but would be back for many more battles, including Gettysburg. He was much more successful leading the Army of Tennessee during Sherman's March to the Sea.

After the war, Howard was placed in charge of the Freedmen's Bureau. This was a government agency placed in charge of educating the former slaves. Despite much opposition from those who wished to keep the freed Blacks as second-class citizens, Howard, a man of strong moral principles, fought hard for their education. One lasting monument to his work is Howard University, named after him, in Washington, D.C. In the 1890s, he would be back again promoting education, this time as a founder of Lincoln Memorial University in Tennessee. That university retains correspondence between Howard and President Theodore Roosevelt, the two working together to raise funds for Lincoln U. Along the way, Howard would also serve as Superintendent of West Point.

There was one other period in Howard's career, between his years at the Freedmen's Bureau and West Point. In 1872, President Grant would send Howard to the West to reach a peace accord with the Apache. This mission was successful, as well as the settling of other Indian disputes in Arizona and New Mexico. An attempt to reach peace with the Nez Perce was not as successful, and the late 1870s would find him engaged in the Nez Perce War. However, Howard sympathized with Chief Joseph and the Nez Perce and would try (unsuccessfully) to preserve their homelands. In 1908, the year before he died, Howard published Famous Indian Chiefs I Have Known. He knew many of the great chiefs of the West: Cochise, Geronimo, Chief Joseph, Red Cloud, Sitting Bull, Washakie, and Winnemucca. Here is his story, and some of theirs. Item 176. Priced at $140.