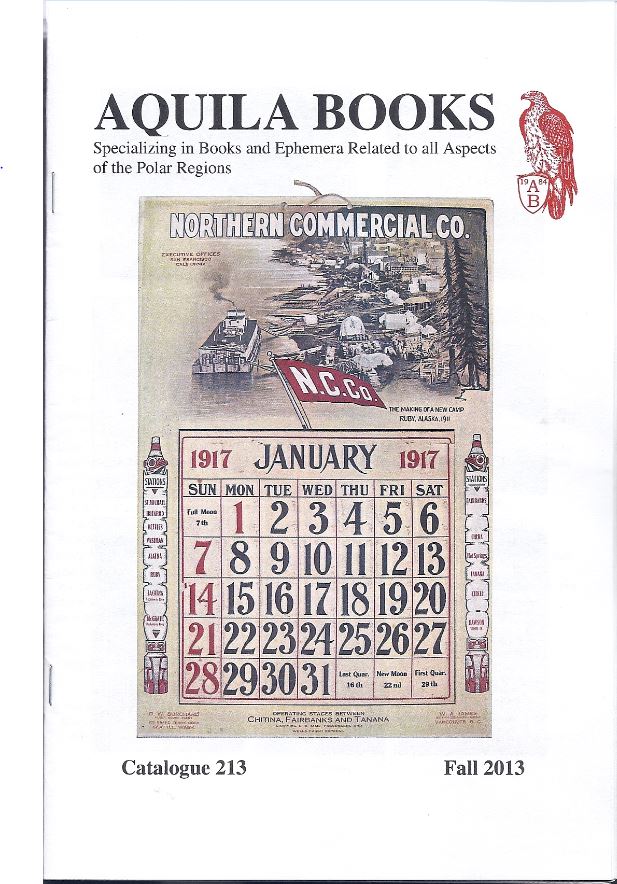 Aquila Books has published Catalogue 213. Aquila specializes in books relating to the polar regions, north and south, including adjacent areas such as northern Canada, Siberia, and Alaska. Long sought but never truly found expeditions to find a Northwest or Northeast Passage make regular appearances in these pages. So do attempts, eventually successful, to reach the North and South Poles. Klondike Gold Rush material can regularly be found, along with some of the many journeys in attempt to find the missing Franklin expedition in the Canadian Arctic at the middle of the 19th century. These are a few of the items from places where the sun shines constantly, if weakly, or not at all, to be found in this latest Aquila catalogue.

Norwegian explorer Roald Amundsen compiled the greatest number of “firsts” of any polar explorer. His 1903-1906 expedition finally traversed the Northwest Passage, an elusive route sought for centuries at enormous costs in money and life. Unfortunately, the passage has never been deep enough or the season sufficiently long for it to be of much commercial use, though perhaps global warming will change that. In 1911, he followed that up by being the first person to attain the South Pole. Then, in 1926, Amundsen took part in the first crossing of the polar ice cap in an airship, designed and piloted by Italian Umberto Nobile. In the process, they crossed over the North Pole. There are doubts and questions about the three previous claimed visits, by land and air, to the North Pole, meaning it is possible that Amundsen was the first to reach that pole as well, as this is the first such visit fully verified. Item 10 is Amundsen and Lincoln Ellsworth's First Crossing of the Polar Sea, published in 1927. This copy was signed by Umberto Nobile in 1966. Priced at $450.

The image above from the catalogue's cover is that of a 1917 calendar produced by the Northern Commercial Company. It evolved from the old Russian-American Company from the time Russia owned Alaska. By 1917, it became the major retailer in rural communities around Alaska and the Yukon. Indeed, it may have been the only significant merchant in many of these communities. The NCC also operated steamships in Alaska at this time. That explains the steamship depicted on the calendar, while the totem poles list various communities served by the company. In 1922, the company was sold and changed part of its focus, and various transfers since have further changed the business, though it forms part of the history of the current Alaska Commercial Company that still operates stores in rural Alaska today. Item 5. $750. Calendars from 1911 and 1918 are also available.

Item 23 is Reisebestrivelse Til Ostre-Gronlands Opdagelse Foretaget I Aarene 1786 Og 87. That's Danish, and it translates to being an account of travels and discoveries in Greenland in 1786 and 1787. It was written by Christian Egede, and it reports on a Danish expedition to eastern Greenland in 1786 in an attempt to find a lost Norse colony believed to still exist there. Unfortunately, the ice pack was too thick for them to land despite repeated attempts, and no sign of a Norse colony was ever spotted. Nevertheless, the book provides an interesting account of an attempt to rediscover a long lost colony of their countrymen, even if such did not exist. $4,250.