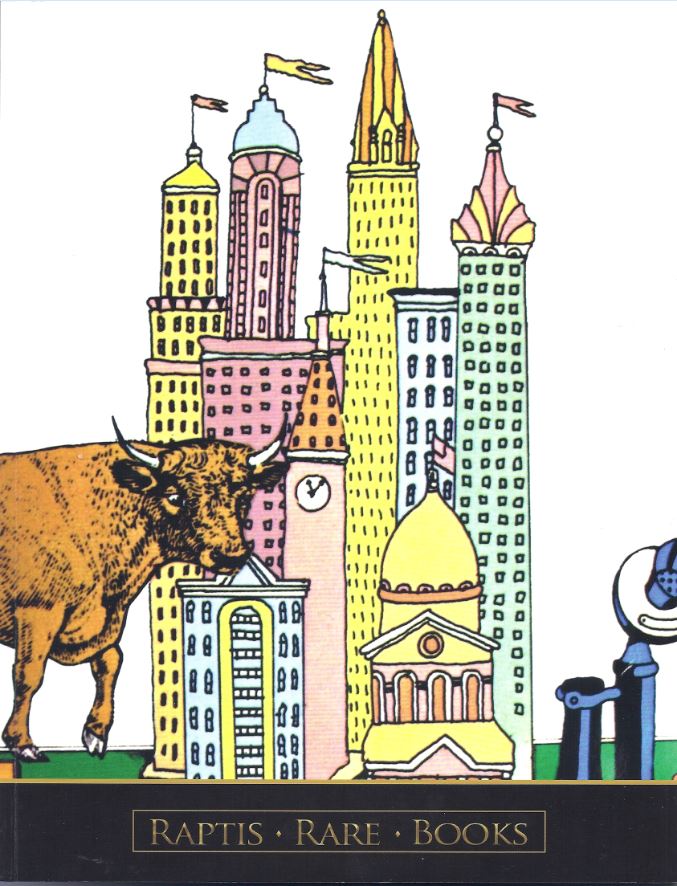 Raptis Rare Books of Brattleboro, Vermont, recently released their fifth catalogue. Raptis does not title their catalogues, but they do provide a table of contents to describe the types of material offered. Here they are: Literature, Science Fiction and Mystery, Nonfiction, Food and Wine, Travel and Exploration, Economics and Politics, History and Geography, Science and Natural History, and Children's Books. With a variety like that, I can see why it would be hard to pick a title. Here are a few samples of this variety offered in Raptis' latest selection.

Ernest Hemingway once said about this book, “All modern literature comes from one book by Mark Twain. It's the best book we've had. All American writing comes from that. There was nothing before. There has been nothing since.” He was speaking about Huckleberry Finn, and while the statement may be a bit of an exaggeration, its spirit is certainly right. Offered is a first American edition of this always popular classic, a favorite since the moment it was published. When first released, the publisher announced a run of 20,000 copies in cloth, 2,500 in sheep, and 500 in leather. This is one of the copies in leather. Published in 1885. Priced at $16,000.

Here is another Twain book, not quite as classic as Finn, but with an inscription from the author, who frequently added his famous wit to his inscriptions. The book is The Man That Corrupted Hadleyburg, published in 1902. Twain has written in hand, “Latest effort: He laughs best who laughs least.” Clever, though of course Twain really didn't have to worry about his readers laughing least. $2,950.

Perhaps no one has gone through quite the evolution in American consciousness as this man, from fantastic hero, to tragic hero, to scorned. As to where he stands today, 40 years after his death, perhaps ambivalent is the best answer. Charles Lindbergh was a great American hero when he made the first transatlantic flight in his plane the Spirit of St. Louis. Huge crowds came out to welcome his accomplishment. In the 1930s, Lindbergh became a tragic figure when his young son was kidnapped and murdered. However, Lindbergh would evolve from admiration and sympathy to scorn with his sympathetic attitude toward the Nazi regime in Germany in the late 1930s and early 1940s. His views had many American supporters before Pearl Harbor among the isolationists, but few any more after America entered the war. His reputation would never be the same, despite his great accomplishment years earlier. The Spirit of St. Louis is also the title of Lindbergh's 1954 autobiographical account of his daring flight, which won the Pulitzer Prize in 1954. It represented Lindbergh at his best. This copy is inscribed by the author. $1,500.

Few people have had as much impact on economic life as John Maynard Keynes. Keynes believed that government had a role to play in easing the recessions that regularly appear in capitalist economies, the downside of boom and bust cycles. That ran contrary to the prevailing notion that free market forces would adequately take care of these down times. The Great Depression, which was so much worse than the typical recession, spurred the adoption of Keynesian economics by many governments, including that of Franklin Roosevelt. Keynes believed that government spending was necessary during recessions, even if it required borrowing, as this was needed to increase employment and start the economy functioning properly again. His economic theories remain today at the heart of the liberal-conservative economic debate. However, economics was not all that Keynes studied. He wrote A Treatise on Probability which was published in 1921. It provides a look at probability theory. $1,750.

We will conclude with a timely if sad piece. It is Long Walk to Freedom: The Autobiography of Nelson Mandela. It certainly was a long journey for Mandela, who died just a few weeks ago at the age of 95. Twenty-seven of those years were spent in prison, but he emerged conciliatory instead of embittered, to lead his nation to freedom and equality. Mandela emerges more human than the iconic leader he became in his biography, though that hardly matters. His reputation was well-earned. This copy of his 1994 autobiography is signed by Mandela. $6,500.