Franklin and Other Rare Americana from George S. MacManus 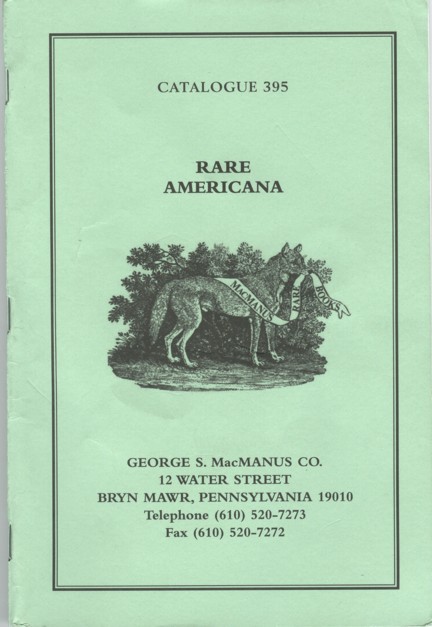 Franklin and Other Rare Americana from George S. MacManus

George S. MacManus Co. of Bryn Mawr, Pennsylvania, has issued its Catalogue 395 of "Rare Americana." It contains over 400 rare books primarily from 18th and 19th century America, few of which you will see very often. Here are some samples.

While Benjamin Franklin is the subject of only a few items in the catalogue, we thought we should give him special notice as McManus presents an interesting group of Franklin pieces. Franklin is somewhat taken for granted today, but America never produced anyone else quite like him. Patriot, statesman, politician, scientist, inventor, writer, printer....what wasn't he? He would be remembered today for each one of these roles if he had achieved nothing else.

Item 359 is the fifth and most complete edition printed during his lifetime of Franklin's Experiments and Observations on Electricity.... Included is the kite and key experiment with lightning that every schoolchild has been taught (and told not to try themselves) for two centuries. This book has been called "the most important scientific book of eighteenth century America." For Franklin, it marked a turn from his scientific experimentation, as after its 1774 printing he focused primarily on diplomacy and the political needs of his soon-to-be independent country. Priced at $4,000.

Oops. Here is yet another role Franklin filled left out of that previous list. In the middle of the 18th century, Franklin was involved in the forming of the first hospital in what was then British colonial America. The book is Some Account of the Pennsylvania Hospital, from the First Rise.... Franklin was involved in the founding of the hospital, was one of its managers until 1756, is believed to have written this book about it, and was the book's printer. Item 367. From 1754. $4,000.

Of course printing was Franklin's first career. Item 370 ties his early printing career to his developing involvement with politics. Printed in 1742-3, it is The Charters of the Province of Pennsylvania and City of Philadelphia. The previous printing of the colony's laws was a dozen years old when the legislature authorized Franklin to print an updated edition. $4,250.