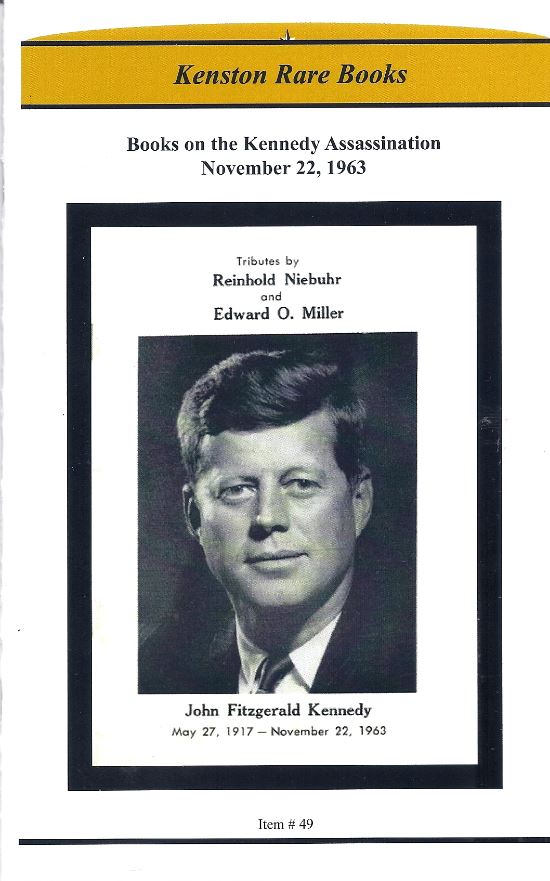 Kenston Rare Books has issued a catalogue pertaining to the terrible anniversary we just passed: Books on the Kennedy Assassination November 22, 1963. There's not much we can say that hasn't already been said about this terrible day. Anyone who was alive and of age enough to remember that day remembers exactly where they were. Gym class, in my case. We all came of age that day, but not in a good way. The world would never be quite the same, never quite as good again. Today, JFK would be 96 years old, which is to say we have reached a point where it is unlikely he would still be with us even if he had survived that day. Still, we can only imagine what might have been had he been able to finish his normal allotment of years.

Of course, like all such tragedies, the Kennedy assassination has generated an enormous number of conspiracy theories. Many of these books pertain to these, and we take no opinion on them, other than to note no one has ever come up with clearly convincing evidence that what the Warren Commission concluded happened on that day is not correct. Nevertheless, conspiracy theories made household names out of people like Mark Lane, Jim Garrison, and Oliver Stone. They, along with those clearly involved, Oswald, Ruby, and the victims, President Kennedy, Officer Tippett, and the injured Governor Connolly, all make their appearances in the works in this catalogue. Here are just a few samples.

Here is a short book that freezes time to that terrible day: The Texas Daily Press on November 22, 1963. Published by Sam Houston State Teachers College (1964?) it contains facsimiles of the front pages of 47 Texas newspapers from that day. It displays how Texas editors dealt with this awful event which happened in their state, a state where some strongly negative comments about the President had been expressed in the days leading up to the assassination. Item 31. Priced at $60.

Item 2 is a packet of material that was sent to those who had tickets to the Texas Welcome Dinner, to be held in honor of President Kennedy and Vice-President Lyndon Johnson on the evening of November 22, 1963, in Austin, Texas. It was produced by the State Democratic Executive Committee, which helped to promote the President's trip to Texas to help heal divisions within the state Democratic party. The package includes a program for the dinner, the full text of the speech he was expected to give, the text of the speech he was to give in Dallas that day, and a recording of three speeches he gave in Texas plus his inaugural address. The recording has the eerie title, His Last 24 Hours. $850.

The pamphlet shown on the cover of this catalogue comes from one of many memorials to the slain President in the days following his assassination. It came from a memorial service held on Sunday, November 24, 1963, at St. George's Episcopal Church in New York City. It features the President's photograph on the cover with the heading Tributes by Reinhold Niebuhr and Edward O. Miller. Niebuhr was one of the leading theologians of the twentieth century, while Miller was the Rector of St. George's Church. Item 49. $35.