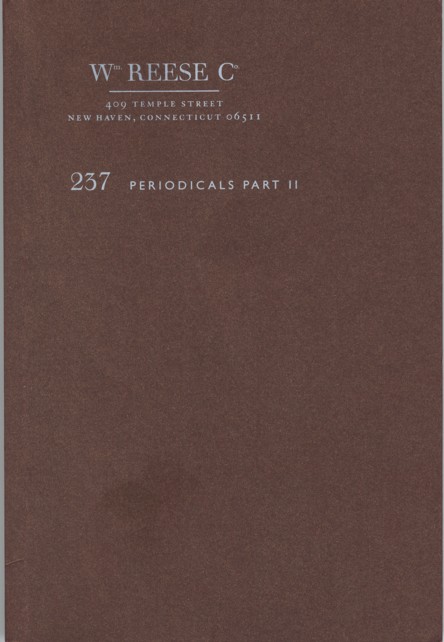 The William Reese Company has issued its 237th catalogue, this one being the second part of catalogue 228 issued in late 2003. The title is "Periodicals Part II," or "Periodicals 1890-2000," and it has little in common with any Reese catalogue besides Periodicals Part I. Reese is noted as one of the foremost sellers of the top books and manuscripts in the field of Americana. This catalogue will appeal to an entirely different group of collectors.

The periodicals offered in this catalogue (there are 871 of them) are not the ones you find on your typical newsstand, not even if you could go back in time to the newsstands of the eras in which they were published. These are primarily literary magazines. Few had large circulations, most lasted only a few months or years, some only for one issue. Unless you are very familiar with the field, you will probably never have heard of more than a handful of them. Perhaps you remember The Fat Abbot, Satyrday, The Last Cookie, Exquisite Corpse, Wurm, Tanager, Tangents, or Tangerine. I don't. No matter. They live on in Reese's catalogue. If you remember and collect them, and hundreds more like them, it is unlikely you will ever find a more complete source than the Reese catalogues. If you do not know them, but have an interest in literary journals from the past century, you will also want to see these catalogues.

While the periodicals themselves are mostly hidden in obscurity, this is not always the case with their writers or the issues they covered. The pages of many of these journals are graced with the prose and poetry of many writers who achieved the recognition these magazines failed to reach. In some cases, the writings came early in their careers, before they were known. In other cases, these obscure journals were able to draw contributions from already established writers. If you collect a particular writer or poet from the 20th century, you will want to peruse the listings in these catalogues. You just may find something he or she wrote that you have not seen before. Not to be a name dropper, but here are just a few of the contributors: Sandburg, Yeats, D.H. Lawrence, Pound, William Carlos Williams, Langston Hughes, Kerouac, Ginsberg, Joyce, Henry Miller, Cummings, McLuhan, Saroyan, Ferlinghetti, Leroi Jones, Sartre, Pasternak, Nin, Rilke, Auden, Vidal....and many more.