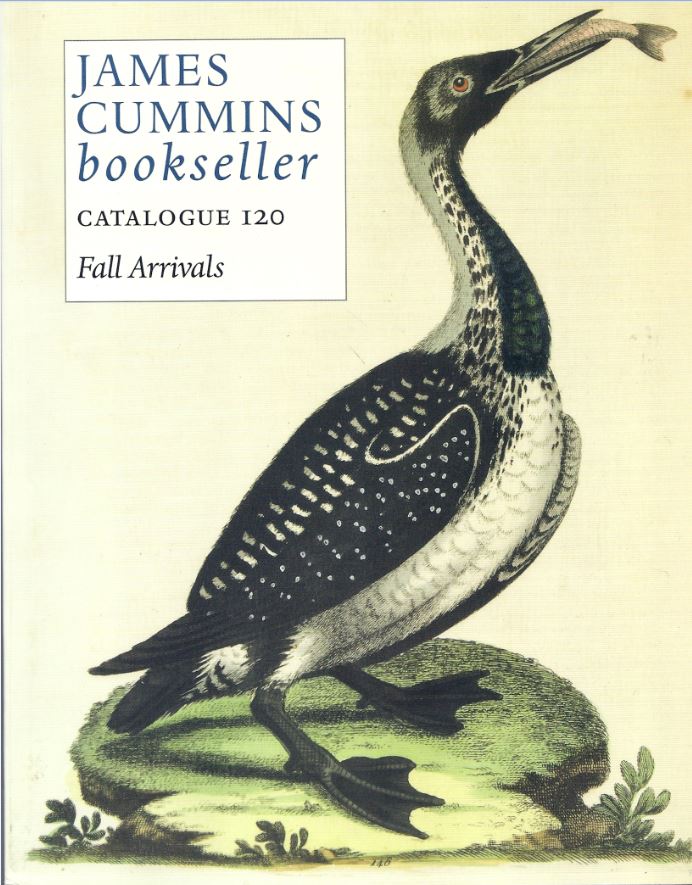 James Cummins Bookseller has issued Catalogue 120 Fall Arrivals. Each time we receive a new catalogue from Cummins, we struggle to come up with a description of the material inside. It is always virtually impossible. Cummins offers a wide variety of items, so much so that trying to sum up what it contains is hopeless. Ultimately, we are left with explaining this is all top material, important, highly collectible pieces. Next, we present a few samples, knowing there is much to be found that is totally unrelated to the samples we select. So, here we go.

We begin with what is likely the first separately issued pocket map of New York's Central Park. Central Park first opened in 1857. In 1859, P. Burger & Co. issued A Pocket Map and Visitor's Guide to the Central Park, in the City of New York, with all the necessary explanations. It includes a fold-out map, text describing the park, and 15 pages of advertising. Park commissioners and construction officers are listed, including the park's designers, Frederick Law Olmstead and Robert Vaux. The map shows areas that are completed and those that are not, it being almost a decade and a half before all work would be done. The description notes that areas now completed include “...the old and new reservoirs, play ground, parade ground, promenade, arsenal, nursery, botanical garden, skating pond, cave, walks, carriage drives, bridle roads, vista rock, and last, though not least, that at present most beautiful and delightful portion called 'The Ramble.'” Item 12. Priced at $5,000.

Item 36 is an interesting survival from over five centuries ago. It is an original woodblock of an elephant with a riding platform on its back. It was created for an illustration in the book Libellus de Natura Animalium, first published in 1508. It was the first book printed by Vincenzo Berruerio of Mondovi, Italy. This book was a bestiary, and evidently a very popular one as it went through several editions. It uses animals to set out moral lessons to be learned from nature. The image is is still in excellent condition in case you would like to use it in a newer book. $9,000.

This next document represented a happy day in the life of its recipient, though in time it would prove to be his greatest tragedy. Item 61 is an engraved broadside appointment of Robert S. McNamara as Secretary of Defense. It is dated January 21, 1961, and is signed by President John F. Kennedy and Secretary of State Dean Rusk. McNamara came to the Department of Defense from Ford Motor Company, where he had served as President. He had a sterling reputation and was well regarded during the years of the Kennedy Administration. After Kennedy's assassination, McNamara continued to serve under President Lyndon Johnson, and that is where everything went wrong. He engineered the massive buildup of troops in Vietnam, McNamara being a leading symbol of a war that would later turn terribly unpopular. In time, McNamara became disenchanted and tried to hold back American involvement, but Johnson pushed ahead. McNamara resigned in late 1967, about a year before the end of Johnson's term. In later years he would look back with regret at what proved to be a failed and costly strategy. McNamara died in 2009 at the age of 93. $35,000.

There are but a handful of books that count among the most important science texts ever written. They come from names like Kepler, Galileo, Darwin and Einstein. And then there is this one: Philosophiae naturalis Principia mathematica, by Isaac Newton. Galileo had provided the calculations that could predict how the planets and other heavenly bodies would move, but Newton was the one who provided the why. With theories such as that of gravity he could explain why objects moved as they did on earth and in the skies. Offered is the expanded second edition of 1713, the second of three published during Newton's lifetime. Item 68. $27,500.