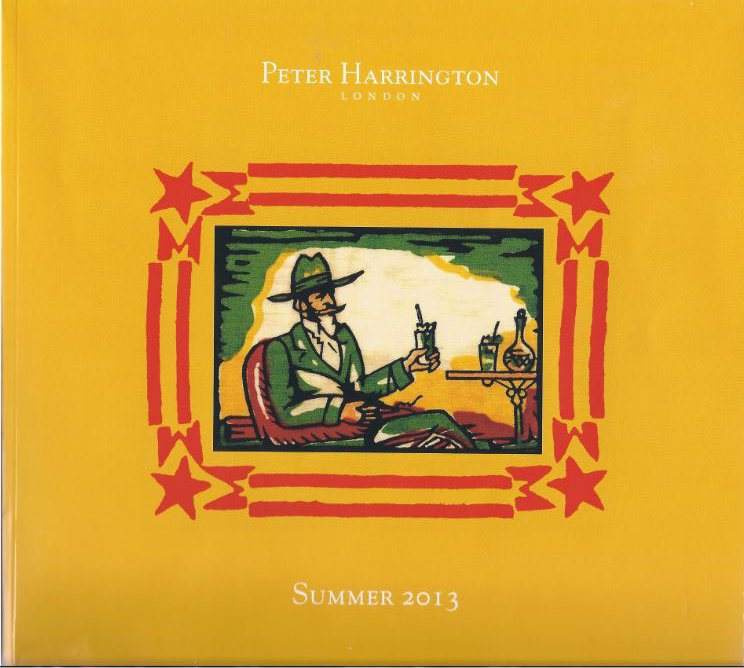 Peter Harrington has issued a catalogue for Summer 2013. It doesn't say it's a miscellany, but it is. A little of everything can be found, from literature, art, history, mystery, travel, economics, politics, religion, sport, science (real and fictional), children's books, and undoubtedly many more topics that have slipped my mind. Over 300 items are offered, and these are significant works, worthy of the detailed presentations they are given. Here are a few of the works that have made their way into the London bookseller's latest catalogue.

We will start with perhaps the most important of Egyptian archeological discoveries: The Tomb of Tut-Ankh-Amen Discovered by the Late Earl of Carnarvon and Howard Carter. King Tut may not have been the most important of Egyptian pharaohs, but his was the tomb that had survived the millennia untouched, free from the grave robbers that disrupted the graves of other ancient kings. Howard Carter, with the financial backing of Lord Carnarvon, had done much searching in Egypt when he came upon “Tut's” unspoiled resting place. His account, written with his assistant, A. C. Mace, was published in three volumes, 1923, 1927, and 1933. Item 43 includes first editions, first impressions of all three of these important archeological studies. Priced at £2,850 (British pounds, or approximately $4,436 in U.S. dollars).

Item 64 is a 1941 memo in the form of a flyer issued by British Prime Minister Winston Churchill in 1941, which certainly must have elicited its share of nervousness. It is his “stand firm and carry on” memo, though its heading is Beating the Invader. It provided instructions to the British public on what to do if the country was invaded on land by German troops. Fortunately for the British public, they never had to deal with a physical invasion, though bombs rained down from the sky. The “stand firm” part was directed at areas where troops entered the neighborhood. Churchill warned that it would be too late to flee, so people should stay inside and protect themselves or employ other means of self-preservation until British troops could deal with the invaders. The “carry on” part meant that in areas where the invader was not present, the British people should carry on with their work and their lives without disruption. One would not expect this item to be rare as 14 million copies were printed, but it was an ephemeral piece and few copies appear to have survived. £750 (US $1,167).

Peter Rabbit was a naughty little bunny, but apparently not bad enough for author Beatrice Potter's niece. She wanted her aunt to write a story about an even naughtier one. Potter could have written Watership Down in response, but instead she wrote this book: The Story of a Fierce Bad Rabbit. Published in 1906, booksellers were reluctant to handle it, but not because the protagonist was too evil. The book was printed in a long fold-out format, which they feared would be difficult for small children to handle. A decade later it was reprinted in standard form, but item 231 is a first edition, first issue. £2,000 (US $3,113).

Item 182 is an inscribed copy of Satori in Paris, by the wandering beat generation writer Jack Kerouac. It was published in 1966, the year Kerouac married his third wife, Stella Sampas. The marriage could only last for three years, as the alcohol consumed Kerouac died in 1969. However, even that was an accomplishment as neither of Kerouac's previous marriages lasted even a year. This copy was inscribed to Tony Sampas, Stella's brother, “Tony's copy – signed by his brother man Jacky Kerouac.” £8,500 (US $13,240).