Twain, Tarzan, and Everything Else from The Heritage Book Shop 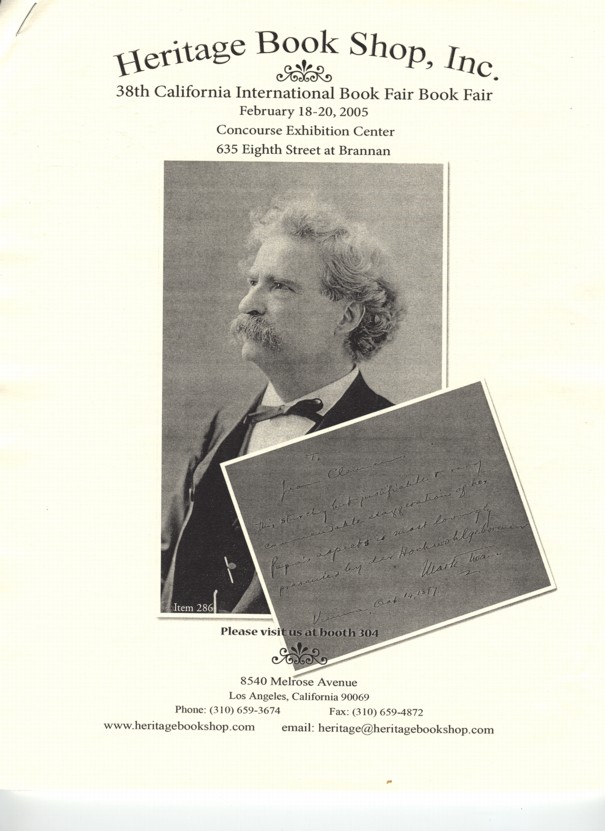 Twain, Tarzan, and Everything Else from The Heritage Book Shop

The Heritage Book Shop of Los Angeles published a catalogue for the recent California International Book Fair in San Francisco. Book Fair catalogues tend to differ from most others in that they are generally not themed. Instead, they represent what the bookseller thinks will most appeal to a wide spectrum of collectors. This is definitely true of the Heritage catalogue. It offers everything from a 15th century illuminated manuscript to 20th century mysteries. Along the way, it seems to touch on just about everything in between. Here are a few samples.

Edgar Allan Poe's first book of short stories is one of the more important pieces of American literature. Tales of the Grotesque and Arabesque was originally published in 1840 in an edition of just 750 copies. The book contains "The Fall of the House of Usher" and many more Poe tales. Poe's brief life would come to an end before the decade was over, but this was probably one of the brighter periods in his troubled life. This two-volume set is priced at $35,000. Item 213.

Is there any more famous piece of music than Beethoven's Fifth Symphony? Don't answer. That's a rhetorical question. Item 14 is an 1826 first edition of Cinquieme sinfonie en ut mineur. The Fifth did not shoot up the charts when it was first performed. However, a year and a half later, it was propelled towards its current iconic status behind a glowing review. The reviewer explains how the music destroys "all within us except the pain of endless longing...Only through this pain, which, while consuming but not destroying love, hope, and joy, tries to burst our breasts with a full-voiced general cry from all the passions, do we live on and are captivated beholders of the spirits." Wow. It sounds like this reviewer was beholding a few too many spirits, perhaps a fifth of something other than Beethoven's music. $12,500.

Last year the earth experienced a rare transit of Venus. A transit of Venus occurs when that planet crosses in front of the sun (technically speaking, crosses between the earth and the sun). It is so rare that no one alive had ever seen one before (though another will occur in 2012). You may remember it; you may not. It was no big deal. This wasn't always the case. In a more primitive world without today's scientific instruments, the transit was used as a tool to measure the size of the solar system and even the universe. Ships were sent out across the globe to observe the transit from different locations. Captain Cook is remembered for discovering such things as Australia and Hawaii, but few are aware that the primary reason for his first voyage was to observe a transit of Venus from the South Seas.