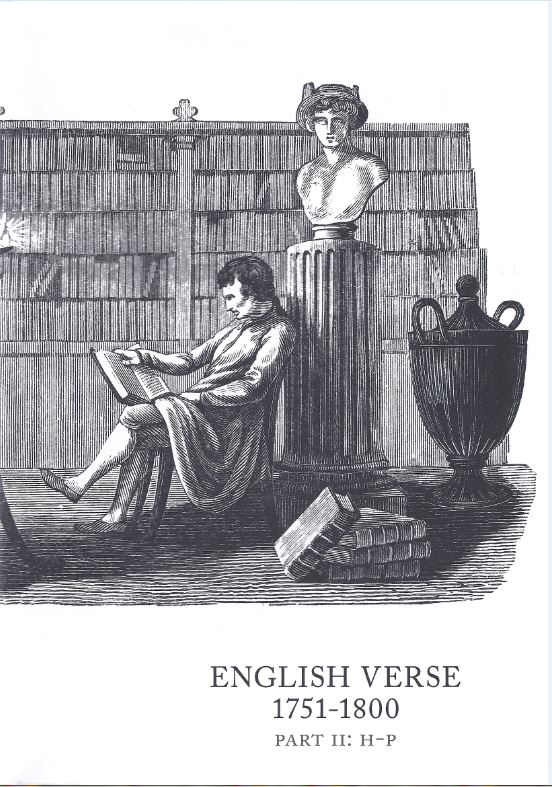 Justin Croft and Simon Beattie have issued a second catalogue of English Verse 1751-1800. Part II: H-P. Those poetical Englishmen (and women) from the second half of the 18th century are back again, and unless there are no poets whose last names begin after letter after “P,” they will return for at least one more appearance. Many put their pens to poems and plays (we like to use that letter “P”) with varying degrees of success. Most of these writers range from obscure to moderately well known. Some had great skills, others more will than talent. In many instances, contemporary reviews of the works are provided. The reviewers could be tough. They were kind where they believed the work merited praise, biting when they thought it was terrible. One positive about lesser works is they tend to be quite rare, not something that every, perhaps any, library possesses. These books came from the extensive collection of James O. Edwards and many display his bookplate.


Item 58 is a rare poem following the closing of the American Revolution by William Hurn. Hurn first began work as a tutor in classical literature, but joined the army in 1779. A year later he left and was ordained a minister. It was early during this period that he wrote The Blessings of Peace, and the Guilt of War, a lyric poem, published in 1784. Hurn looked at the horrors of war and gave thanks that it was over. However, he remained depressed that slavery continued to hold sway across the Atlantic. He wrote, “He drags with unrelenting hands / Millions from Africa's sands / Weeping, and doom'd to view no more / Their kindred dear and natal shore.” In the years ahead, Hurn became more deeply devoted to his theological beliefs, in time resigning from the organized church to preach his intense beliefs of the meaning of scripture. Priced at £1,500 (British pounds, or roughly $2,291 U.S. dollars).


Hannah More shared Hurn's abhorrence for slavery. However, she was a far more successful writer. She began as a teacher, but soon turned her attention to writing plays. In the 1780s, she became associated with numerous notable people of the time. She turned to evangelical Christianity, and with money now flowing in, she supported women's education and other philanthropic causes. However, she was no radical, not a Mary Wollstonecraft. Rather, she focused on teaching good manners and less threatening endeavors for women. She did, however, take a hard line on slavery. Item 204 is Slavery, a Poem, published in 1788. A popular writer by this time, her advocacy helped to bring an end to the slave trade. This first edition was published in London, but was quickly followed by New York and Philadelphia printings that perhaps weren't quite so effective in bringing about needed change. £300 (US $458).


Item 9 is Poems: by G.D. Harley, of the Theatre Royal, Covent Garden, published in 1796. George Davies Harley was a serviceable, reasonably popular actor of his time. The Dictionary of National Biography says, “He never rose above being a useful actor.” His poetry was perhaps of similar limitations. The Critical Review felt his descriptions were excellent, but that Harley was given to “prolixity,” using too many words. The Monthly Review was not so gentle. Noting that subscribers would never feel shortchanged in terms of quantity, it notes, “...he never fails of giving enough. Here is a poem on Night that would almost require a night's reading to get through it; and a Legacy of Love to a Child, as long as was ever bequeathed by a lawyer's pen in a real last will and testament.” Still, it credits Harley with good observation of events that have passed before him. £700 (US $1,069).


Item 193 is a group of four religious works bound together, the most notable A Modern Familiar Religious Conversation, among People of different Sentiments. This came from the pen of one Thomas Wright (there were generations of Thomas Wrights in his family – this one lived from 1736-1797 and his autobiography compiled by his grandson, Thomas Wright, refers to him as Thomas Wright of Birkenshaw). Wright was partial to the Methodists and knew John Wesley, though he never officially signed up. His Methodists sympathies may have arisen from his dislike for the local ardent Calvinists, that more likely arising from his feelings about his Calvinist in-laws than from theological differences. Wright attacked them, using his extraordinary wit. In this work on different sentiments, faced with all of the different religious choices, he notes:


“While each, and ev'ry one pretend

To be to sacred truth a friend,

They make that book their only rule,

Which Christians own infallible,

For guiding through life's dubious maze:

Yet they explain it fifty ways!

Many besides of old renown,

Not easy to be noted down,

Churches Greek, and Latin, too

With many more, both old and new,

Than you would think, or I can shew.”


While Wright eventually emerges from his perplexity sympathetic to Methodism, he would later point out that if anyone could show his beliefs incorrect, he would gladly renounce them. £950 (US $1,451).