The Law from the Lawbook Exchange 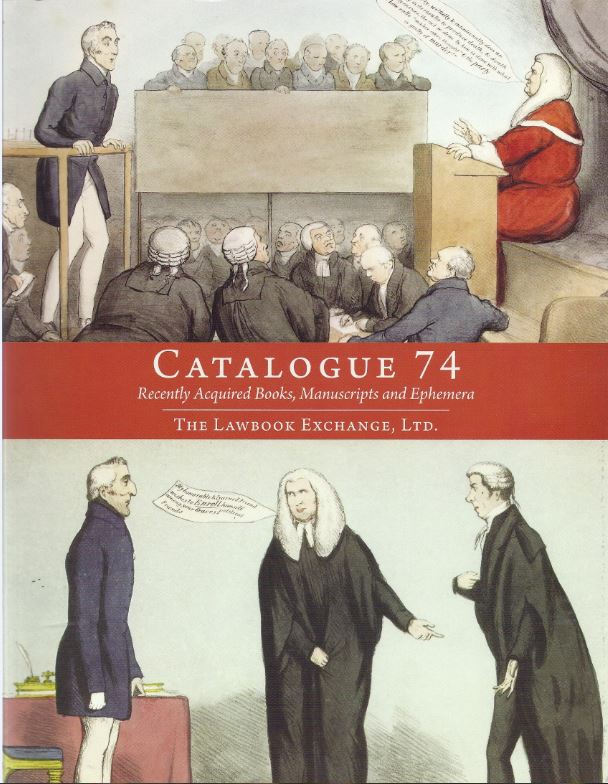 The Law from the Lawbook Exchange

The Lawbook Exchange has published their Catalogue 74. Recently Acquired Books, Manuscripts and Ephemera. As their name implies, the Lawbook Exchange offers titles connected to the law. Some are legal texts, of interest primarily to those who study the evolution of law over the centuries. Others are not so legalistic, such as accounts of notable sex and murder trials of the day. This is how regular folks learned about sensational cases before we had Nancy Grace to show us the way. Here are a few from both types being offered in this newest Lawbook catalogue.


We will start with the first serious attempt to compile English case law into an understandable description of the common law. It is De Legibus et Consuetudinibus Angliae (the laws and customs of England) by Henry de Bracton, published in 1569. Though this is a first edition, that publishing date is misleading. The work was written in the 1250s, but obviously there could be no printed edition at the time. What was new was the compilation of decided court cases, and then using them as a source of authority for the meaning of the law. Readers could understand prior decisions and the reasoning behind them to interpret the law's meaning. Item 25. Priced at $13,500.


This next text is even older than that of de Bracton. Item 56 is Tractatus de legibus et consuetudinibus regni Angliae, Tempore Regis Henrici Secundi... (treatise on the laws and customs of the Kingdom of England, during the time of Henry II), a first edition circa 1554. This also started as a manuscript, completed around 1189. The author is anonymous but believed to be Ranulf de Glanville. He was a justice who became a close advisor to King Henry II. Henry was not a beloved king, but he is credited with creating an effective legal system for England, much of the credit for which belongs to Glanville. This work was the first English treatise on the law, focusing on legal process rather than court cases as did de Brocton's work. After Henry was succeeded by his less than loving son, Glanville was thrown out of office, joined up with the Crusades and died shortly thereafter. $15,000.


Here is one of the more fascinating trademark pieces you will see: The Coca-Cola Company: Opinions, Orders, Injunctions, And Decrees Relating to Unfair Competition and Infringement of Trade-Mark. This was published by the Coca-Cola Company in 1923. Coca-Cola was not yet quite the dominant brand it is today in 1923, but neither was it a purveyor of Cocaine-laced patent medicine then either. It was a successful, rapidly growing company, determined to protect its trademarks. This book contains documents pertaining to several court decisions relating to Coca-Cola's trademark from 1886-1923, with numerous color illustrations. Item 119. $650.


Next is one of those sensational pieces, Report of the Trial and Conviction of Roman Weinzoepflein, a Roman Catholic Priest, for Rape: Committed Upon the Person of Anna Maria Schmoll, While at Confessional, in the Catholic Church at Evansville, Ind. As “Reporter” William H. Chandler informs us, “We feel it our unpleasant duty to give the public the particulars – so far as we may with decorum – of an outrage...” Undoubtedly, the public found it equally unpleasant having to read the “particulars.” So would you, so we won't repeat them. Well... maybe a few. After a few prying questions about her sex life, “the Priest came out of his box and pulled me from the bench where I was kneeling and threw me on the floor and committed rape upon me – and I fainted,” so saith Mrs. Schmoll. The first jury was unsure and could not reach a verdict, but the second trial ended in a conviction for the young, substitute priest. If you want more “particulars,” order item #122. $2,500.