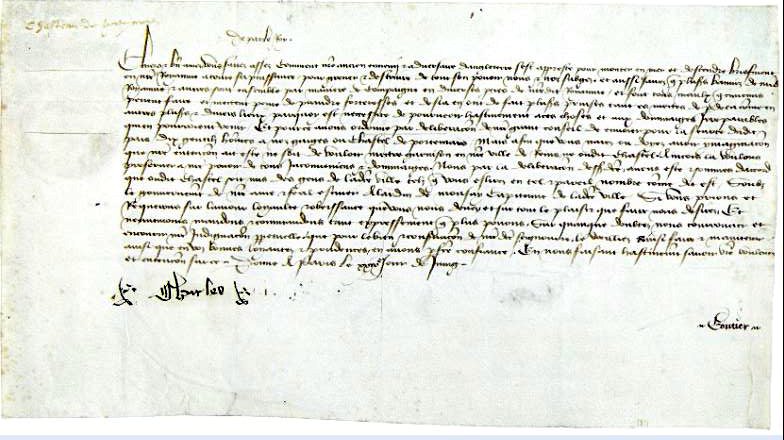 Item 8 is the 15th century manuscript, a document dated June 29, 1415, from French King Charles VI urging the citizens of Reims in northern France to defend the homeland from the threat of English attack. This was during the Hundred Years' War, a series of battles and lulls between the two as the English sought to control their neighbor to the South. At the time this document was written, the war was at the end of one of its quiet periods as Henry V of England was indeed planning an attack. Charles encouraged the citizens of northern France to resist “our ancient enemy” using all of their power. Later that year, the English would descend on France, and using a force of skilled archers overwhelm a much larger number of French fighters at the Battle of Agincourt. Henry was able to lead his troops to victory, while Charles, suffering from both physical and mental ailments, had to rely on others. England would gain control over much of France during the next decade and a half, but then the tide would turn, first through the inspiration of Joan of Arc. By the end of the Hundred Years' War in 1453, the English would be pushed out of all but a small part of France. Nevertheless, the end of this war would not stop the constant flaring up of new wars between these “ancient enemies” for almost another 500 years. $18,600.


Item 5 is an archive of material from the earliest days of the telephone. It mostly deals with the second city telephone service installed, in Washington, D.C. The material dates from 1877-1882. Alexander Graham Bell received his patent for the telephone in 1876, and the Bell Telephone Company was formed the following year. Its first system was developed in Boston, closely followed by Washington. The archive belonged to George C. Maynard, a company agent. It consists of service reports, leases, estimates, installation diagrams, and business reports. There is pricing for various wires, conductors, labor, and installation of telephones, including rental of the phones. Of particular note is a series of reports relating to Alexander Bell's personal telephone installation. This includes a diagram of his personal telephone line to Georgetown. Bell set up residence in Washington in the 1880s to defend his company against a flood of patent suits from others claiming to have precedence in inventing the telephone (Bell successfully defended them all). $15,000.