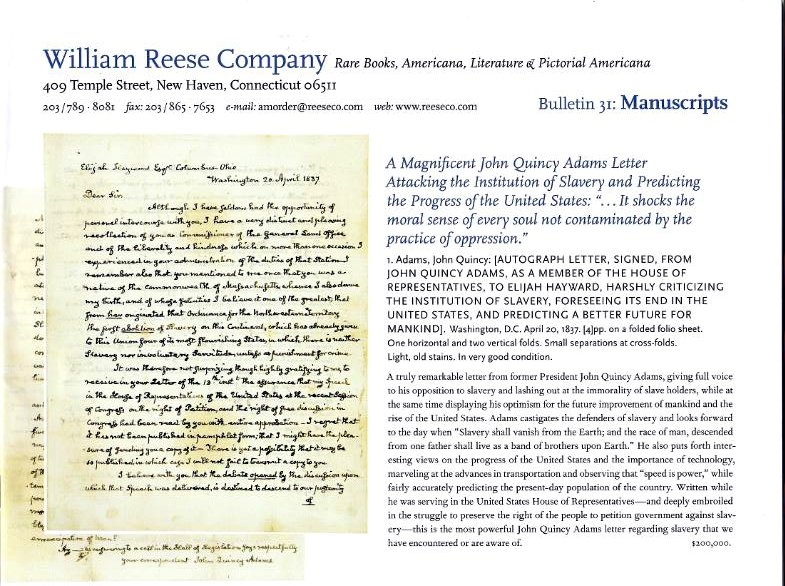 The William Reese Company has released their Bulletin 31: Manuscripts. It contains 32 handwritten documents, either from notable historic persons, or participants in important events. Most are from America or associated with important events related to America. However, since there are manuscripts going back as far as the early 15th century, we can be confident that not all are related to America. Here are a few of the antiquarian manuscripts Reese has to offer.


The Civil War had entered its last month when Confederate General Robert E. Lee received this letter from General Pierre Beauregard. The Union was closing in on the Confederates and surely these generals realized that hope was now all but lost. Sherman had already marched through Georgia and was now heading north through the Carolinas, Virginia up next. Beauregard writes that his Army is in desperate need of money. Troops have not been paid, leaving them demoralized, while funds were also needed to pay railroads and steamboats. Beauregard also relays the instructions he has given to General Richard Taylor, son of President Zachary Taylor, who once promised personally to lead Union forces if the South ever seceded. The son made a different choice, and was now trying to hold off Union troops in Alabama. On the fourth page of this signed letter (in a secretarial hand) from Beauregard is a handwritten and signed response from Lee. Lee writes that he has written the Secretary of War in hopes that he may some way be able to relieve Taylor's financial embarrassments. He also notes that he recommended that Taylor keep sufficient troops in the field to fight or otherwise they will all surely be captured. The letter reflects the gloom and desperation of the Confederates' situation, which would force an unconditional surrender less than a month after Lee's note of March 15, 1865. Item 19. Priced at $22,000.


America's early presidents were from the upper classes of society, well-off landowners for the most part. Andrew Jackson changed that with his popular frontier image, which William Henry Harrison adopted when he ran against the more prosperous successor to Jackson, President Martin Van Buren, in 1840. His campaign slogan (along with “Tippecanoe and Tyler too”) was “log cabin and hard cider.” It was supposed to depict his life as a man of the people, not an elitist like Van Buren. Of course, claims that Harrison was born in a log cabin were a great exaggeration. His father was a well-educated Virginia legislator and signer of the Declaration of Independence. As for drinking hard cider in his years in the West fighting Indians, item 17 tells a different tale. It was written on Nov. 21, 1813. Harrison had been out west fighting Indians the British had stirred up during the War of 1812. It would be his defeat of the Indians at Tippecanoe that would lead to his nickname and election as President many years later. In this letter, rather than putting in an order for hard cider, Harrison, in Sackett's Harbor, New York at the time, puts in an order for wine for the winter. Harrison makes it known that he wants a good supply before the Ohio River freezes over. Perhaps if Van Buren had this letter to debunk the hard cider claims, the course of history would have been different. $3,500.