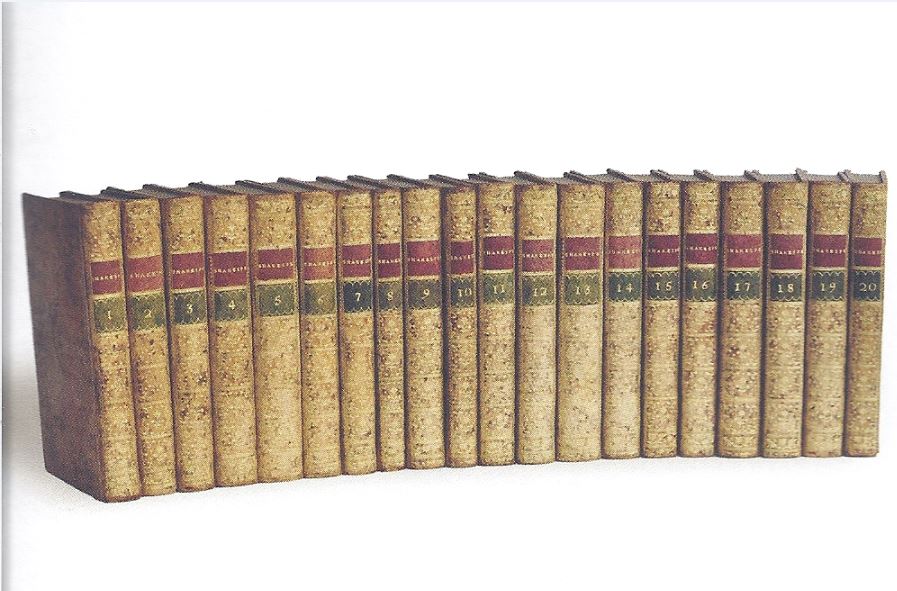 Lest anyone think Mme de Simiane did not read much serious literature, item 104 is Shakespeare Traduit de l'Anglais, twenty volumes of Shakespeare translated to French. For those who think it's a great undertaking to read all of Shakespeare, just imagine trying to translate it. Pierre le Tournier accomplished this monumental task and published the works from 1776-1782, the first French translation of the Bard's complete works. £4,000 (US $6,213).


Mme de Simiane's favorite writer was likely the Scottish novelist Sir Walter Scott. Certainly by number of books in her library that would appear to be the case. She seems to have purchased his novels starting around 1820 as soon as they were released in French. Fortunately, the French translator M. Defauconpret had an arrangement to obtain proof sheets of Scott's novels and quickly translate them to French. Mme de Simiane also went back and purchased his earlier works once she became a great fan of Scott. Of course, she was not alone in her fondness for his work. Scott was the first English novelist to really break through to the European audience, he being perhaps more popular in France than contemporary French authors. Scott was the developer of the historic novel, where he would take fictional stories based on historic events or times, combine them with some contemporary political messages, and add the romance that his readers wanted. Item 87 is one of his most noted works, Ivanhoe, set in 12th century England. This four-volume first edition in French was published in 1820, the same year as the first English. £2,500 (US $3,882).