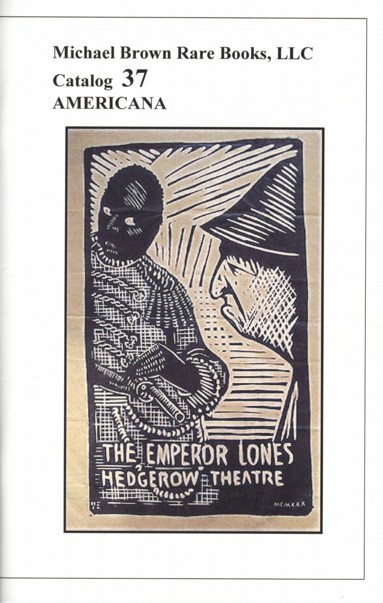 Michael Brown Rare Books' latest catalogue of Americana, number 37 to be precise, is filled with the unusual, uncommon, and unique. "Unique" is no exaggeration as there are many manuscript letters and diaries which give us a picture of life in America in the 19th century. In the days before cell phones, email, and instant messaging, people had to place their messages on paper, which made it possible that their thoughts would survive. I don't know whether these letter writers would have wished for this, but we are richer for it, as it affords us an opportunity to better see those times through the eyes of people who actually lived during them.

Item 85 is a fascinating collection of letters received by Beulah Johnson of Columbus, Wisconsin. Miss Johnson, born in 1816 and raised in upstate New York, moved to Columbus in 1842. This is a collection of 20 letters she received over the next 40 years, many from friends and family she left behind. What is interesting is the amount of gossip that fills these letters. We tend to think that ladies were too proper to gossip so much in the 19th century. Not at all. For years Beulah's friends kept her up to date on other people's business. We also hear much about men and a regular stream of comments about marriage, a topic that was evidently on the minds of many single women of the era. One advises, "Beulah John says you had better get married before you are thirty because girls think so much about it after that they entirely lose their minds." This must have been little comfort to Miss Johnson, as she was 29 at the time. The news in these letters of all her old friends who got married must have turned up the pressure on Beulah even more. A Mary Paddock writes her, "Bulah, Sarah Maxfield told me to tell you that you must not get all the old Batchelors for she was a coming out there and she wanted one..." In 1850, when Beulah was now 34, Philema Johnson writes, "When you get married come to Chicopee and make us a visit for I want to see you very much old maids are envious in such matters make a good choice don't be in a hurry take time you are young enough yet the market for old maids is dull here but the young have to take it willing or not..." Evidently Beulah never did marry. According to the 1860 census, she was still single and living with her parents at the age of 43. In the last of these letters, sent in 1882, her last name was still "Johnson." One can only wonder what her responses were to her friends and relatives on this subject, and why she remained single. Priced at $450.

B.J. Milam was an "honest farmer" who went on a long journey around the western United States early in the 20th century, and left us a very rare book about his travels. Its title is The Honest Farmer from Arkansas on a Lark Seein' the West, and it was published around 1905. The book takes the form of letters Milam wrote back home to his wife. Milam originally set out for the Oklahoma territory to claim some land, but wasn't satisfied with what he saw. Instead of returning home, Milam took off on a journey that would take him from southern Texas to northern Washington State and Canada. He tells us about the things he saw, including visits with Native Americans, and includes pictures he likely took himself. I don't know why this honest farmer didn't return quickly home, or whether poor wife Mollie got stuck slopping the hogs back on the Arkansas farm while Burt got to explore the West, but if you buy this book you may find an explanation. Item 110. $2,000.