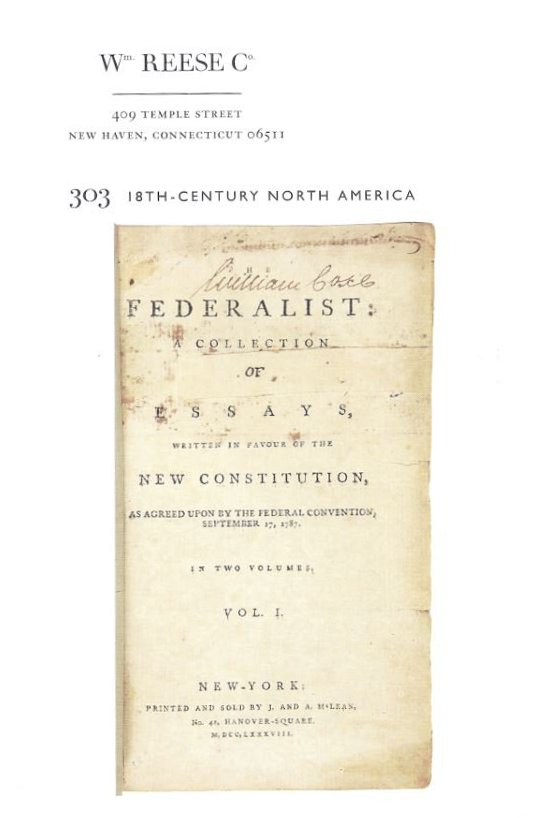 The 303rd catalogue from New Haven bookseller the William Reese Company is titled 18th-Century North America. There are actually a few items that date from the 17th century, but the great majority of these books, pamphlets, maps, and manuscripts are as advertised. While all of North America is covered, the material is primarily from the United States, or what became the United States, and mostly from the original colonies. There are a few that take us to what is now the Midwest, New Orleans, even the upper Mississippi, but a collection ending at 1800 will not have much pertaining to what we now know as the “West.” The greatest concentration of material comes from the Revolutionary War era, including the years leading up, wartime itself, and the early days of the new nation, as it grappled with devising a constitution and other early concerns. Additionally, there is a substantial representation of the French and Indian War, when America's allies and adversaries were reversed from the days of the Revolution. Here are a few of these interesting and important works.


Not all of the early English settlers of America came to find freedom, at least not in the normal sense. Something in the 50,000-100,000 range came as convicts, subjects of “transportation,” a term more often associated with the settling of Australia. However, despite the seven years of indentured labor they faced, for many it might have been relative freedom from deplorable overcrowded English prisons, and for some, it was an alternative to hanging. Until the early 18th century, transportation was arranged by merchants for whom the prisoners were bound, but in 1719, the process became more formalized with the adoption of the Transportation Act. This standardized the process of shipping felons to America. That act was passed on May 10, 1719, and item 108 is the manifest for what was likely the first such transportation as it is dated May 11. It lists 113 convicts who were being shipped to Maryland. The Americans whom they were to serve paid £10 per man for their seven years of service, cheap labor even by 18th century standards. The document is signed by various officials, including William Greenwood, commander of the ship Margaret that would bring these involuntary settlers to America. Naturally enough, this process came to an end with the Revolution, leading to the use of Australia as a penal colony a few years later. Priced at $12,500.


The French and Indian War effectively ended France's presence in America, turning vast amounts of land in what was then the west (now the midwest) over to England. The Englishman to penetrate the farthest into this territory in the pre-revolutionary days was Jonathan Carver. He hoped to find a route all of the way to the Pacific, though that goal proved to be elusive. Nevertheless, he managed to traverse the Great Lakes region, attain the Mississippi and travel north, branching off on what is today the Minnesota River, reaching the border of today's Dakotas. His account is found in item 32, Travels Through the Interior Parts of North America in the Years 1766, 1767, and 1768, published in 1778. He brought back much information about the Indians, relayed Indian reports of a great mountain range he did not see but we now know as the Rocky Mountains, and was the first to mention the word “Oregon,” though naturally he did not reach that place either. $9,000.


While Carver was traipsing across the wild west, things were not going so well on the home front. The British were levying various taxes on the colonists, and the latter were responding in less than a complimentary manner. In 1769, a group of leaked letters back to authorities in London was published in Boston under the title Letters to the Ministry, from Governor Bernard, General Gage, and Commodore Hood... Massachusetts Governor Bernard expressed his strong views on stamping out dissent in Boston. Who leaked this material is unknown, but these letters were not the sort of thing that would please already unhappy colonists. It was another step towards the revolution now only a few years away. Item 16. $3,500.


Item 31 is an unlikely early call for American independence: American Independence the Interest and Glory of Great Britain... The author was not an American but an Englishman, John Cartwright. He had been an officer in the Royal Navy and was now a notable social reformer. When this item was first published in 1774, not even the more radical Americans were yet calling for independence. However, Cartwright already realized a union based on colonial domination was not going to work long term. He advocated independence, which could then be followed with a loose union that would be beneficial to both sides. As we now know, his calls fell on deaf ears, to England's detriment. Offered is a copy of the first American edition, printed in Philadelphia in 1776. $9,000.