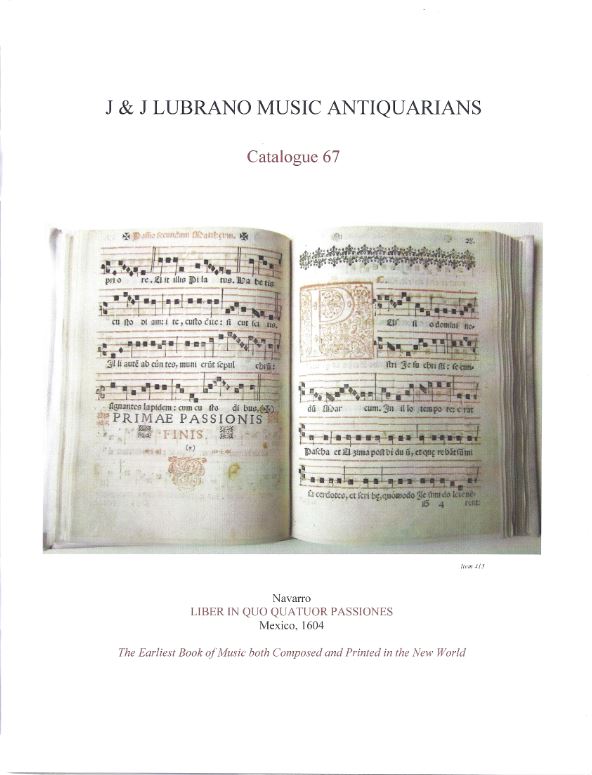 J & J Lubrano Music Antiquarians have issued their Catalogue 67. It is filled with the sound of music, printed music that is, and music-related material, ranging from the 16th to the 20th century. The catalogue is divided into four sections, autographs (which include manuscripts, letters, photographs, scores, and facsimiles), rare printed music, musical literature, and iconography. Over half of the items fall within the category of rare printed music, primarily 18th and 19th century. Most of the music falls into the classic category or opera, though there is material of a more “popular” nature to be found. Here are just a few of the over 650 items offered.


The item displayed on the cover is a rare book and a first, the first book of music both written and printed in the New World. While music was printed earlier in Mexico, this is also the only music book printed in Mexico in the 17th century. It was published in 1604, and for whatever reason, no more music was published in that country for the remainder of the century. The writer of Liber in quo quatuor passiones... was Juan Navarro, a Franciscan priest and choir singer. He composed music for the Passion narratives and other readings that would not be too difficult to sing. It contains commendatory letters from Dominican and Augustinian officials along with the archbishop and viceroy. Evidently Navarro wanted the endorsements so the book would be salable to orders other than his own. This copy has been expertly restored. There are only four copies known in the U.S., all at major libraries. Item 415. Priced at $35,000.


Item 399 is a first edition, unrecorded issue (possibly contemporary with or even predating the first) of Mozart's Le Nozze de Figaro (the Marriage of Figaro). It was published in 1796. Figaro was first performed on May 1, 1786, being heartily received by the audience though the subject was somewhat controversial. Mozart had brought in renown librettist Lorenzo da Ponte, whose libretto removed the most controversial political aspects of Beaumarchais' original book, thereby making it acceptable. This was the first of Mozart's most noted four operas, created during the last five years of his short life. $7,500.


Item 111 is a letter from perhaps the most famous singer of the 19th century, Jenny Lind. There is debate as to whether she was one of the best, some contemporary critics finding fault, but no one pulled in the crowds like Jenny Lind, particularly during her American tour. She had established a great reputation in her native Sweden when showman P.T. Barnum saw an opportunity, even though she was a great talent, rather than some odd “freak” of nature that was his normal specialty. He brought her to America for a year-long tour in which she regularly filled the house with adoring fans. This letter is dated November 16, but without a year. It was written in London. Lind returned to Europe from America in 1852, and moved to England in 1855, so it likely postdates that year (she died in 1887). Naturally, she continued to receive many requests for performances, though she sang with decreasing frequency as the years went on. This letter is evidently a response to such a request, and Ms. Lind politely replies, “I never accepted similar engagements and [it] would be out of the question for me to do a thing of that sort, overwhelmed as I am by all possible requests... If I had 10 throats instead [of] one – and no children instead of 3 – I might go out and do those little pleasure trips...” She has signed the letter “Jenny Goldschmidt,” using the last name of her pianist husband. There are no recordings of Lind's voice, though there are reports that she made a recording cylinder for Edison, now lost. $400.


If you want some good drinking songs, this is probably not the best place to look: Glorious Cause. A Collection of Songs, Hymns, and Choruses for Earnest Temperance Workers. The writer was George Frederick Root, a composer of popular songs in the pre-Civil War era who became most noted for his war songs during that conflict. Root was a strong Union supporter, and some of his war songs are still sung today, such as Tramp! Tramp Tramp! and Battle Cry of Freedom. As with many who took up the anti-slavery cause, Root also supported the cause of temperance. This collection was published in 1888. Item 222. $50.