The Dutch East Indies and Indonesia from Bestebreurtje Rare Books 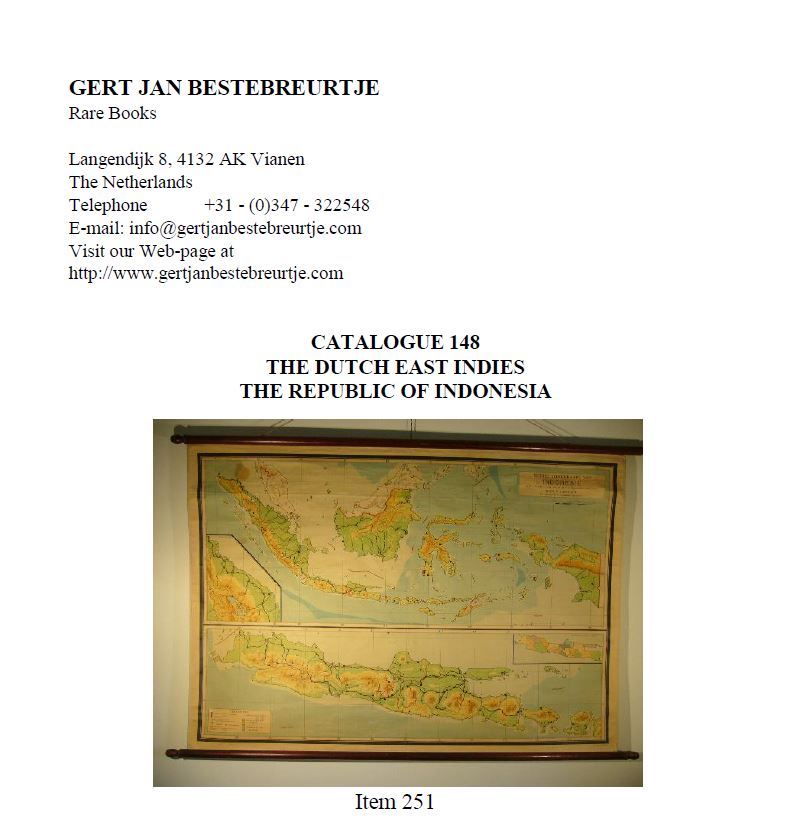 The Dutch East Indies and Indonesia from Bestebreurtje Rare Books

The latest catalogue from Gert Jan Bestebreurtje Rare Books covers The Dutch East Indies, The Republic of Indonesia. The Dutch have a long connection to the land now known as Indonesia. In the 16th century, the Netherlands was a major seafaring power, a nation exploring and trading with the wide expanses of the world outside of Europe that the small continent began to “discover” at the time of Columbus. At the start of the 17th century, the Dutch, through the Dutch East India Company, colonized the islands of Indonesia. After that company folded two centuries later, the country itself took over the colonies. The Netherlands would remain in control until the 1940s, when shortly after the Second World War, Indonesia gained independence. This newest Bestebreurtje catalogue covers these three and one-half centuries of Dutch rule, a selection of over 1,100 items pertaining to these times. These are a few samples of the type of material available.


We start from the earliest of Dutch times, specifically from the capital city of Jakarta. The Portuguese had traded with the islands as early as the 1510s, but around 1600, competition for the area became intense, with the Dutch and English particularly seeking influence. While various local groups resisted colonization, Jakarta fell to the Dutch in 1619. The city was renamed “Batavia,” a name it retained until independence after the war. Item 185 is a history of the years between 1600 and the city's fall in 1619, De Nederlanders te Jakatra, by Jacobus Anne van der Chijs, published in 1860. The account is based entirely on official records. Priced at €225 (euros, or approximately $293 U.S. dollars).


The item displayed on the cover of the catalogue is a large school map, Eerste schollkaart van Nederlandsch Indie. Along with the main map are insets of the islands of Java, Bali, and Lombok, a map of residences in Jakarta, and the east coast of Sumatra. The map was published in 1942 and comes with a supplementary leaf to correct the title from “Nederlandsch Indie” to “Indonesie.” Item 251. €295 (US $385).


Item 1052 is a major look at the natural history of the Malay Archipelago (today's Indonesia, Malaysia, and Singapore): Insulinde: het land van den orang-oetan en den paradijsvogel. The title translates to “Insulinde: the land of the orang-utan and the bird of paradise.” Insulinde is a name once used by the Dutch for Indonesia. This is a first Dutch edition of the two-volume (1870-71) work. The author was the notable British scientist Alfred Russel Wallace. Wallace had first traveled to South America to study the wildlife in 1848, but proceeded to the Malay islands and peninsula during the period from 1854-1862, where he performed extensive research on the land's natural history. He collected some 120,000 specimens along the way, and is noted for discovering a major demarcation in species in the islands. The animals on one side of the line mostly resembled those of Asia, on the other, those of Australia. The demarcation is known as the “Wallace Line.” Wallace is best known for the interpretation he made from the variety of animal species he found. Independently of Darwin, Wallace developed a similar theory of evolution. Darwin had reached the same conclusion earlier, but was reluctant to publish his findings, realizing they would be extremely controversial. When Wallace, oblivious to Darwin's unpublished conclusions, sent his proposed paper to Darwin, the latter realized he needed to publish his own theory. The result was that the first report on evolution, prior to Darwin's Origin of Species, was a paper prepared jointly by Darwin and Wallace published a year earlier. €450 (US $587).


Item 376 is Les Hollandais a Lombok (1894), an account of the 1894 Dutch intervention in Lombok by K. De Hartogh, published in 1899. The island of Lombok had remained independent of Dutch rule, but there were ongoing rivalries between the Sasak and Balinese peoples. As the Balanese had the upper hand, the Sasak appealed to the Dutch for assistance. The Dutch saw this as an opportunity to gain control over the island, so they came to the Sasak's aid. At first, the Dutch were driven back, but followed with re-enforcements that overwhelmed the Balinese and the capital city of Mataram. Dutch rule of the islands was successfully extended. €295 (US $385).