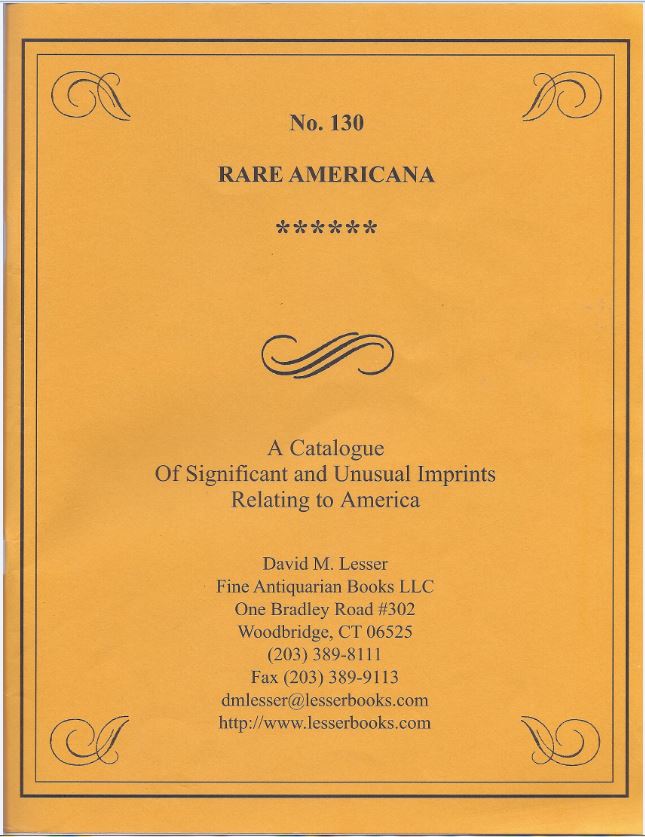 David M. Lesser Fine Antiquarian Books has released their catalogue No. 130 of Rare Americana. At a time when many booksellers have cut back on catalogues, Lesser has provided a consistent flow. Perhaps the theory is you can't sell books if people don't know what you have. Interesting idea.


Lesser's catalogues are focused primarily on 18th and 19th century pamphlets and other shorter form material pertaining to America. These are not so much the grandiose works as those that discussed the issues of the day – political debates, theological disputes, legal controversies, the incessant battle over slavery, and the various issues that affected people's day to day lives. These works truly bring us back to the times when America was a young nation, finding its way. Here are some samples.


The Oneida Community opposed slavery, but this pamphlet speaks of a different form of slavery than that most often discussed in 1850: Slavery and Marriage. A Dialogue. This piece was issued anonymously from John Humphrey Noyes' utopian community. It uses imaginary characters in debate to present its point. It makes the case that, “The truth is Marriage gives man the power of ownership over woman, and such power is as wrong and prolific in the case of Marriage, as in that of Slavery.” To the response that the law protects women from violence, the dialogue counters, “As in the case of Slavery, this protection applies only in extreme cases.” Item 170. Priced at $650.


Most Confederates gave in after Lee surrendered, but General Joseph Shelby and about a thousand men, sometimes referred to as “The Undefeated,” would not concede. Instead, they headed for Mexico, where they hoped to find favor with the French installed emperor Maximilian. However, Maximilian had his own problems. Rebels sought to overturn his regime, and Shelby and his men had to fight through them to make it to Mexico City. Those who made it offered their services to the Emperor. Maximilian declined, but did offer them land for a settlement. It did not last. Maximilian was overthrown in 1867, and the unreconstructed rebels were forced to leave Mexico. Item 95 is the only account of this venture by a participant, Shelby's aid John N. Edwards' 1872 book, Shelby's Expedition to Mexico, an Unwritten Leaf of the War. $1,250.


Item 172 is described as the “earliest American work” on comets, and while its author, Andrew Oliver Jr., was a founder of the American Academy of Sciences, we might be content just forgetting some of his theories. Oliver wrote An Essay on Comets, published in 1772, wherein he shows why the tails of comets point to their being inhabited worlds. He correctly points out that comets are not penal colonies where wrong-doers are “condemned to be frozen and burned alternatively.” Glad we got that out of the way. However, he does claim that comets are “so many inhabited Worlds, provided with every necessary for the comfortable subsistence of innumerable inhabitants, rational and irrational, like earth.” Most scientists no longer hold this view, and probably would count Mr. Oliver among the latter category of the innumerable inhabitants. $1,750.


If you have been searching for a memoir of the Brooklyn sewers, your dreams have been answered. Item 37 is the Brooklyn Water Works and Sewers. A Descriptive Memoir. Despite the not entirely appealing title of this 1867 work from the Board of Water Commissioners, it supplies in depth information about the Brooklyn Water Works, including reports on pipes, pumping stations, sewers, water sources, machinery, and the Works' history. It contains 59 lithographic plates. $650.


Item 49 is a collection of children's stories, Choice Tales; Consisting of an Elegant Collection of Delightful Little Pieces for the Instruction & Amusement of Young Persons. It includes such stories as The Discontented Squirrel, The Plum Cake, Remarkable Account of a Lion and a Dog, Indefatigable Labours of the Bee, and Flora and her Little Lamb. If you think that last title must be a ripoff of Mary and her lamb, this book was published in 1800, three decades before Mary appeared. Flora's is a more heart-rending story. A farmer, cruelly taking a flock of chained sheep to market, dumps one that has died off on Flora. Miraculously, the lamb is not dead, and Flora nurses her back to health. The lamb in time repays Flora, not only with affection, but a whole flock of lambs which provide sustenance for her poor family. The moral of the story of Flora's lamb is much clearer than that of Mary's $750.