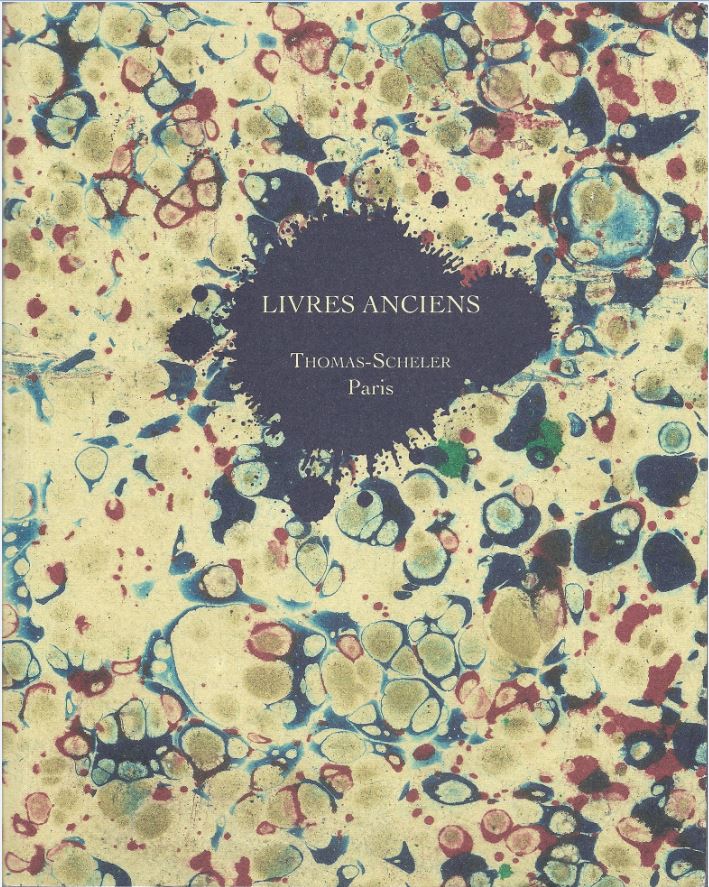 Librairie Thomas-Scheler, of Bernard and Stephane Clavreuil, has issued a catalogue of Livres & Manuscrits du XV au XX siecle (books and manuscripts from the 15th-20th century). As one would anticipate, the catalogue is primarily in the French language. The books are more of a mix, many in French, but because of the great age of some, there are also numerous editions in Latin. An occasional book in English will also be found, and even one partly in Nahuatl (it's a grammar). Subjects vary, including travels, natural history, science, literature, language, etc. Next, we will take a look at a few.


We start with the book that is partly in Nahuatl, Arte de la Lengua Mexicana. This is the 1726 edition, published just outside Mexico City, of a grammar by Antonio Vazquez Gastelu first published in 1689. Nahuatl is an indigenous language of Mexico, once in widespread use and still used by some Indians today. Gastelu was a professor of the language and his book is considered a good start for beginners. Item 40. Priced at €10,000 (euros, or roughly US $13,081).


Item 53 is a first edition of the account of perhaps the most important of all French voyages, that of Jean-Francois de La Pérouse. It is his Voyage autour du Monde, a round the world trip from 1785-1788. It was published in 1797, but by that time, La Perouse was nowhere to be found. La Perouse was sent out to follow up on the voyages to the Pacific by James Cook. Among the aims was to try to find a northwest passage, something neither Cook, he, nor many who followed were able to achieve. However, he visited many other places, from the Pacific Northwest of America, to Hawaii, China, Japan, Korea, Russia, the Philippines and Australia. Fortunately, at times he sent his notes back home by land, just in case. His last stop was in Botany Bay, Australia, where he conducted a pleasant visit with the British. He then left, never to be heard from again. At the time of the publication of his book, his fate was still unknown, though several vessels had been dispatched to find him. It would not be until almost 40 years after his disappearance that wreckage of his ships was found off of an isolated Pacific island. €30,000 (US $39,246).


Item 37 is “a botanical masterpiece,” an important early work on various botanical specimens. The author was Leonhard Fuchs (for whom fuchsia is named). Offered is a first edition of De historia stirpium commentarii, published in 1542. While primarily an herbal, as was botanical texts before his, Fuchs presented far more detail than his predecessors. The book contains over 500 woodcuts of plants, which display them in far greater detail than offered before. The result is a true work of botany, rather than simply an herbal. Described are around 500 plants, including both wild and domesticated species. While most were plants found in his native Germany, around 100 were foreign, including several from America such as chili peppers and pumpkin, along with maize, which he misidentified as originating in Turkey. €75,000 (US $98,050).