Accounts from the American West from Old West Books 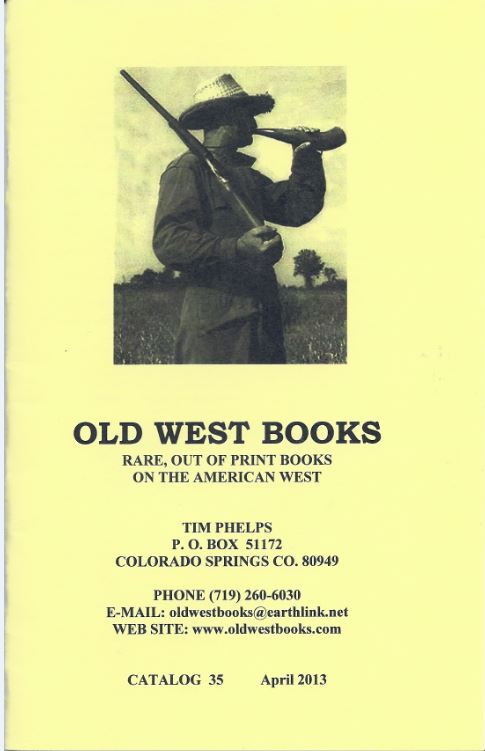 Accounts from the American West from Old West Books

Old West Books has issued their Catalog 35 of books on the American West. The books mostly cover the days of early discovery, settlement and growth of that large territory west of the Mississippi. The time period is 19th to early 20th century. Many are accounts of people who lived through the time and participated in its notable events. That includes some of the earliest explorers, those who made the arduous journey across the continent before there was public transportation, those who faced Indians, and those who had to deal with toughened gunslingers (or were such themselves). The Old West wasn't an easy place to live, but it didn't lack for excitement. Here are a few of these accounts.


Margaret Frink was one of those who made the long journey west. Her account can be found in Journal of the Adventures of a Party of California Gold-Seekers Under the Guidance of Mr. Ledyard Frink during a Journey across the Plains from Martinsville, Indiana, to Sacramento, California... She traveled in 1850 with her husband and three other men. Mrs. Frink provides a detailed description of the trip, including preparation, gathering supplies, and the first leg, from their home in Indiana to the starting point in Hannibal, Missouri. She even provides background on her husband and herself from before their journey. Their journey took them along the South Platte River, up to South Pass, down the Bear River, and then through the most difficult part, the deserts of Nevada. Eventually, they cross the Sierra Nevada and settle in Sacramento. She concludes by telling of their life in Sacramento and what became of the others who traveled with them. This is a rare book, printed in only 50 copies for family and friends. Offered is a presentation copy, and it includes a newspaper clipping announcing the death of Ledyard Frink. Item 32. Priced at $3,500.


Here is another woman's account of life in the Old West. Item 24 is Fort Reno Or Picturesque Cheyenne And Arapahoe Army Life. Before the opening of Oklahoma. The author was Mrs. Daniel (Ida Casey) Dyer, daughter of a former governor of Illinois. Her husband had a varied life. He joined the Union army late in the Civil War at the age of 15. He and Ida were married in 1870 but divorced in 1878, only to get remarried a year later. Perhaps that was a sign of a shaky relationship. They had six children, but none lived past the age of three. Daniel spent much of his life in business, hardware and real estate, but served as an Indian Agent in the 1870s, and again in 1884 for the Cheyenne-Arapahoe at Darlington Agency in Indian Territory. He served briefly as the first mayor of Guthrie (Oklahoma) after the Indian Territory was opened for settlement. Ida evidently harbored serious resentment towards Daniel. She felt he treated everyone generously except her, and she used her book to point this out. She never had an evening dress, Mrs. Dyer claimed. “This gentleman of noble and generous impulses to the widows and orphans at large tells this cherished partner of his bosom, in picturesque language, that would make the cold chills run through a graven image, that it was not necessary for money to be squandered on such articles...” This was a relationship with problems. Mr. Dyer reportedly responded by having as many many copies of this book as he could find destroyed. It was published in 1896, and the following year, for the second time, the couple divorced. Mr. Dyer went on to have a very successful business career, including a not so successful mining partnership with Buffalo Bill, donated an enormous collection of Indian artifacts to Kansas City, and died in 1912. Ida did not do as well, fighting a legal battle for the artifacts he gave away, finally achieving a settlement, but died shortly thereafter in 1922. $475.