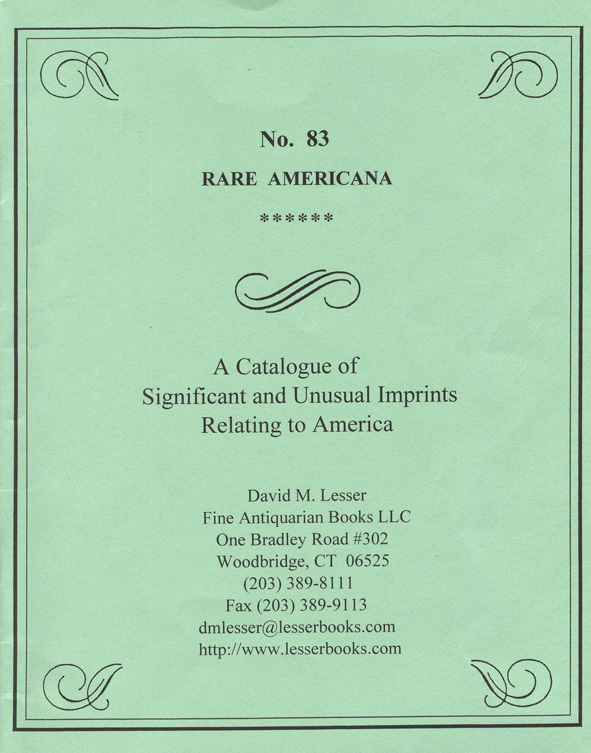 David M. Lesser Fine Antiquarian Books has issued its 83rd catalogue of Rare Americana. Lesser's catalogues are like a collection of snapshots of America in its earliest years. There are a few exceptions, but most items come from America during the period of the 1760s through 1860s. These are not the most famous of documents, such as the Declaration of Independence. Rather, what we see are pictures of life as typical people experienced it. We hear personal quarrels, sermons from preachers and educators, oratory from politicians, debates over slavery and other issues of the day, and lurid stories of crime. Not every speech of the day was a Gettysburg Address or Washington's Farewell. In fact, few were. Here is what people were really reading in America's first century.

Lucretia Cannon was not exactly a gentlewoman. Indeed, "Patty" Cannon was as notorious as they come. She appeared in the area along the Delaware-Maryland border, probably coming from Canada, around 1810. Already a woman of ill-repute, she disposed of her husband the old-fashioned way, perhaps the first of many men to meet their final rewards with Patty's assistance. She set up a tavern in Johnson's Corners (now Reliance, Delaware) and formed a gang of loyal and ruthless followers. Apparently, Patty was a tough, large, physically strong woman who could terrorize any man around. She made her tavern a welcoming spot for traveling slave dealers, a group generally not that popular at northern establishments. Her gang would pray on the weaker ones, relieving them of their money. Lest you think this was some sort of protest against the slave trade by Patty, she soon expanded into the business of capturing free Blacks and selling them into slavery in the South. She frequently had these new slaves shackled in the attic of her boarding house and tavern. Her luck ran out in 1829 when she was arrested for four murders, although she was suspected of over twenty. While awaiting trial in jail, she poisoned herself, making use of the one foolproof method of avoiding execution. The book is Narrative and Confessions of Lucretia P. Cannon, who was Tried, Convicted, and sentenced to be Hung at Georgetown, Delaware, with Two of her Accomplices. Containing an Account of some of the Most Horrible and Shocking Murders and Daring Robberies Ever Committed by One of the Female Sex. It was published in New York in 1841. Pictures show her gang shooting at slave dealers, and Patty burning a black child in the fireplace. Item 21. Priced at $1,250. For those of you who would like to meet Mrs. Cannon, she may be visited at the Dover Public Library in Dover, Delaware. Her skull is kept in a hatbox in the library's staff area, but their website says they "will be glad to show it to anyone who would like to see it." Visiting hours coincide with the library's regular hours.