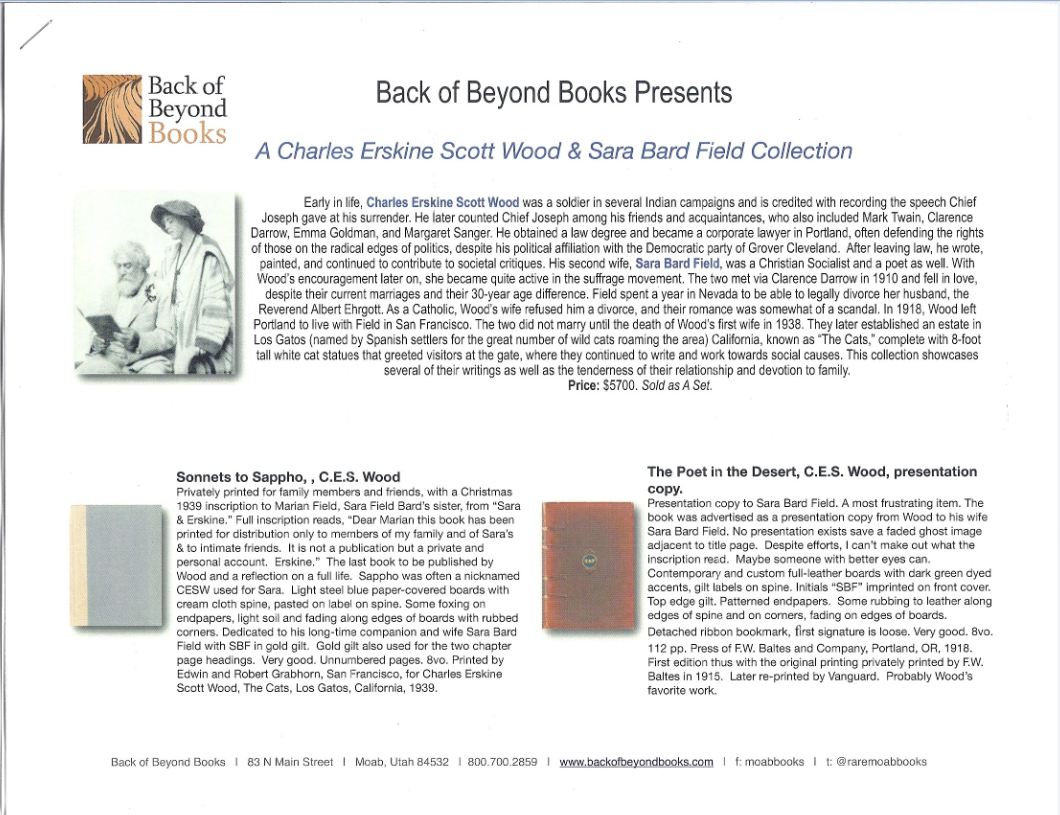 Charles Erskine Scott Wood was a very unusual individual – an Indian fighter whose radical politics would make him a great supporter of their cause. Wood graduated from West Point in 1874, and served as an officer in the U.S. Army during the Nez Perce War of 1877. He was present when Nez Perce Chief Joseph finally thew in the towel after a long, brave resistance against overwhelming odds. It was Wood who wrote down the Chief's words at the final surrender, including the sad but memorable line, “I will fight no more forever.”


Wood went on to be a great friend of Chief Joseph. He also would become a friend to many other radical and liberal thinkers, including Clarence Darrow, Emma Goldman, Margaret Sanger, Robinson Jeffers, Ansel Adams, Langston Hughes, John Steinbeck, and Mark Twain. He later moved to Portland, Oregon, where as an attorney, he regularly supported labor and similar causes. His friendship with Mark Twain would be based on their both being ardent opponents of imperialism, making them opponents of the otherwise progressive president, Theodore Roosevelt. Later on, Wood left his wife for a much younger woman, Sara Bard Field, who shared his political ideals. They had been introduced by Darrow. The two settled in California, where he resided until he died in 1944 at the age of 91.


Back of Beyond Books recently issued a brochure of A Charles Erskine Scott Wood & Sara Bard Field Collection. It includes numerous writings by the two. She is Sara Field rather than Sara Wood as they were not married until Wood reached 85 years of age. He was unable to get a divorce from his first wife, so marriage was not possible until after she died. Wood and Field were both prose writers and poets, and Wood was an artist as well. Here are a few of their items from this collection.


Poems from the Ranges. This compilation came from the pen of C.E.S. Wood (he frequently used initials rather than his full name). They are poems set in the eastern desert of Oregon. It was published in 1929 in a run of 450, with the first 50 copies numbered and signed. This is #27 of the signed copies. The signed copies sold for $12.50 in 1929.


The Poet in the Desert. The previous item was not Wood's first work from Oregon's eastern desert. This one is a long poem that relates some of the problems Wood saw in society at the time of its publishing in 1915.


Selected Poems of Charles Erskine Scott Wood & Sarah Bard Field. This is a selection of poems by both of the writers, ones they chose themselves. The introduction describes it as “a tribute to a loving friendship of more than twenty years.” It was published in 1937, the year before they were finally able to marry, and Sarah Bard Field obtain a fourth name too. This was printed in a limited run of 250 copies by the noted fine printer, the Grabhorn Press.


The Beautiful Wedding. This is not about the authors' late in life wedding. This is Wood and Field's description of the wedding of her daughter, Kay, in 1930. It is “lovingly inscribed by The Chroniclers – Their Mother and Pops in the full belief that they will find it pleasant reading all their lives...” It was privately printed by the Grabhorn brothers.


Speech of Sara Bard Field. February the Fifteenth MDCCCCXXI at Washington D.C. That would be 1921. Women had finally been granted the right to vote the previous year, and Field was speaking for the presentation to Congress of the marble busts of suffragists Lucretia Mott, Elizabeth Cady Stanton, and Susan B. Anthony. This copy is inscribed by Ms. Field. It was printed by another San Francisco fine printer, John Henry Nash.