A Diamond Jubilee Catalogue from the Raab Collection 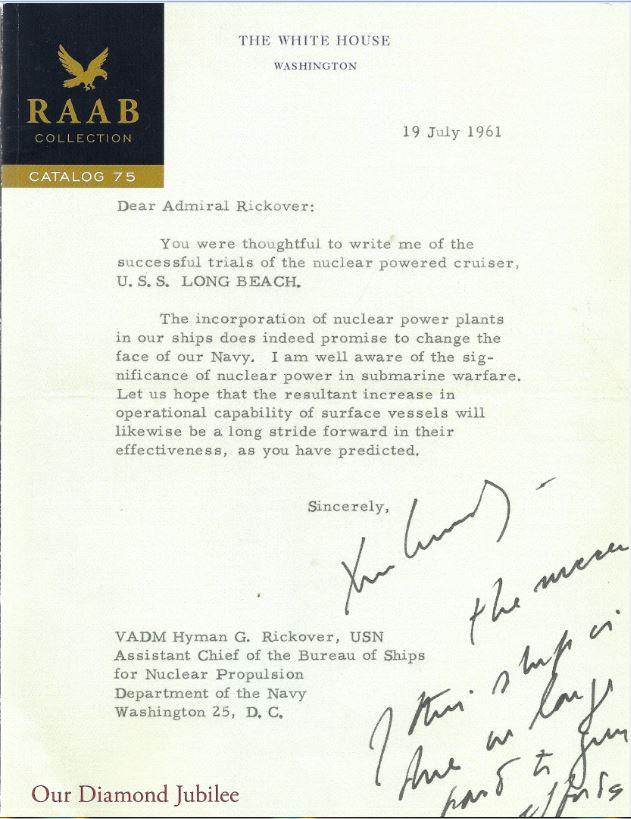 A Diamond Jubilee Catalogue from the Raab Collection

The Raab Collection has issued Catalog 75 Our Diamond Jubilee. The Diamond Jubilee, naturally enough, refers to the catalogue number, as while the Raabs are on to their second generation in the business, they are not quite that old yet. Twenty-five years is closer to the mark. They feature historical documents, many written by hand, most signed. The majority are American, but there are some amazing pieces from Europe in their catalogues as well. So, you can add the likes of Churchill and Napoleon to Washington and Lincoln. Raab features much in the way of important material. Their catalogues are among the best you can find, as they carefully place each item within its historical setting. This catalogue provides us with a free history lesson to go along with the material, which is not quite offered for free. Here are a few samples.


We will start with one of those occasional European items, because it comes from one of the most dramatic of times in French history. Somehow within the short span of four years, from 1789-1793, France went from an imperial monarchy, to first a combination monarch and republican government, to a republican government, to uncontrolled terror and killing of anyone deemed even the slightest threat to the supposedly republican madmen in power. This document comes from the middle of that period, when hopes were high for a new and free France. The storming of the Bastille prison in 1789 had forced King Louis XVI to recognize the growing power of the ordinary citizens of France, and he had little choice but to cede part of his authority to the legislature. By 1791, the King had become a virtual prisoner in his home in Paris. In September of that year, the National Assembly passed a new constitution stripping the King of most of his powers. Louis no longer had a choice. He had to sign it. Item 7 is the letter the King sent to the leader of Assembly sending along his official proclamation accepting the new constitution. For a time, it set up this constitutional, weak monarchy, but it would be less than a year before the Revolution turned far more radical, Louis was arrested and imprisoned, and six months further down the line the King was executed at the guillotine. Priced at $55,000.


Next we will combine France with the United States, and in a far nobler moment. The year was 1824, Napoleon had come and gone and the monarchy restored, when an older French gentleman made what turned out to be a year-long trip to America. Everywhere he went, he was greeted as a conquering hero, and that gentleman visited all 24 states that were in the union at that time. He also visited all of the major political figures of the era, including elderly former Presidents John Adams and Thomas Jefferson. This beloved French visitor was, of course, the Marquis de Lafayette, who brought his military expertise and other assistance to America where, serving under George Washington, he helped America win the Revolution. Now, Washington was gone 25 years as were most other heroes of the Revolution, and those remaining who participated old men. Lafayette came at the invitation of President Monroe, who received him at the White House. He was also visited by James Madison, the country's only other living ex-President. Lafayette had not been in America since the end of the Revolution, and this would be his last visit. Everywhere he went, he was greeted with large crowds of admirers who strained to see the last surviving general from the Revolution. He traveled 6,000 miles, was feted with great parades along the way, and near the end of his trip, laid the cornerstone for the Bunker Hill monument. Item 1 is a manuscript copy of three toasts given on June 13, 1825, in Pittsfield, Massachusetts, signed by the speakers. One was Lafayette, the second was Williams College President Edward Dorr Griffin, and the third George Washington Lafayette, Lafayette's son and the namesake of his greatest hero. To his guests, Lafayette proclaimed, “May they more and more enjoy the blessings of Republican freedom and Republican industry.” $9,500.


President Andrew Jackson made his share of enemies, and no one could hold a grudge quite like Jackson. His fight with John Quincy Adams, whom he believed stole the 1824 presidential election from him, is legendary. He would have ongoing fights with many of the figures who would form the Whig Party in the 1830s, but also with his own cabinet and fellow southern Democrat John C. Calhoun, whom he battled over nullification. Among those he despised was Davy Crockett, who opposed many of Jackson's policies, including Indian removal. Jackson would succeed in drumming up enough opposition to Crockett to make him lose his last election for Congress. Disgusted, Crockett left Tennessee for Texas, a poor career move when he ended up at the Alamo at the worst possible moment. However, his old congressional seat would be recaptured by his son, John Wesley Crockett for two terms. It is the younger Crockett to which Jackson refers in this letter to a friend from 1839, after Jackson had left office: “You must not permit that hypocritical scamp Crockett to be elected – he is the mere tool of Bell & J.Q. Adams. Without principle or talents & has become a good Whig by learning the art of lying & slandering good & honest men.” Ol' Hickory would have fit in well with today's politics. Item 20. $15,000.