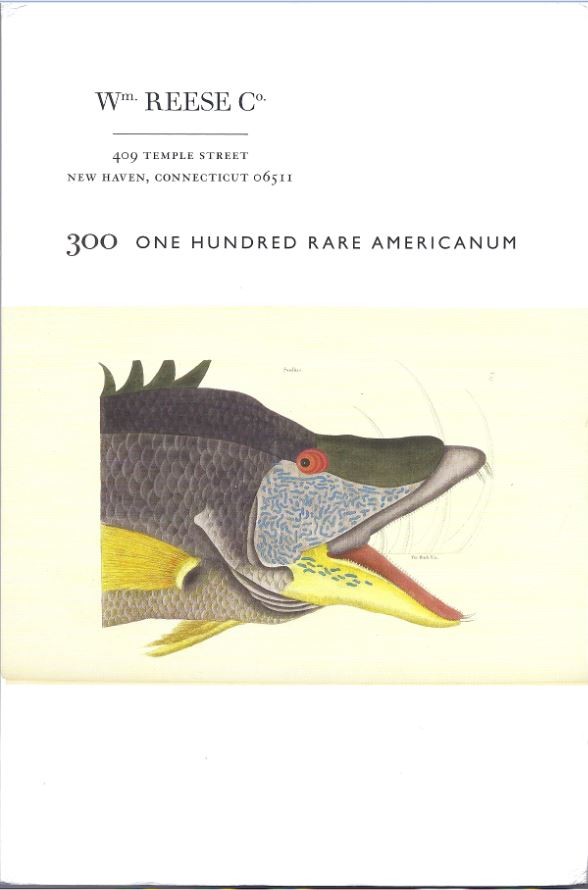 The William Reese Company has reached a major milestone in the antiquarian book field – the printing of their 300th catalogue. That is as rare as most of the books they sell. The milestone is not easily achieved. Few have made it. Sure, there are a few English booksellers, such as Sotheran's and Maggs Bros., that have reached the thousands, but Henry Sotheran and the brothers Maggs have long since departed this planet (though Maggs is still in the family). William Reese, the person, as opposed to William Reese, the company, is still firmly in charge after all these years. All these years means 33, the first catalogue having been published in 1980 (though Mr. Reese was in business several years prior to that). He acknowledges this could not have been done alone, and recognizes the many who helped along the way. That said, time will not sit still for the New Haven bookseller, and we anticipate #301 will be arriving in another month or so.


There is another number associated with this catalogue. Its title is One Hundred Rare Americanum. Reese handles a variety of types of books and ephemera, but the firm is most known as the leader in Americana. The best in the field pass through their doors, and this catalogue is filled with the best of the best. There is nothing here you wouldn't love to have. That said, this selection is not for beginners, unless you are a beginner starting at the top. There is nothing inexpensive here, except, perhaps, comparatively to some of the other items, but books are priced in six figures because they are worth six figures. You will get what you pay for if you choose to be a buyer. Here, now, are a few of these spectacular items.


We will start with what Reese notes is “by far the greatest rarity of Presidential books...” In 1780, future President John Adams traveled to the Netherlands to seek aid for the revolutionary cause. He met with Hendrik Calkoen, a sympathetic leader of the local legal community. Calkoen had some questions, and the two men agreed he would write them down in a letter, and Adams would respond. That the Dutchman did, and Adams responded to his 29 questions in a series of 26 letters. They cover many aspects of America and its revolution. Several years later, Adams decided he wanted to preserve his answers, but he did not want them made public. So, he decided to have them published in 1786 in a very small run, for friends and associates. They were included in a book published in London, with the simple title Letters, in an unknown but small quantity. Reese has been able to locate only six others still known to exist, all but one of the others now in institutional hands. One originally went to George Washington, one to British radical politician Brand Hollis, one probably came from the Adams family, and this one was inscribed to Ward Nicholas Boylston, Adams' cousin. The provenance of the remaining copies is unknown. This privately printed collection of Adams' letters was later reprinted under the title Twenty-six Letters, upon interesting subjects, also dated 1786 but probably not printed until 1789. Item 2. Priced at $275,000.


From Adams the father and future President, we go to Adams the son and past President. John Quincy Adams served as President from 1825-1829, but after his term was over, he did something no other president before or after has done – returned to Congress. He served in the House of Representatives from 1831 through his death in 1848. During those years his views evolved, and he became a passionate leader of causes he mostly ignored during his presidency, protection of the first amendment right to petition the government, and the need to bring an end to slavery. Those issues would come together in 1836 when the House passed the “Gag Rule.” This forbid the reading or discussion of petitions from constituents that opposed slavery. This particularly upset Adams as he was the one most vocal in presenting these petitions to the House. Item 4 is a letter Adams wrote to a friendly constituent back home in 1837. He covers a few subjects, including Revolutionary War pensions, of particular interest to the recipient. Most significantly, Adams admits that at one time he was not particularly interested in the subject of abolition. “I have perhaps some apology to make to the warm hearted and well-meaning abolitionists, whose zeal for the suppression of an enormous evil has been more fervent than my own. I have certainly none to make to the Ruffian slaveholder, who would burn me at the stake or send me to the Penitentiary, for asking the question, whether among the rights of human nature, of which the American slave is robbed by his master is included the right to Petition to Congress.” He goes on to note that he has been a sole voice fighting for the right to petition against the “Gag Rule.” It would take some time, but Adams would finally succeed in putting together a coalition to repeal this odious rule in 1844. $125,000.