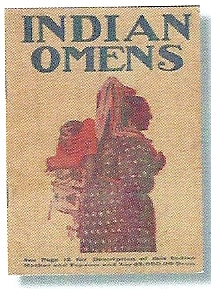 
As long as we're on patent medicine fiction, here is another classic: Seven and Nine Years Among the Camanches and Apaches. This gem by Edwin Eastman was published by Clark Johnson M.D. in 1874 (second edition). It tells of Eastman's supposed travails amongst the Indians, but he did bring back one prize from all of those years of suffering – the formula for Dr. Clark Johnson's Indian blood syrup. This fantastic elixir obviously didn't carry Dr. Johnson's name when produced by the Indians, but the good doctor generously made this stuff available to the public, for a price. This grotesque fictional tale was used to promote the patent medicine. Item 27. $50.