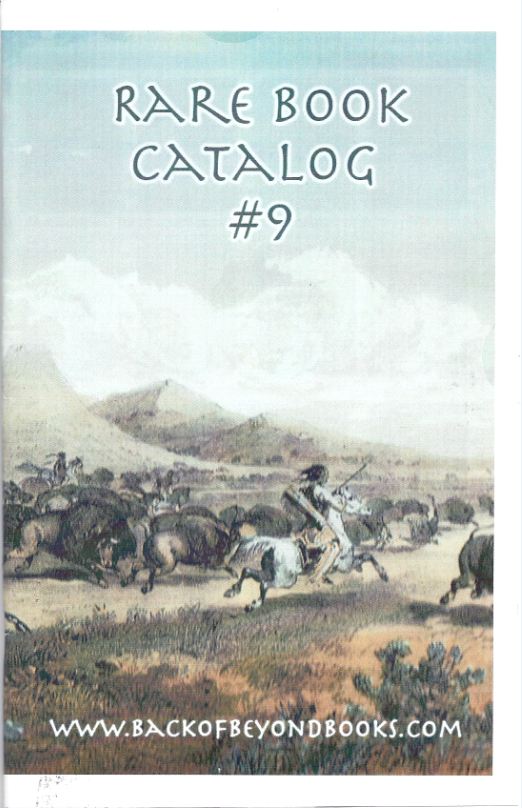 Back of Beyond Books has published their Rare Book Catalog #9. This one features selections from their Native Americana collection. America's natives almost always received the short end of the stick. Treaties were usually either unfair from the beginning, or ignored by the American government if they were not. The Indians were regularly described as “savages” by those who took their land, destroyed their sources of food, and looked for any excuse to wage war on them. Not all of the whites behaved in such a manner. We also find works by people who respected America's natives, who tried to preserve their culture and treat them fairly. Sadly, for all the noble efforts, the Indians always ended up on the short end. They were simply outnumbered. Here are some of these works pertaining to the settlement of America and its impact on her natives.


We will start with one of the most important looks at the Plains Indians while still relatively untouched by western influences. This is not a first edition, but that would cost something north of $100,000, probably eliminating most readers from contention. Item 52 is the History of the Indian Tribes of North America by Thomas McKenny and James Hall. Originally published in three volumes 1842-44, this three-volume set was published by John Grant in 1933. It contains 123 full-page color lithographs, mostly from drawings by Charles Bird King, with Hall's text. McKenney, who lost his job as Superintendent of Indian Affairs when President Andrew Jackson took office in 1829, decided he needed to head west and pictorially preserve the remnants of traditional Indian life before it was too late. Most of the plates depict individual Indians. Fortunately, McKenney had these published in book form as all but five of the portraits were lost in the Smithsonian fire in 1865. This 1933 set includes the rare dust jackets. Priced at $1,275.


Another man who undertook a similar mission during the 1830s was George Catlin. Catlin was an artist who went out west to sketch the Indians. He published his drawings in 1844, but Catlin also took his artwork on the road. He traveled around North America and Europe showing his images of what must have appeared to westerners as exotic people. Later on, he also took some Indians with him to Europe to make his show even more compelling to local audiences. Item 12 is Catlin's Adventures of the Ojibbeway and Ioway Indians in England, France, and Belgium, a self-published third edition from 1852. It recounts his travels around Europe with his collection and his Indian representatives. $500.


Financial difficulties forced Catlin to sell his collection in 1852. However, he continued to travel, and visited tribes in South America as well during the 1850s. He wrote about his many adventures among the Indians in a book for children published in 1867: Life Amongst the Indians: A Book for Youth. Those original portraits Catlin was forced to sell ended up being donated to the Smithsonian by the purchaser's widow in 1879, where unlike King's original drawings destroyed in a fire, they survive. Item 13. $150.


One person who fought for Indian rights was Helen Hunt Jackson. She heard Indians speak of their plight and undertook extensive research. She was appalled by such things as land confiscation and forced removal. In 1881, she published this book: A Century of Dishonor: A Sketch of the United States Government’s Dealings with Some of the Indian Tribes. Just to make sure her point was heard, Mrs. Jackson sent a copy to every member of Congress. It may have raised some sympathy, but little action. She would have more success in arousing the public a few years later when she wrote a fictional tale of an Indian woman entitled Ramona. Item 42. $125.