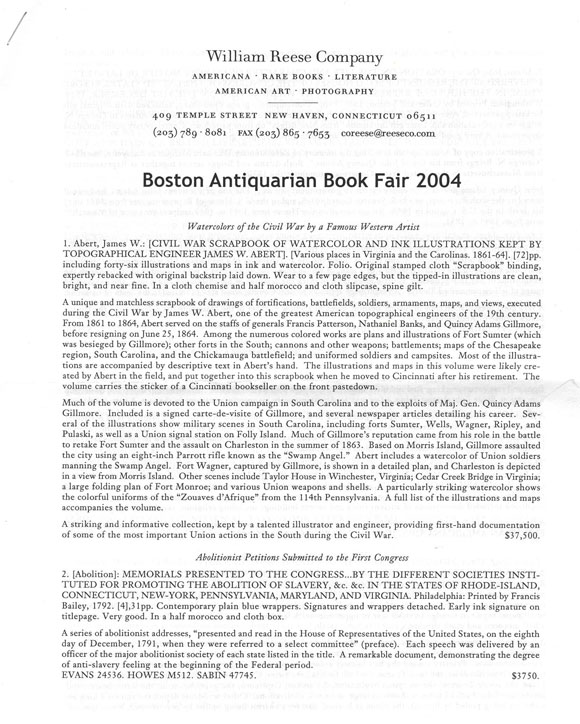 The William Reese Company issued a pamphlet of listings for the recent Boston Antiquarian Book Fair 2004. This is not a typical themed Reese catalogue. It is a collection of items which Reese evidently felt would have the broadest appeal, since it was presented to a book fair audience. These are certainly some very desirable books, and while some have likely found new homes, those not purchased at the fair are undoubtedly still available to those who did not attend. Here are just a few.

We'll start with the earliest, an incunable from 1489. It is the first Latin edition of 9th century astrologer Albumasar's Introductorium In Astronomian. Albumasar (or Albumazar, or Abu-Mashar Jafar ibn Mohammad) was one of the greatest early Islamic teachers of astronomy. Born in what is now Afghanistan and flourishing in Baghdad (those names are quite familiar today), he believed the world was created when the seven planets were in conjunction in Aries and will end when they are in Pisces. Reese does not tell us when that will be. Item 5. $40,000.

Item 81, by Thomas Palmer, is An Essay of the Meanes Hovv to Make Our Trauailes, into Forraine Countries, the More Profitable and Honourable. You know from a title like this that either this book is very old, or Palmer was a terrible speller. Fortunately, it's the former. Palmer had accompanied Cadiz on his expedition and used his experience to provide something of an early travel guide. This book was printed in London in 1606, and as early as it was, Palmer does provide some information on America and the customs of its native Indians. $7,500.

Item 3 is a most interesting piece of Americana relating to the transition from the nation's first to its second generation of leaders. It is John Quincy Adams' Oration on the Life and Character of Gilbert Motier de Lafayette... The speech was delivered on December 31, 1834, after the passing of the French hero of the American Revolution. Lafayette came to America as a wealthy young man to serve under George Washington and lead American forces to victories. While a great hero in America, after the Revolution, Lafayette would return to France and be involved in the many changing governments that nation would experience in the following decades. He would not come back to these shores again until a visit in 1824, but he would not be forgotten in his second home. At his passing, virtually all of the other leaders of the American Revolution had passed on, and even Quincy Adams, second-generation American leader, was now a former president, serving his remaining years as a member of Congress. This particular copy of his Oration is a presentation copy from Adams to George Briggs. Briggs was a fellow Massachusetts congressman and future governor of that state. $7,500.