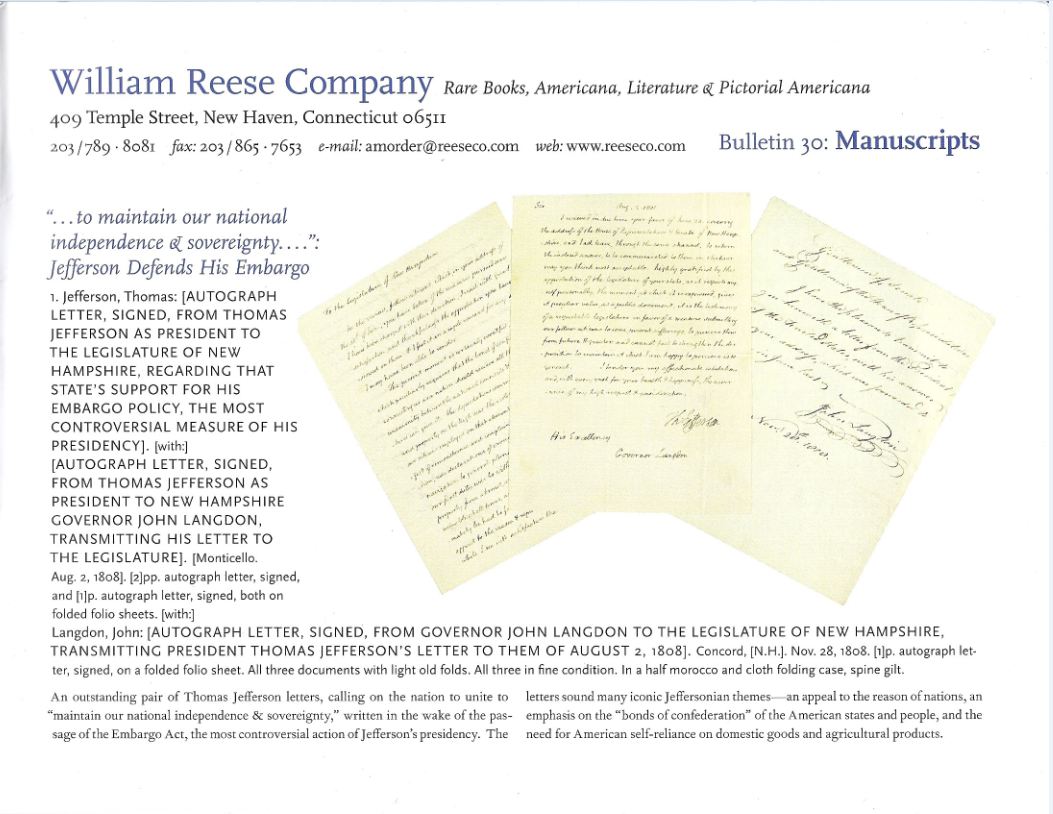 The William Reese Company has issued a catalogue of 32 items for those who collect material that is unique - Bulletin 30: Manuscripts. Naturally, these are going to be one-of-a-kind items, written in the hand of the document's creator (or occasionally a secretary). The material is North American in origin or import (we will include Mexico in North America), and ranges from colonial times to the Civil War. The heaviest concentration is from the Revolutionary War era. By North American in import, we include reports by French agents in the United States or the French sculptor who created a statue of Washington, reports of British generals during the American Revolution, and Elizabeth Custer's account of her journey to Scotland. Here are some examples of what you will find in this collection.


We will start with the manuscript (in the form of an unsigned letter to her sister) from the indomitable Mrs. Custer. We all know the sad story of her husband, George Armstrong Custer, who went off to battle the Indians while not entirely following his script, only to discover he and his troops were surrounded. Not only did it end General Custer's life, but it left his reputation in tatters. Mrs. Custer spent the rest of her life, and she survived her husband by over half a century, rehabilitating him. She did a remarkable job, though that reputation has perhaps slipped a bit since she finally joined him. In this letter from 1891, 15 years after General Custer died, you can see he is still not far from her thoughts. In Scotland, Mrs. Custer was the guest at Cluny Castle of Andrew Carnegie, the American steel magnate. She notes that her husband would have enjoyed the visit. She points out that Carnegie “...said beautiful things of Autie [her nickname for her husband], how his country honored him and then some such sentiments for me. I was overwhelmed and taken greatly by surprise and I wish that Autie might have listened. He would not have any doubt that Mr. Carnegie believed my fifteen years of endeavor to honor his name were not in vain.” Item 8. Priced at $5,000.


Elbridge Gerry was one of America's most notable founding fathers, though he has been much forgotten over the years. He was a signer of the Declaration of Independence, a member of the Continental Congress, a representative to the Constitutional Convention (he opposed the new Constitution for various reasons), Governor of Massachusetts, and Vice-President of the United States under James Madison. Still, he is mostly remembered for the political device he employed briefly in Massachusetts whereby election districts were redrawn in ways favorable to the party in power. The practice, even more popular today, carries his name - “gerrymander.” Item 11 is a letter Gerry wrote home to his wife Ann during the Constitutional Convention, on August 21, 1787. Gerry had married 21-year-old Ann Thompson, 20 years his junior, the previous year. Perhaps the age difference bothered him as he writes, “...I do not expect a long life, my constitution appears not to be formed for it.” He also talks of proceedings at the convention and how “sick of being here” he is. Despite his fears of a short life, Gerry lived another 27 years, though he did die in the middle of his term as Vice-President. Ann Gerry lived until 1849, and as such was the last surviving widow of a signer of the Declaration of Independence. $12,000.