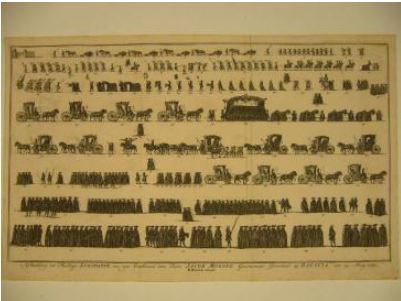 Item 43 is a manuscript map of the west coast of Ceylon (Sri Lanka), including the area of the fortified castle of Columbo. It is dated 1757 and was drawn by Baltus Jacobsz van Lier. Van Lier went to Colombo as a soldier working for the VOC, but in 1743 was appointed to a position as land surveyor. €1,950 (US $2,606).


Jacob Mossel set off for the East Indies as a cabin boy on board ship at age 15. However, he was of noble blood, which allowed him to obtain better positions with the VOC after his arrival. He worked his way up the ladder. In 1721, he was sent to Dutch Coromandel on the Indian coast, and in 1730, he married the Governor's 14-year-old stepdaughter. He would later become Governor of Coromandel himself, later Director-General of the Dutch East Indies, the second highest office, and finally, Governor of the East Indies in 1750 on the death of his predecessor. This was a period when the Dutch East India Company was in decline, and there was little he was able to do to stem the tide. He stopped one war, but then lost a territorial battle to the British. He took some very modest steps to reduce the rampant corruption in the VOC, most notably setting regulations to limit the public display of wealth, though he probably benefited personally from some of the corruption. His health deteriorated in the latter years of his governorship and Mossel died in 1761. By the time the engraving that is item 46 was issued, Mossel was no more. It depicts the very impressive funeral procession he was given on May 19, 1761. €225 (US $300).