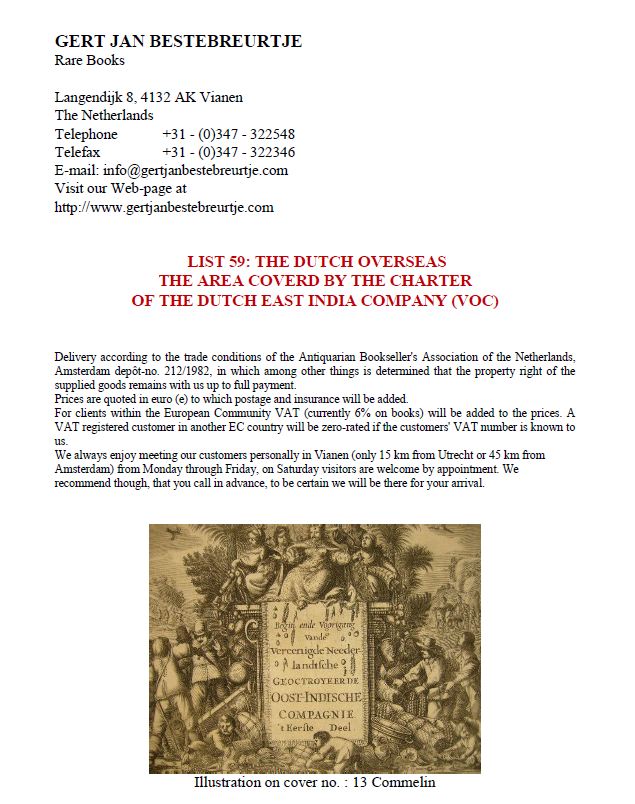 Gert Jan Bestebreurtje Rare Books has released their List 59: The Dutch Overseas. The Area Covered by the Charter of the Dutch East India Company (VOC). The Dutch East India Company essentially ruled the area of today's Indonesia, and a few other places, for two hundred years, from 1600-1800. It was almost a government unto itself in the days when the Netherlands was a major sea power. It exploited the land and its people, made lots of money, and could push back anyone who got in its way. However, all good things come to an end, and by the late 18th century, it all came tumbling down. The Dutch government would come to rule the Dutch colonies while the VOC became a part of history, but no longer a part of the present, at the beginning of the 19th century.


Bestebreurtje's catalogue is divided into two parts. We will focus on Part I. This section contains the older, mainly contemporaneous material, items which are the most collectible. The second part contains more recent items, many more of reading than collecting interest. However, this is the larger part of the catalogue and those interested in more recent material on the subject will want to obtain this catalogue. Here, now, are some of the older items.


We will start with a major early collection of Dutch voyages: Begin ende voortgangh van de Vereenighde Nederlantsche Geoctroyeerde Oost-Indische Compagnie (beginning and development of the Dutch East India Company). While many of the voyages pertain to areas colonized by the VOC, others traveled to unrelated areas, such as Barentz' discoveries in the Arctic. Additionally, there were circumnavigations, voyages that passed through the East Indies, but other areas as well. In all, 21 voyages are covered by editor Isaac Commelin's collection. For many of the voyages, this was either the first report, or provided detail not previously available. Offered is the third, and “best” edition (1646) as Commelin was able to gain access to some unpublished accounts that were first published in this edition. Item 13. Priced at €68,000 (euros, or approximately $90,966 in U.S. currency).


Item 47 is another collection of Dutch voyages, but one published over a century later: Nederlandsche Reizen, tot bevordering van den koophandel... (Dutch travel to promote commerce). These were Dutch voyages to the far corners of the Earth, with accounts of the adventures and obstacles the explorers faced. It contains 13 volumes (bound in five), beginning with an introduction, the first three volumes covering pre-VOC voyages, and the remainder voyages taken on behalf of or contemporaneous with the VOC. It was published by Petrus Conradi and V. van der Plaats from 1784-1787. €3,250 (US $4,346).


Shipwrecks make for bad experiences, but good stories. Andries Stokram provides such a story in Korte beschryvinge van de ongeluckige weer-om-reys van het schip Aernhem (short description of the unfortunate return voyage of the ship Aernhem). Seven ships left Batavia in late December of 1661, loaded with goods for the Netherlands. The weather was not cooperative. A huge storm appeared while they were off the coast of Mauritius in the Indian Ocean, rising to hurricane strength. Four of the ships went down, three never to be heard from again. The fourth, the Aernherm, sunk, but around 100 of the men survived. They holed up on Mauritius for several months, which apparently was a nice place to land if you have to be shipwrecked. It had previously been a Dutch colony, but was abandoned between 1658 and 1664, with Stokram and his fellow sailors arriving right in the middle of this period. It took awhile for them to get used to the deserted island, but once they did, they found food to be plentiful and life quite nice. Most were reluctant to leave, but eventually, they all hooked on with various passing ships, Stokram returning to the Netherlands to publish his book in 1663. Three other survivors also wrote books. Item 57. €950 (US $1,270).