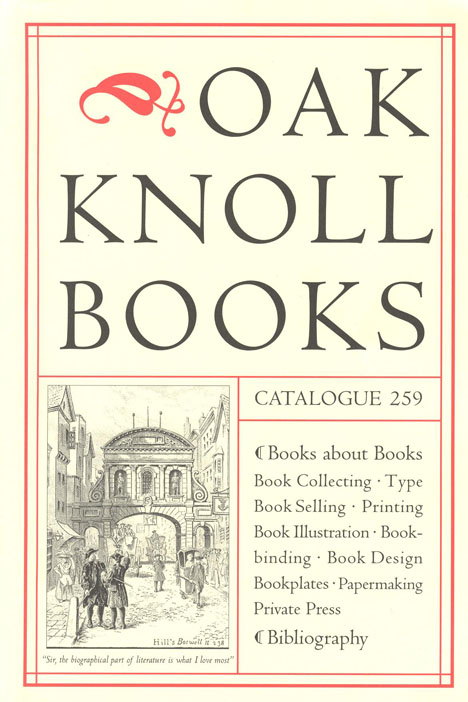 Oak Knoll Books is one of today's most prodigious book catalogue publishers. They regularly publish catalogues in their specialty, and most carry around a thousand listings. They have now issued their 259th catalogue in the field of books about books, and it offers 978 listings. We will offer just a handful of examples, though they may not be the most typical listings. Among the other 970 entries you will find much material about the details of book publishing and printing, including such specialties as papermaking, marbling, typography, binding, private presses, illustrations, and bibliography. For those interested in the details of book production, Oak Knoll catalogues are a requirement.

One of the most collectible and favorite American books of all time is Audubon's "Birds of America." What can be forgotten is that while one of the earliest, he was not the first to study American birds. Item 6 is a book that will tell you more about the pre-Audubon era, and some of the books that would form such a collection. Written by Elsa Allen and published in 1979, the book is The History of American Ornithology Before Audubon. Priced at $45.

An important biography of the nation's first president, aptly called George Washington, was published by an obscure New Jersey teacher in 1897. It looks at how the times shaped the man, and how that great leader in turn shaped his times and, ultimately, the nation in which Americans live today. However, what makes this biography particularly intriguing is that its obscure author, fifteen years later, would himself rise to the high office Washington had pioneered, president of the United States. The author is Woodrow Wilson. Item 628. $75.

Everyone knows George Washington was America's foremost "founding father," but who was its "founding horse?" The answer is Messenger. Messenger was a successful if not spectacular English racehorse brought to America in the 1780s not to run, but to sire. What a tough life. In a nation of ordinary horses, Messenger brought a pedigree that would enable the country to develop a stock of racehorses. His descendants today fill the nation's race tracks, both thoroughbred and trotters. Descendants include such names as Man o' War and Secretariat from the thoroughbred side, Hambletonian from the trotters. His influence is far more widespread than Messenger could ever have imagined, if a horse can imagine. The book is Messenger: The Great Progenitor. Published in 1935. Item 203. $275.

Item 304 is the program for an exhibition held in Leipzig to honor the 500th anniversary of Gutenberg's invention of the press. The book, which details the exhibit, was helpfully translated from German to English to assist English-speaking visitors. Still, one wonders how many such visitors attended. The title is Gutenberg, Reich Exhibition, Leipzig, 1940. How many English speakers would have wanted to travel to Germany in 1940? $35.