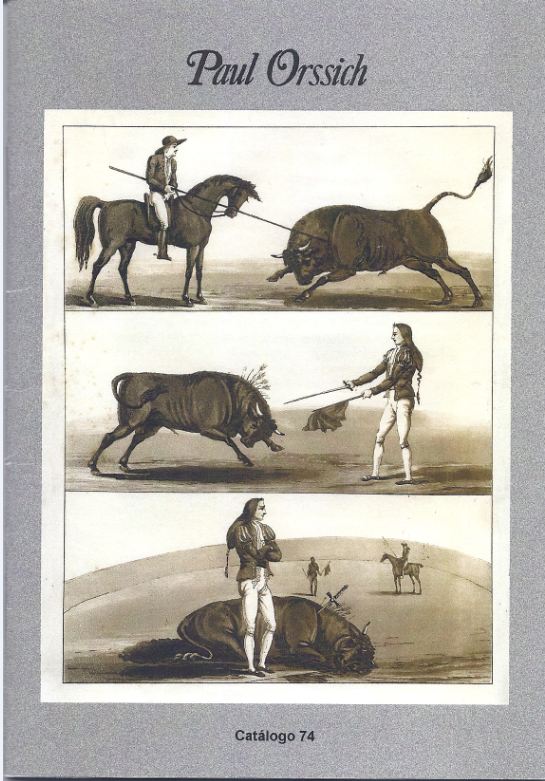 Paul Orssich has released Catalogo 74. If it is a “catalogo,” it must be Spanish. This one primarily features works relating to Spain, though Portugal and Spanish America make a few appearances, as do other parts of Europe. Orssich is a London bookseller, so many of these titles are in English. These are mostly books written by visitors from England to Spain, be they diplomatic, military, or just tourists. While these books are written in English, just a caution here for catalogue readers – the catalogue is in Spanish. English speakers will have no trouble recognizing the titles in English, but books written in Spanish and described in Spanish will, not surprisingly enough, require some knowledge of Spanish to decipher. These are a few of the books Orrsich is offering in his 74th calatogo.


Item 64 is Papers Relative to the Rupture with Spain. In English and French. Published by Authority. Anything published by “Authority” should be taken seriously. The date was 1762, near the end of the Seven Years War, or in America, the French and Indian War. The book includes correspondence between William Pitt and Spanish authorities. It includes information concerning the war in America. The Spanish stayed out of the French and Indian War for most of its duration, but late in the war, joined the side of the French. It was not necessarily the wisest move. The British seized Havana, a key post, from Spain. After the war, Spain was forced to negotiate with Britain to get it back. Ultimately, the deal was for Spain to give Florida to Britain in return for Havana, whereby the defeated French gave the Louisiana Territory to Spain in consideration of their losing Florida for their efforts helping France. Priced at £320 (British pounds, or about $517 in U.S. dollars).


Item 61 is A Narrative of the Campaign of the British Navy in Spain, Commanded by His Excellency Lieut.-General Sir John Moore, a second edition published in 1809. It is filled with Moore's papers and letters. Moore kept a meticulous record of all his military activities. However, the work had to be compiled by his brother, James Moore, as John was no longer around to oversee the publication. Spain, as was the case back at the time of the unsuccessful effort in the French and Indian War, was usually allied with France against England. This continued into the Napoleonic era, when they assisted the French against Britain. However, after France sent troops through Spain to combat British ally Portugal, and then refused to remove them, the friendship wore down. Napoleon set up a puppet government in Spain, which in turn led to rebellion and what would become known as the Spanish War of Independence. For the British, in 1808-1809, this was known as the Peninsular War, and the British were allied with the Spanish people if not the government. After going through various commands, Sir John Moore was placed in charge. The overmatched British were on the run and were attempting to escape by boat from the port of Corunna. The French were determined not to let them out alive. Moore did an excellent job defending his troops in the Battle of Corunna so they could live to fight another day, but Moore himself did not. He was fatally wounded in this battle the same year that his book was published. £320 (US $517).


Captain Robert Batty was another British officer who would serve in Spain and France during the war against Napoleon. However, his tour would come several years later, when it was Napoleon, not the English, who were on the run. Batty had studied to be a doctor, but chose the military life instead. He had an additional skill that enabled him to record what he saw better than most – he was a skilled artist. Batty served in the latter stages of the war, including Waterloo, where he was wounded (though not seriously). He wrote about the war in his book Campaign of the Left Wing of the Allied Army, in the Western Pyrenees & South of France, in the Years 1813-1814... It includes many of his original illustrations, though what he drew were scenic views of nature and cities, rather than battle scenes. Item 3, published in 1823. £1,350 (US $2,177).