Acquisitions From Australia And Beyond By Hordern House 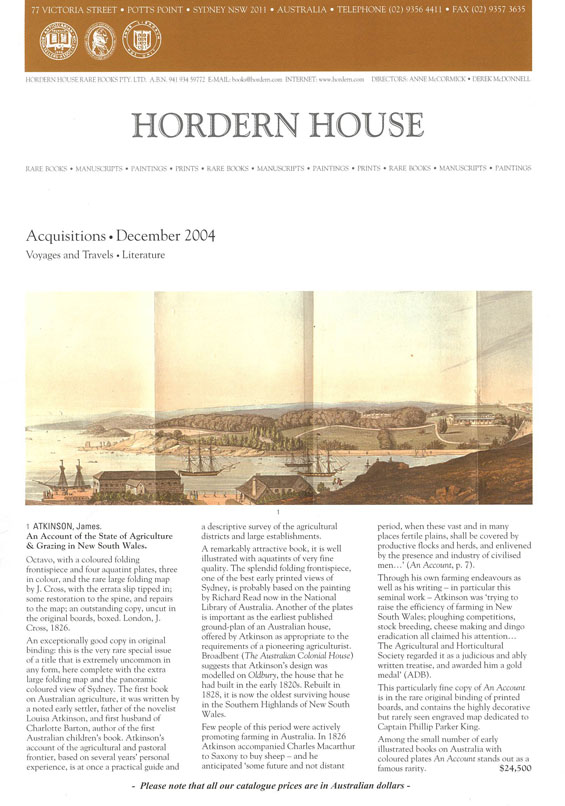 Acquisitions From Australia And Beyond By Hordern House

Hordern House is a major Australian bookseller, so it is no surprise that their catalogues are filled with Australian items. If you collect Australiana, you should not miss them. However, Australia is not a limiting factor. Many of their books may have an Australian connection, but fit more closely with other collections, such as travel and voyages, or even Americana. And then, there are a few with no obvious connection to Australia beyond the fact that they were owned by an Australian. So we will take a look at their latest catalogue, "Acquisitions December 2004," but don't make any assumptions about what you will find.

Item 33 is an example of a piece of Americana with an Australian connection. It is an agricultural almanac printed in Lancaster, Pennsylvania, in 1887. Along with the usual stuff about calendars and phases of the moon, there's a story called, "A Desperate Encounter with a Kangaroo." This is not about an escapee from the Lancaster Zoo, but about a man who visits Australia's "Outback," and finds himself in a life and death struggle with a crazed marsupial. Fortunately, his canine companion saves his life, establishing why it is not kangaroos who are man's best friend. Priced at Australian $750 (US equivalent $573).

Here is another piece of Australio-Americana (that's probably not a word), George Barrington's A Voyage to New South Wales... This is the 1801 second edition of the book which was only the second work on Australia published in America when it first appeared in 1796. This is also the book through which most Americans first learned about Australia. That was unfortunate, since the book was a fraud. So was Barrington. He was a notorious pickpocket, who was transported to the penal colony in Australia for his errant ways, but managed to earn his way into the good graces of his jailers. He was freed and became a celebrity. However, none of this has to do with the fraudulent nature of this book. The fraud is that it was not even written by Barrington. It was written by someone who stole his recognizable name, figuring it would help sales. Item 4. $550 (US $420).

Here is one more piece with an Australian-American connection. It is Poems by Robert Southey by...you guessed it. Southey was an English poet, but his "Botany Bay Eclogues," contained in this book, dealt with the misery of British criminals transported to Botany Bay, Australia. Item 9 is the Boston 1799 printing of these poems, and it too is one of a very small number of Australian-related items printed in America in the 18th century. $2,800 (US $2,136).