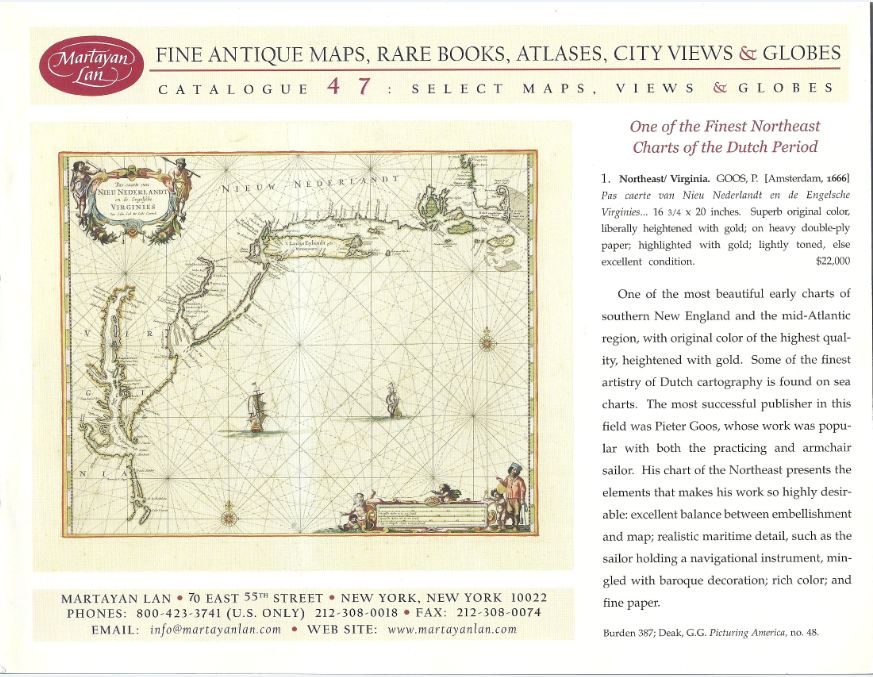 Martayan Lan has issued their Catalogue 47: Select Maps, Views & Globes. It offers a selection of early maps, some dating back as far as the first few decades of the 16th century, mixed with some antique views and globes. About two-thirds of the material pertains to America, with the rest of the world filling in the balance. This is top tier material with many items of particular historic importance. Next we will look at a few specific items.


There is probably no more significant obtainable map for Americana collectors than this one. Item 4 is the Tabula Terre Nove by Martin Waldseemuller, the 1513 edition. It is the first acquirable separate map of America, originally appearing in the Strasbourg edition of Ptolemy's geography. Waldseemuller's map was first published in 1507, a map now known only in one copy. He named America for Amerigo Vespucci on that map, but the name of America has disappeared from this 1513 issue. It is likely Waldseemuller at first thought the land was discovered by Vespucci, but by 1513 realized the honor belonged to Columbus and removed Amerigo's name. It was too late. Among the features are the Gulf of Mexico and what appears to be the first representation of Florida. This part is a bit tricky, since Florida was not officially discovered until 1513, but the representation is so clear it seems there must have been otherwise unrecorded information brought back by other seafarers. Interesting is a river delta west of Cuba. Its location would most conform with the Rio Grande, but it could be a misplaced Mississippi, or some have speculated even the Ganges, as it was still unclear at the time whether America was part of Asia. What must have been one of the most dramatic effects of this map, Martayan Lan points out, is the sheer size of America, though most of it bleeds off the map to the west. Nonetheless, it is still many times the size of the Iberian Peninsula which appears in the northeastern corner of the map. Europeans must have been amazed. Price on request.


More obtainable is Fries version of the Waldseemuller map, here in the 1525 second issue. The map is similar to Waldseemuller but includes new vignettes, and attribution of the discovery of America to Columbus. It calls the land “Terra Nova” instead of “Terra Incognita” (New World instead of Unknown World), and on the verso has a woodcut of Columbus meeting a native in the New World. Item 5. $20,000.


Item 2 is a double-polar projection map from 1593 by Cornelis de Jode. The circular maps are centered on the poles, revealing northern and southern hemispheres as imagined a hundred year after Columbus. Much had been learned, but much remained to be learned. North America, even the east coast, was still little explored at the time. A large bay runs deep into the continent, likely a combination of the Gulf of St. Lawrence, the St. Lawrence River, and perhaps a Great Lake or two. Japan lies squeezed within a narrow channel that divides North America from Asia. The Arctic is divided into four land masses, but de Jode has considerately left a channel between them and northern Canada, enough room to encourage centuries of searching for the elusive Northwest Passage. For the southern hemisphere, the mythical huge southern continent dominates the landscape, a land mass assumed to exist to balance out the greater amounts of land in the northern hemisphere. $68,500.


Next is a map described by Kohl as “the mother and main source of all the later maps” depicting the American interior. It is the Carte De La Louisiane Et Du Cours Du Mississipi... by Guillaume De L'Isle. The map has also been described as “the first large-scale map accurately showing the lower Mississippi River and surrounding areas.” It covers more, ranging from the east coast to the Rocky Mountains all the way north to Canada. Portrayals more deeply into the interior are not quite as accurate, though general estimates of the river system and mountains roughly approximate what would be found, and De L'Isle has noted extant Indian tribes. He has also added the routes of some of the early explorers. One more notable feature of the map is the notation of the “Mission de dos Teijas” in what is today East Texas. It is the first printed map to include the name that would eventually be used to describe the entire state of Texas. Item 6 is the 1718 edition. $25,000.