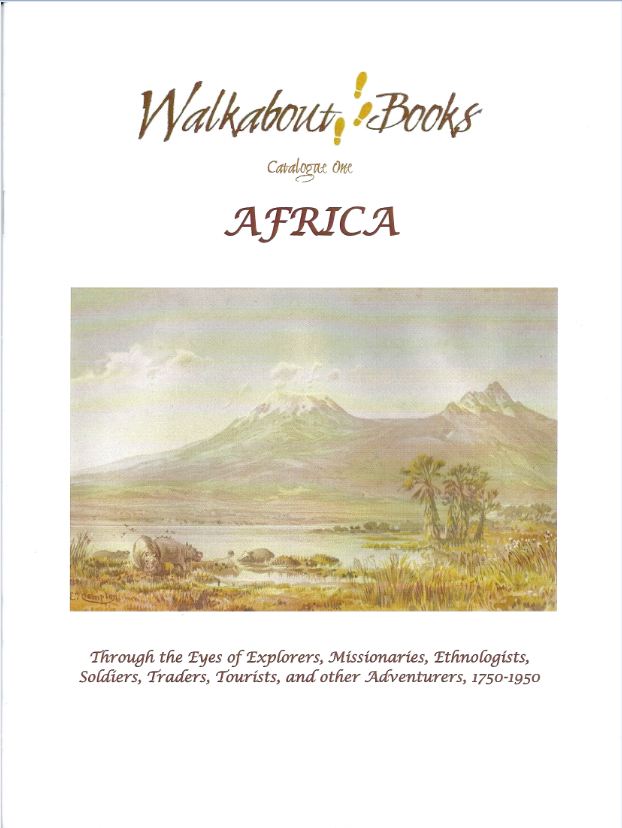 This month we received the first catalogue from Walkabout Books of Xenia, Ohio. It is the first catalogue we have received from a bookseller in a town beginning with “X” (I have not looked this up, but assume it is true). Xenia is located near Dayton, which is located near Cincinnati. Walkabout Books describes itself as “an antiquarian bookstore specializing in the literature of travel and adventure, including travel narratives, exploration, mountaineering, and other outdoor pursuits.” In other words, they specialize in books filled with wonder and excitement, yet excitement that is real, not fiction. The firm is owned and operated by Elizabeth Svendsen, herself a traveler with a varied background, including eight years in the bookselling profession.


Catalogue One is entitled Africa, subheaded, Through the Eyes of Explorers, Missionaries, Ethnologists, Soldiers, Traders, Tourists, and other Adventurers, 1750-1950. As such it is more varied than the typical exploration catalogue that is focused on the professional explorers. Here we also get to meet the missionaries, people who came to “save” the Africans, and meant well, but often had a dim view of their culture or development. Probably the most common word in these books titles other then “Africa” is “savage.” Often, Europeans managed to ignore their own more refined forms of savagery. For example, there were the traders, who often traded in humans, the slave trade. There are the soldiers, who came to fight and conquer, and then the tourists. This latter group didn't live in such rough conditions. They rarely starved, were attacked, or sold into slavery. Their adventures may be far less dramatic, but it may also be easiest to relate to them. Their adventures are the ones we could experience. Let's take a look inside the catalogue to see what is hiding in the jungles of what was once, to outsiders, “Darkest Africa.”


Item 97 is Voyages to the Coast of Africa by Mess. Saugnier and Brisson... the 1792 first edition in English. Saugnier and Brisson were involved in separate shipwrecks off the coast of Africa in 1784 and 1785. Saugnier was captured by Arabs and enslaved. He was traded from owner to owner, but apparently was not terribly abused. Eventually, French and English merchants were able to free him. He returned to France where, you might think, he would have become an abolitionist. Not at all. He returned to Africa to be come a slave trader. The book includes information on conducting trade in Africa, particularly the slave trade. Priced at $900.


Item 56 is a story with a message, a controversial one at that: Liberia; or, Mr. Peyton's Experiments, published in 1853. Author Sarah Josepha Hale was an opponent of slavery, but her focus here is not on ending slavery, as was Uncle Tom's Cabin, released around the same time. The Mr. Payton of this tale is a slave owner who wishes to free his slaves. However, he is concerned for their welfare once they are free. You can tell this is going to be a work of fiction. He tries sending them as freemen to a farm in the South, an industrial town in the North, and to Canada. They are unhappy in all three locations, constantly harassed by whites. Peyton finally finds the solution. Following the advice of the American Colonization Society, he ships them to Africa, where they can finally be free of intimidation by whites. My guess is that Ms. Hale didn't find too many promoters for her proposal, from either slave owners or abolitionists. Sarah Hale was an influential writer, editor, and promoter of women's education. She was instrumental in convincing President Lincoln to declare Thanksgiving as a national holiday. And yet, what she is most remembered for today is a silly children's rhyme she wrote, Mary Had A Little Lamb. $300.


Item 88 is the work of an amateur explorer, a man who set out to Africa alone several times, self-financed: Savage Africa: being the narrative of a tour in equatorial, south-western, and north-western Africa; with notes on the habits of the gorilla; on the existence of unicorns and tailed men; on the slave trade... This all made sense until we got to the part about unicorns and tailed men. W. Winwood Reade first set off for Africa in 1861. His work has been described as “essentially the work of a dilettante,” but that is likely unfair. Reade traveled extensively in out of the way places, and later became a regular correspondent of Charles Darwin, whom he supplied with information on natural histories the latter used in developing his theories. Reade's thoughts on the futility of missionary work and the value of polygamy to Africa were defended by Richard Burton. He is noted for providing valuable information on the gorilla, not well known at the time. As for his comments on unicorns and tailed men, Reade simply recounts supposed eyewitness accounts of others, making no claims to having observed such creatures himself. He tends to believe in their existence based on numerous claimed sightings, though reaching no definitive conclusions. $150.