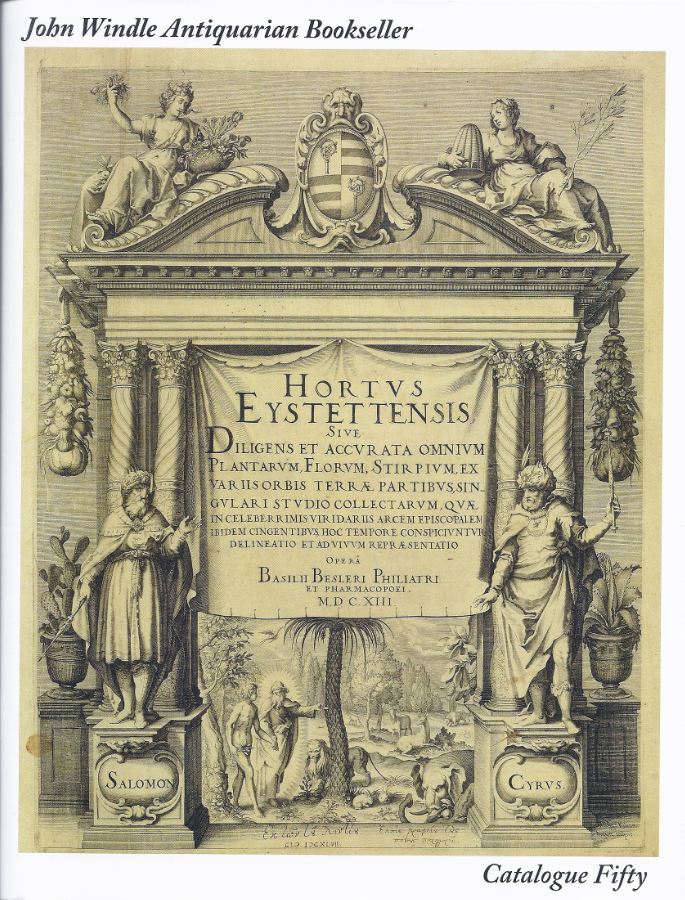 John Windle Antiquarian Bookseller has issued Catalogue Fifty. Windle, after 45 years in the book trade, is not a promiscuous cataloguer. This is his first in over a year. What this does allow for is much material that is new and worth the wait. Windle offers top notch, highly collectible works. Beyond that, we won't attempt to describe what is in the catalogue as it is a variety, although we do note much in the way of private press and other books that fit the description of art as well as text. Rather, we will take a look inside at a few examples.


Item 61 includes the earliest photographs of Yosemite you are likely to ever obtain. Joseph Le Conte, a geology and natural history professor at the newly formed University of California, set out with a group of students and others (including John Muir) in 1870 for six weeks on the land. At that point, Yosemite was mostly unknown to outsiders, the first significant visits by whites not occurring until the 1850s. Le Conte would later write, “I never enjoyed anything so much in my life.” Yosemite is one of the most beautiful and spectacular places on earth, and one can only imagine what these people experienced on seeing it for the first time. In 1875, Le Conte published, A Journal of Ramblings through the High Sierras of California by the “University Excursion Party.”  It is his account of a journey that included both Yosemite and the Sierra Nevada and includes nine mounted photographs, eight in the mountains, and one in San Francisco where the party broke up. Although this first edition states only 20 copies were printed, it appears that the actual number is perhaps around 120, ten for each of the 12 members of the party (or 12 for each of the 10 members, I have seen it described both ways and am unsure which is right). This book is included among the Zamorano 80 of most collectible California books. Priced at $9,500.


Item 3 is L. Frank Baum's first attempt to put his creative genius telling children's stories to paper. It was not, however, his first children's book published. His Father Goose and even The Wizard of Oz were published slightly earlier. This book is A New Wonderland, and Baum had written it several years before. Baum used to make up stories to tell his children, and his mother-in-law, suffragist Matilda Gage, encouraged him to write them down. The publication of his New Wonderland was delayed for various reasons, but with the emerging success of his other books, this one was released in 1900, slightly after the first of the Oz books. The inspiration, quite naturally, for this and his strange world of Oz, was quite naturally Lewis Carroll's Wonderland of Alice. Baum's name for his new Wonderland is the similar sounding Phunnyland. While this was the first children's book Baum wrote, it should be noted that he earlier wrote about raising poultry, the Hamburg breed in particular. $6,950.


Item 56 is the most celebrated of all private press works. William Morris, a poet, writer, artist, and political (socialist) advocate practically invented the modern concept of the private fine press late in his life when he opened the Kelmscott Press. He wished to resurrect the quality and individual handwork of printing of the earliest, 15th century printers. Morris was, in a manner of speaking, picking up where Gutenberg left off. He opened the press in 1891, at which point he was already conceiving his masterpiece. It would take almost four years to complete the project, but in 1896, the year Morris died, he published The Works of Geoffrey Chaucer. Most now simply refer to it as the Kelmscott Chaucer. This copy comes in a Guild of Women Bookbinders binding. It is otherwise hard to describe the art of this book with words, but we will assume anyone seriously interested in purchasing a Kelmscott Chaucer is already quite familiar with it. $95,000.