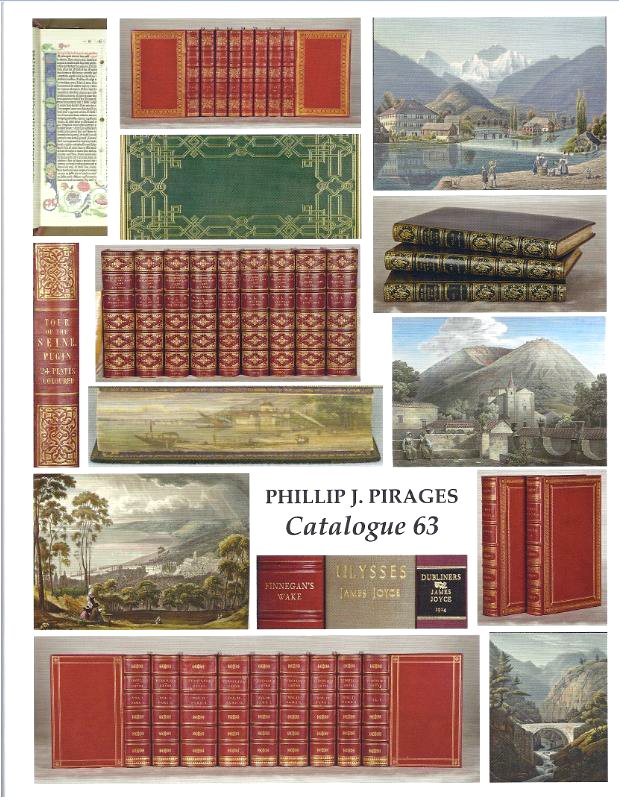 Phillip J. Pirages Fine Books and Manuscripts is now offering their Catalogue 63: A 19th and 20th Century Miscellany, including many modest items. We presume those “modest” items refer to modestly priced items, rather than being some kind of a moral judgment. Pirages provides us with a striking catalogue, filled with thorough descriptions and images, despite there being over 500 items presented. This is accomplished by creating a catalogue the size of a medium-sized telephone book, 308 pages in all. The material is sufficiently varied to make it difficult to describe, so we will stick with the bookseller's description - a “miscellany.” You might find anything here, sort of like that telephone book. Here is a look at about 1% of what is offered.


Here is one of those apparently “immodest” books, though one would hardly think so considering the original recipient was a man of the cloth: Letters of James Boswell, Addressed to the Rev. W.J. Temple, Now First Published from the Original MSS. James Boswell, more often just known as “Boswell,” was a Scottish lawyer and writer whose lasting impact comes through the biography he wrote of the English lexicographer and wit Samuel Johnson. Boswell managed to get into the literary circles of his time which allowed for his association with Johnson. The Rev. Temple was a personal friend through most of Boswell's life, and these letters reveal more about his inner thoughts. The letters were first published here in 1857, over 60 years after Boswell died. A tipped in letter from an earlier owner, Lady Amscott-Ingilby, notes that this book is not recommended “for the young ladies' reading” on account of its indecencies. Item 82. Priced at $275.


Mark Twain found humor in just about everything. Here is an exception. He often found himself in a financial squeeze, so one thing he did not appreciate was someone else exploiting his name for their financial gain. In 1902, the Boston publisher Small, Maynard & Company printed an item called The House Party, purporting to contain stories submitted by 12 writers from a list of 25. They were published anonymously, and readers were invited to send in their guesses as to who wrote each. The first to correctly identify the authors was to receive a $1,000 prize. However, submissions had to be made on a form bound into The House Party. In other words, you had to pay to play, by buying the publication. An angered Twain wrote an article condemning the scheme for the North American Review, which he titled The Game as Played Up North. Item 117 is the autograph manuscript of this article. He had contacted 16 of the authors and found they either had not participated in the writing, or did not realize there would be an element of gambling involved. In his article, Twain condemns the scheme as being an illegal lottery with but a slim chance of winning. He then goes into what really bothered him, that his name was being used without his permission. The manuscript was sent to Clara Spaulding Stanchfield, a childhood friend of his wife and now a close family friend. The text is signed twice as “Mark Twain,” while the cover letter to Stanchfield is signed with Twain's actual initials, SLC. The article was never published. $20,000.


Here is a book that used every word you could possibly imagine, though most but once. This, naturally, would be a dictionary. Item 489 is the most important American dictionary ever published, the 1828 first edition of Noah Webster's An American Dictionary of the English Language. It contains 70,000 entries, all compiled by Webster himself. There were only 2,500 copies printed of the first edition, but Webster's work has gone on to be likely the best selling book ever originating in America. $22,500.


Here is a subject that doesn't often warrant its own book: Documents Relative to an Investigation of the Manner in which the Funeral of the Late Matthew Boulton, Esq. Was Furnished. Pirages explains that this item arose from “a lawsuit with attendant publicity that mushroomed to ridiculous proportions.” One George Lander had been hired to furnish headbands and scarves for the funeral of Matthew Boulton, who died in 1809. Apparently the quality was not very good, but even more upsetting to Boulton's only son, Matthew Robinson Boulton, was the bill – almost £545. That may not sound exorbitant until you realize that in today's currency, that is the equivalent of £31,000 or $50,000. Along with suing Lander, the younger Boulton made the public aware of the injustice in this pamphlet, which provides details of comparative pricing to make its point. Item 84. $350.


George Lander was not about to allow his good name to be besmirched, so he responded (also in 1811) with An Answer to the Pamphlet of Matthew Robinson Boulton, Esq. of Soho. Both of these pamphlets are quite rare. By the way, the deceased senior Mr. Boulton was a wealthy man, a business partner of inventor James Watt who made major advances in the design of steam engines. Item 85. $350.